For a long time I had wanted to image a satellite against another solar system body. On Wednesday, January 9, 2002, the moon was in a low phase situation and we were experiencing a rare clear morning where it was actually possible to spot the moon on the eastern horizon as it was rising above Galveston Bay. I attached my black and white video camera to the prime focus of a Celestron 8 telescope and fed the output into a Sony TRV35 camcorder. There were five possible satellite transits that morning. The second one was that made by Cosmos 2297 rocket body. Using a f/6.3 focal reducer to slightly enlarge the field of view, I lay in wait as the track was predicted to cross the dark side of the moon at 10:41:29UT. At this precise moment, a small faint white dot zoomed across the camcorder screen. Taking about 1.3 seconds to traverse the field, there was absolutely no doubt that this was the rocket. The three images below were snapped from the tape and show the path from right to left. During the transit the rocket was 2521km away from my site at NASA Johnson Space Center. The moon was at elevation 9 degrees, azimuth 117.

I also observed and videotaped another transit–Cosmos 2292 rocket–at 1113UT. By this time the elevation of the moon had risen to 17 degrees, but this time the satellite was a bit fainter than Cosmos 2297 rocket.

Now we turn to a 55% sunlit moon and the transit of another satellite, Cosmos 2360 which crossed the moon on the dark side at 0228UT on February 21, 2002. The object was also sunlit and passed across the moon at a much more rapid pace since the slant range was only 926km. The edge of the dark side of the moon where it transitions to space is a bit hard to see in the pictures due to compression of the images. Yet, the bright short streak in the top image shows the satellite moving from lower right to upper left as it passed nearly overhead from Houston. The satellite appears as a streak because the frame grabber is unable to separate the 1/30 image as a starlight point due to the high angular velocity compared with the first set of images. Also the dark side shows some spillover of moonlight which makes it rather difficult for the camera to distinguish the contrast of both very bright and very dim objects. 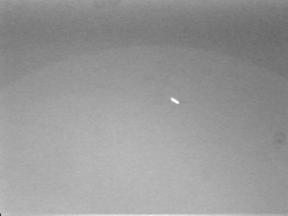 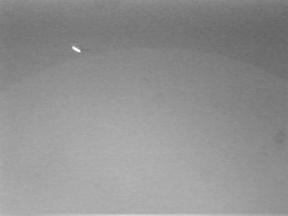 After several years of trying I finally captured the ISS on video transiting the moon on September 3, 2002 at 1018UT from downtown Houston, Texas. In a ground track only 5 miles wide, we followed a GPS reading until we encountered the track which led us to the Veterans Administration Hospital. I set up a Celestron 8 and Watec camera. The moon was 27 degrees elevation and a crescent phase. Using the Dazzle software tool we captured the video as it crossed the dark side of the moon. ISS was at a height of 252 miles, range of 504 miles, phase of 128 degrees.