SATELLITES THAT BLOW UP IN SPACE

Satellites launched into space have been known to explode as a result of accidental or intentional means. The first such breakup occurred in June 1961. Since then around 200 explosions have occurred. Reason: propulsion failures, anti-satellite targeting, collisions, failures of attiutude control systems,  overpressure of residual propellant, battery failures, and other sources.  I have made observations of interest of two types of exploding vehicle classes.

Cosmos 699 was a Soviet naval reconnaisance satellite launched from the Baiknour cosmodrome aboard a Tsyklon 2 rocket. This naval forces monitoring spacecraft was used to determine the position of enemy naval forces through detection and triangulation of their electromagnetic emissions (radio, radar, etc).

“Many members of this class have experienced breakups. Beginning in 1988 old spacecraft have been commanded to lower perigee at end of life, resulting in an accelerated natural decay with fewer fragmentations. For several spacecraft, two distinct events have been detected and observational data suggest that the spacecraft remain essentially intact after each event.  In most cases, breakups occur after spacecraft has ceased orbit maintenance and entered natural decay. Debris are sometimes highly unidirectional. In the case of Cosmos 699, the spacecraft had been in a regime of natural decay for one month at the time of the event.” (from History of On Orbit Satellite Fragmentations 13th Edition, 2004, D. Whitlock et. al.)

Some of this observational data was in many cases obtained from my observations as shown in some of the crudely drawn graphics below.

Initially, as is the case with most spacecraft, once stable in orbit they generally have little, if not slow variation in their optical appearance.  The light curves which follow are hand plotted from visual magnitude observations that I made with a tape recorder from continuously following the spacecraft usually in 7×35 Tasco wide angle binoculars.  The x-axis is elapsed time usually shown in 20 second blocks; the y-axis is the apparent visual magnitude. In some cases multiple visual magnitude scales are plotted on the same graph to illustrate light curves on different dates for the same object. 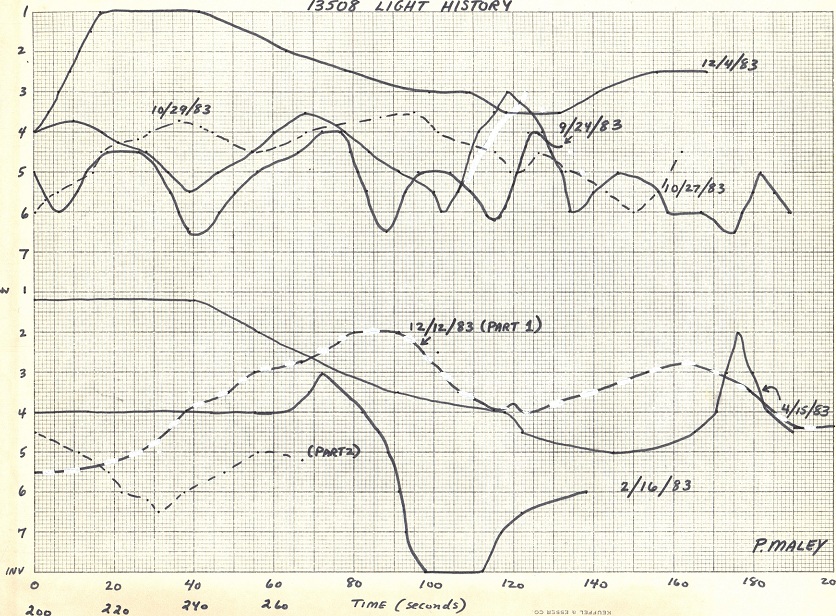 Launched September 4, 1982, it exploded August 8, 1983. Prior to the explosion there was only normal phase variation seen; that is, there was no obvious rotation.

Launched May 7, 1983, it exploded first on March 11, 1985 and again on May 13, 1985.  This was the 12th Cosmos 699 type spacecraft to explode.  In the graph below I was lucky enough to capture light curves (lower part of graph)  in January and February 1985 prior to the first explosion. Then on March 26, 1985 after the explosion (top curve).  Prior to explosion 1 the rotation was gradual with perhaps time between maxima around 120 seconds. After explosion 1 the period between major maxima was around 50 seconds with many irregular features interspersed

In the next graph, you can see light curves on May 27 and June 2, 1985 not long after explosion 2. The time between maxima was then betwen 32 and 36 seconds with secondary maxima sometimes appearing.

Launched  August 7, 1984, it exploded February 23, 1986. It was the 13th Cosmos 699 type explosion.  I observed it before the explosion as shown in the graphic below and then after in the graph that follows it. Not knowing the physical shape of the satellite, it is difficult to establish a clear pattern of variability prior to the explosion.  There are indictions that there is a slow rotation possibly on the order of about 86 seconds confirmed by another observation on August 2, 1985 (not shown here). 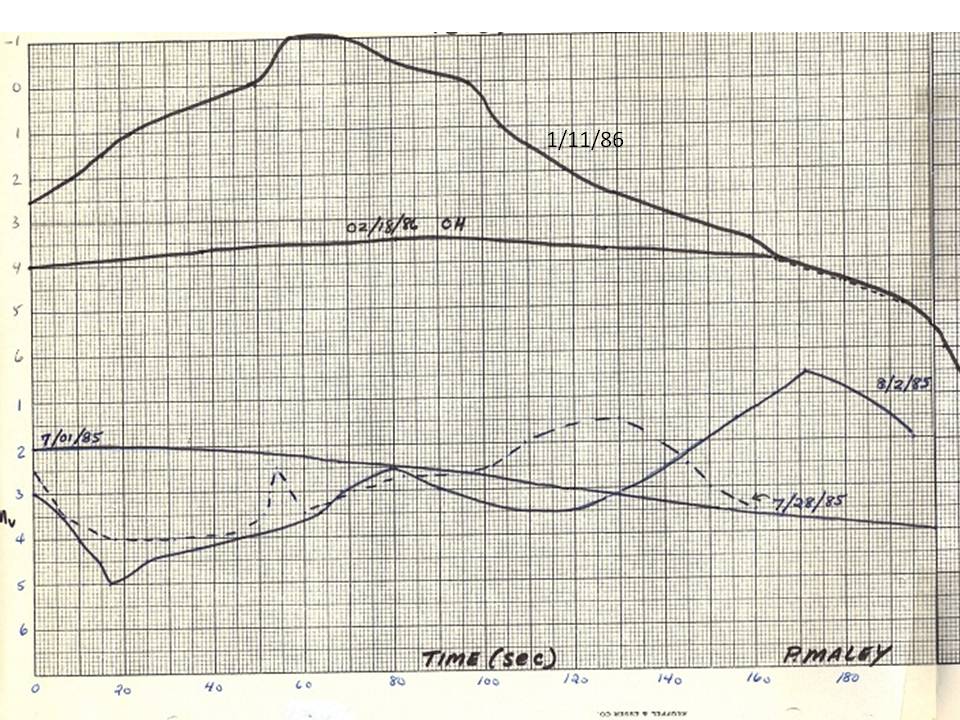 The after explosion light curves suggest an interval that appears on the following light curve (and others not published here) between maximum brightness of perhaps 43 seconds.  This is coincidentally (?) 1/2 the peak to peak interval prior to explosion. The principal satellite appears somewhat fainter after explosion. 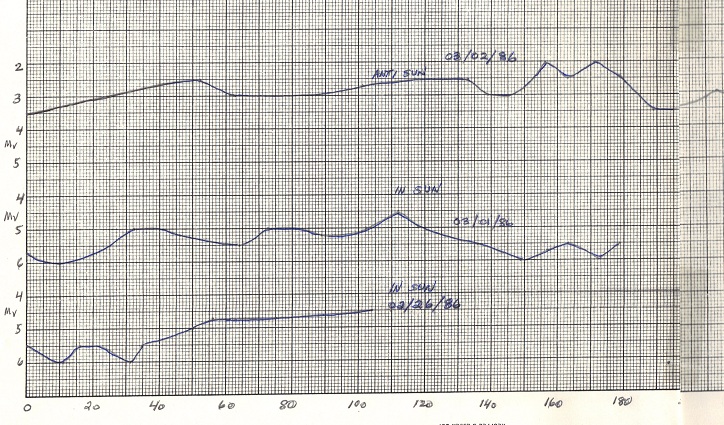 Launched April 18, 1985, it exploded November 20, 1987.  It was the 16th Cosmos 699 type explosion.  From my data the period between maximum brightness varied between 60 and 88 seconds based on observations made between June 25, 1986 and January 17, 1987. The lightcurve was complex on occasion.  Depending on phase angle, the light curve sometimes did not reveal any periodic variation.

The next graphic shows observations made after the explosion where the light curve becomes a bit more complex and the period between maximum brightness is around 42 seconds with subvariations embedded. 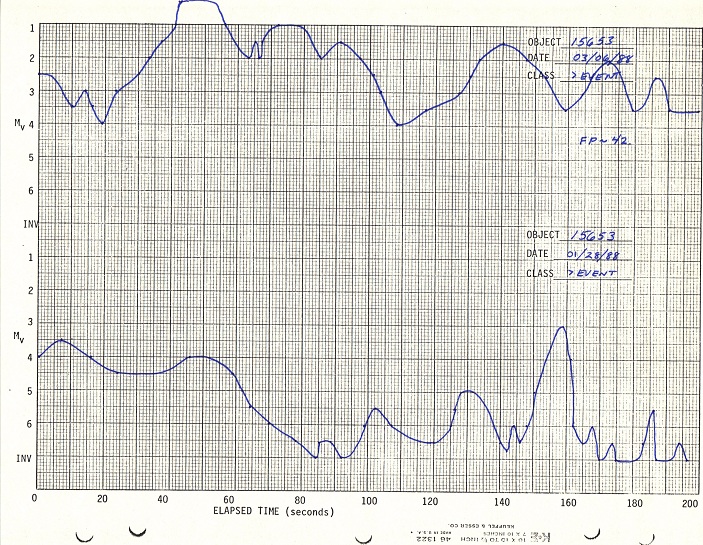 If one follows variations of a satellite’s mean motion over time, you can see from the following graphic that there is a large spike which occurred corresponding to the date of the explosion. 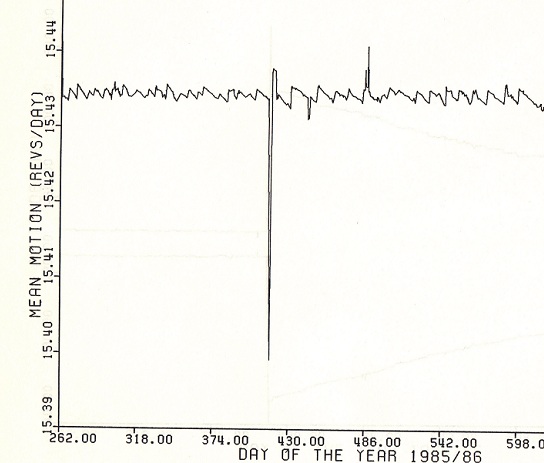 Launched August 4, 1986, it exploded September 21, 1987. This was the fifteenth spacecraft of the Cosmos 699-type to experience a fragmentation in space.  The graphic below shows a pre-explosion light curve and one that was taken after the explosion  The former shows a very smooth variation, the latter one that has variability.  Still another lightcurve taken January 28, 1988 shows an even more irregular pattern (not shown here) but suggesting about 50 seconds between maxima.

Conclusion: Brightness before and after explosion was not significantly different. That is, had much of the physical structure been impacted by the internal explosion, one might expect not only the creation of many debris pieces but that the primary object would appear much fainter after the explosion. In all cases the latter was not true.   One can conclude from this and prior Cosmos 699 type explosions that the vehicle was never entirely destroyed. 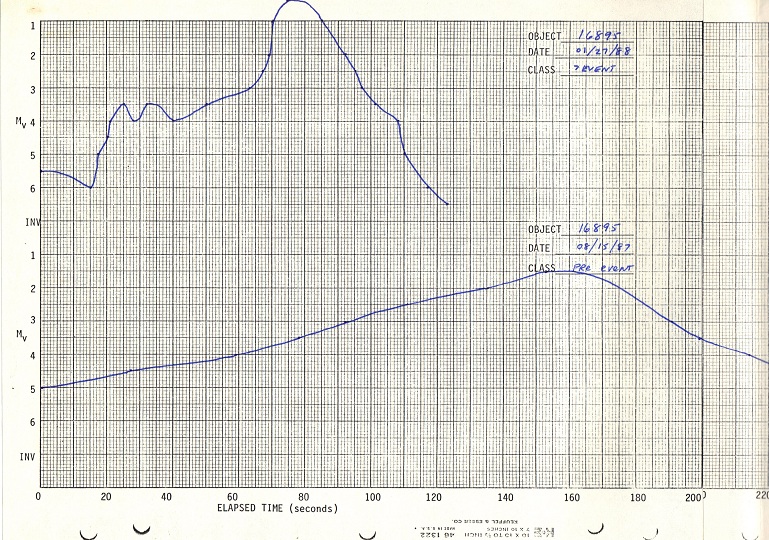 In 2001 I presented a summary of two campaigns that I conducted in 1999 and 2000 to monitor optical characteristics of the Proton 4 ullage motor population located in mainly geostationary transfer orbits.  They are used to resettle propellants between upper stage firings of the Proton 4th stage of SL12 rockets. The study attempted to characterize the intact ullage motors and those that have exploded in space using conventional large aperture binoculars and 3rd generation image intensified video to determine if optical signatures could reveal evidence as to which motors might be candidates for explosions.

Prior to 2001 some 165 explosions had occurred, 14% of which resulting from Proton ullage motors. Since 1983 there was an average of 1.3 ullage motor explosions per year and were one significant contributor to the space debris population.

In the campaign the following graphic shows the absolute magnitudes derived for intact ullage motors during the campaigns.

Then observations were made and absolute magnitudes determined for those ullage motors that had experienced an explosion (following figure). 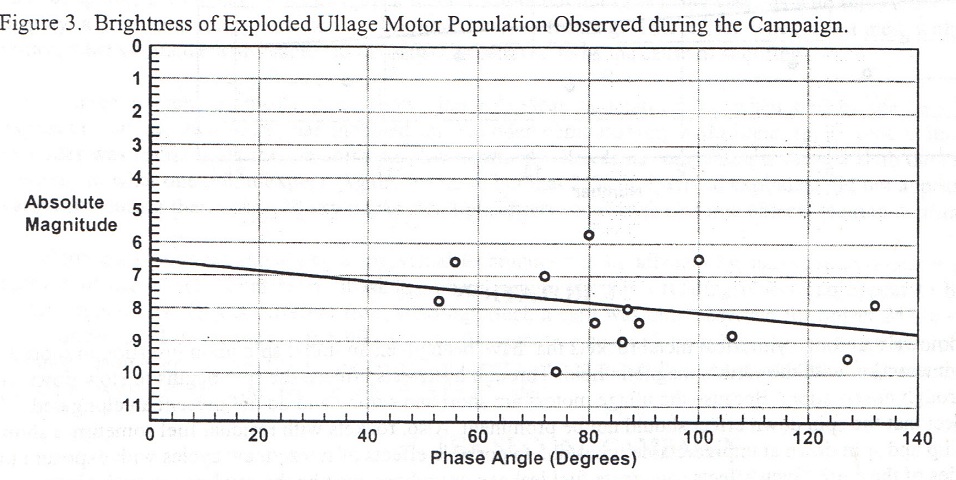 The conclusions of the first campaign were as follows. Fragmentations of ullage motors seem to be random and are not catastrophic. We identified three tpes of optical signatures for exploded motors: non-variant, slow variation, moderate to rapid irregular variation. All three types were also found in intact motors.  At least some explosions must be low energy events or else the rotation of all exploders would be self evident and rapid. Six exceptions to the expected rotation were found and confirmed.

The second campaign found that some signatures changed. Two possible reasons are change in geometry of the motor and accelerations caused by venting of fuel. We further found that of the 19 motors that had been in orbit 5 to 10 years the probability that at least one would explode before being in orbit 10 years was 0.97; the probability of at least one of 46 motors in orbit at that time exploding before decay is greater than 0.9999.  Interestingly, within several months of the presentation of this paper in Evpatoria, Ukraine, another ullage motor exploded.