In October 2014 I led a group of tourists to Churchill to see polar bears for which the area is famed.  At the end of the trip, I accidentally came across information about an expedition to observe an 18th century transit of the planet Venus across the Sun from the Prince of Wales Fort located outside the town.  As intriguing as this was I was surprised to find out that there was no monument or plaque commemorating this exciting time in the history of scientific achievements in Canada.  Thus this author initiated a proposal to the Historic Sites and Monuments Board of Canada to recognize this event. 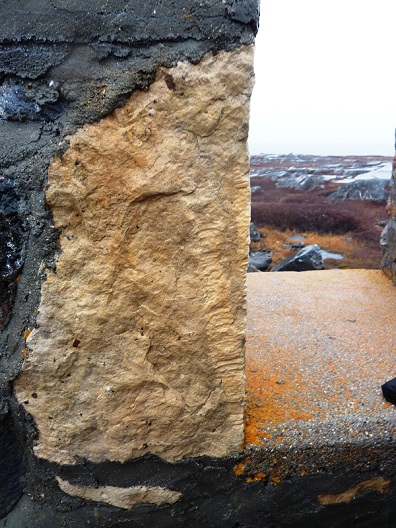 The Royal Society sent a team of astronomers with the support of the Hudson’s Bay Company from the UK to Canada in 1769.  This company controlled much of Canada and several officials in this company were also members of the Royal Society which was engaged in sending out astronomical expeditions.  The lead individual at the Society was the Astronomer Royal who provided procedures for conducting astronomical observations; he assured that the proper hardware was loaned to the team by the Royal Society.  The expedition was blessed by good weather (unlike several other observation posts) and as a direct result, made the only timing of the entire June 3, 1769 transit of Venus from Canada.  The team leaders at Churchill were William Wales and Joseph Dymond; they were two young  men who had worked under Nevil Maskelyne (then the Astronomer Royal), at the Royal Greenwich Observatory.  Maskelyne suggested them as the principal team members to the Royal Society who promptly appointed them and coordinated with the Hudson’s Bay Company for their transportation and lodging. 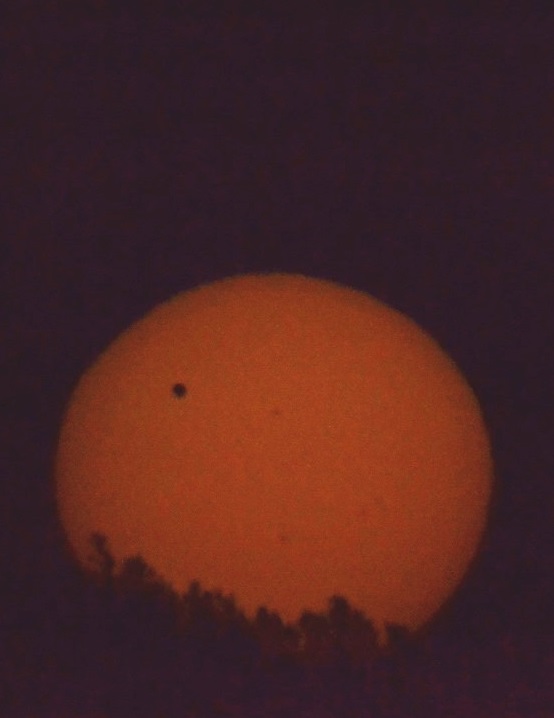 The 2012 transit of Venus is underway at sunrise as seen from Bolivia. P. Maley photo.

Traveling to the Churchill area was not for the faint of heart.  Most months of the year ice blocks Hudson Strait until June.  In order to be sure they made it to the target location by the proper date with enough time to set up the instrumentation and train it was necessary for Wales and Dymond to appear in Churchill a full year before the transit. To serve as a housing for their primary telescope, Wales and Dymond brought with them a prefabricated wooden observatory designed by the legendary British engineer John Smeaton. 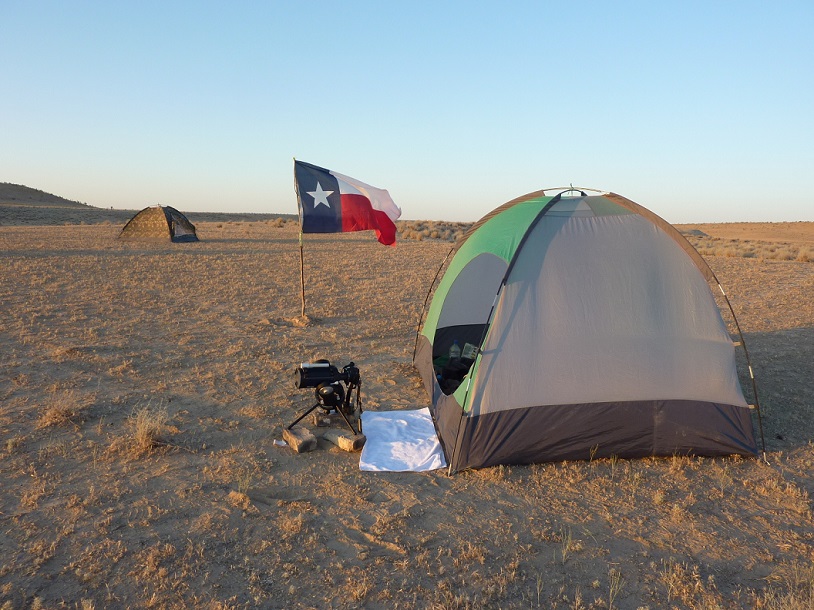 The author organized an expedition to Turkmenistan for the 2012 transit of Venus. Here two of the tents are visible along with the author’s instrumentation. 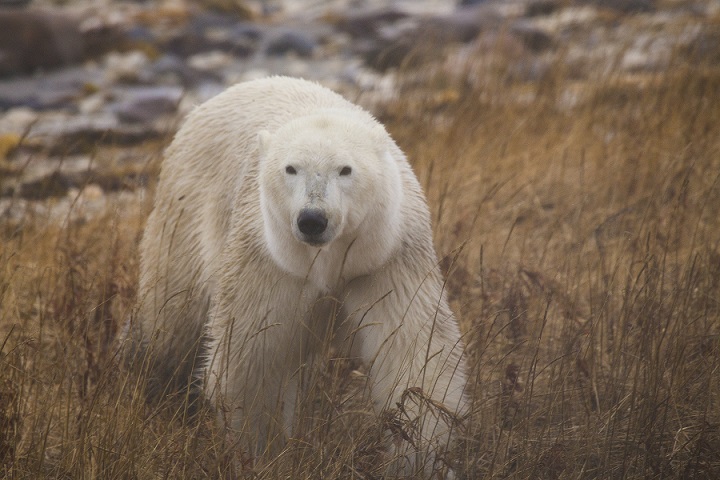 Polar bears prowl the Churchill area which likely was a good reason to stay inside the protected area of the Fort in 1769.  Jeff Pohlman photo.

During their 12 month long advance time at the Fort, Wales and Dymond made hundreds of astronomical observations. They used a Bird astronomical quadrant to find their clock correction, and to take nearly two hundred meridian altitudes to find their latitude. All their observations included thermometer and barometer readings so that refraction could be taken into account. Wales was confused by the large scatter  of latitude measurements; but careful examination now shows that the best values were obtained using the Sun near summer solstice, using stars whose declinations were well-known, and that transited the local meridian at zenith distances less than 10º to minimize refraction effects. 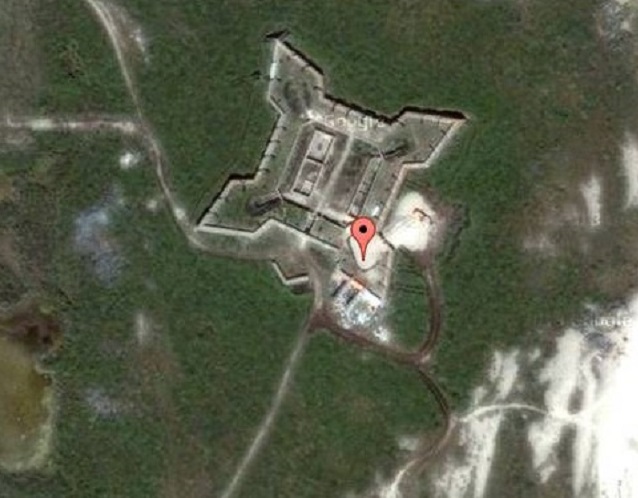 The layout of the Prince of Wales Fort and the location of the transit of Venus observation site at the southeast corner.

As a long time member of the International Occultation Timing Association this author noted that Wales and Dymond observed six occultations of stars by the Moon and one immersion of Jupiter’s large satellite Io. These were instrumental in determining the longitude of Churchill, but additional complementary observations would also have been required in order to serve as a basis of comparison. Results revealed that the Churchill occultation observations were remarkably accurate.  The errors in timing disappearances at the Moon’s bright limb are fairly sizable as was one event which was near grazing occultation.  Yet the timing errors of the remaining five events had very small timing errors.  Dymond and Wales did not calculate or even state their longitude; another investigator several years later used their occultation data along with others to calculate the longitude of the Prince of Wales Fort to within 300 meters / 1000 feet of today’s accepted value.

Within the portable observatory walls, Wales and Dymond utilized two Short telescopes, one with a split objective micrometer attached to it that was used to make 50 measurements of the distance between the limbs of Venus and the Sun. It was also used to measure the angular diameters of Venus and the Sun which can now be used to check the micrometer’s accuracy. 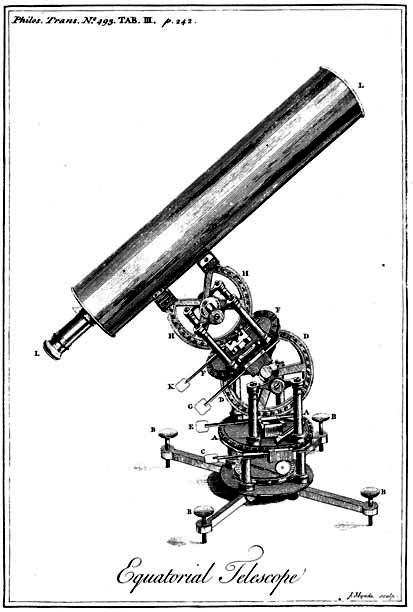 Wales had married Mary Green in 1765, the sister of Charles Green who was the astronomer on James Cook’s expedition to observe the transit at Tahiti. Wales was the astronomer on Cook’s second and third voyages. About 1780, Wales became mathematical master at Christ’s Hospital in London where he was a popular teacher of navigation for the rest of his life. He wrote a number of papers and books, mainly relating to navigation and was appointed to the Board of Longitude in 1795.

After the 1769 transit there is no further information on Dymond. However, it is to be noted that asteroid 15045 was named Walesdymond in their honor. The following text appears to justify the asteroid name:

William Wales (1734-98) and Joseph Dymond (1746-1796) were two young Yorkshire men sent to the shores of Hudson Bay by the Royal Society of London to observe the transit of Venus on 1769 June 3. They stayed for over a year at Fort Prince of Wales, near modern-day Churchill, Manitoba. They had worked under the Astronomer Royal, Nevil Maskelyne, who recommended them for the transit expedition. In 1765, Wales married Mary Green, sister of Charles Green who was the astronomer on James Cook’s expedition to observe the transit at Tahiti. Wales was the astronomer on Cook’s second and third voyages. About 1780, Wales became mathematical master at Christ’s Hospital in London where he was a popular teacher of navigation for the rest of his life. He wrote a number of papers and books, mainly relating to navigation and was appointed to the Board of Longitude in 1795. Nothing is known of Dymond’s career after 1769.
Name proposed and citation prepared by Peter Jedicke and Robert Jedicke, with additional information kindly provided by Peter Broughton.

In late 2014 I submitted a request for the Monuments Board of Parcs Canada to erect a formal marker acknowledging the historical achievement that occurred in 1769.

Fast forward to 2018. Nearly four years after I submitted a nomination for recognition of the Wales/Dymond expedition, the Monuments Board notified me that such a monument was approved at the June 2017 meeting. They note that rather than being considered a uniquely separated event, it was actually part of a larger picture. During that period the Hudson’s Bay Company trading posts in northern Canada were settings for the early practice of science in astronomy, meteorology, cartography, and natural history. The post’s employees incorporated and compiled indigenous traditional knowledge into their cartographic and natural history data. Indigenous persons also took an active role in collecting natural history specimens.  This data was incorporated into growing bodies of knowledge about the earth’s Arctic and subarctic regions.  Therefore the commemoration of the transit of Venus expedition by the Royal Society is to be included as part of an acknowledgement of  “Early Science in Canada and the Hudson’s Bay Company (1768-ca. 1810)”

I received a copy of an email from the Inscriptions Coordinator and historian, Archaeology and History Branch, Indigenous Affairs and Cultural Heritage Directorate of Parks Canada which read as follows:

“I’m delighted to inform you that the HSMBC’s Inscriptions Committee has approved the plaque text for the Early Science in Canada’s North and the Hudson’s Bay Company (1768-ca. 1810) (see attached). Please share the attached text with the stakeholders, so that there are no surprises on the day of the installation. However, please do not invite feedback or comments on the text, since this is the final Board-approved inscription and we are not seeking to engage in further vetting. When you’re ready, Kim Cotroneo (cc’d) will work with you to get the plaque cast and, Michaela Campbell or Darlene Doucet, from the Corporate Communications team (cc’d), will provide you with products for the plaque unveiling.”

The text approved by the Monuments Board read as follows:

In 1768, the Hudson’s Bay Company (HBC) arranged for two British astronomers to travel to Prince of Wales Fort to observe the transit of Venus (1769) and make calculations of astronomical distances. This work heralded over forty years of HBC cooperation with the Royal Society of London and others in the Canadian North. Indigenous collaborators shared their substantial knowledge of the land, plants, and animals throughout the enterprise. The Company played a foundational role in sponsoring scientific knowledge of the North, furthering the fields of astronomy, meteorology, cartography, and natural history.

While the sum and substance of the text does not describe the events in any detail it is still an acknowledgement in part of what happened then.