PHOTOS OF AN UNUSUAL SKY PHENOMENON FROM SVALBARD (SPITZBERGEN)

Below you will be able to see some interesting images which I shot in Longyearbyen, Svalbard *March 21, 2015*. Due to low temperatures I had to go in and out of our hotel just to stay somewhat warm.  At some point I happened to look up and noticed a peculiar object directly overhead.  From the site location  78.2200° N, 15.6500° E, I shot 15 second exposures at ISO1600 to record aurora with a 14mm lens and Nikon D3100 camera in .JPG format. The first time I saw this diffuse object it was during a break from the aurora activity at 1.23am local time March 21.  This would be 00.23 UT. During the interval of 0023UT to 01.08UT I took 17 shots with the same exposure times.

A natural explanation is offered for this. See the end of this web page. However, readers are asked to submit any specific references that might assist to finalize the origin using the approximate camera times and orientation relative to stars in Ursa Major for guidance.  The relative position in the sky was roughly overhead.

Frame 1 taken at 00.23 UT with Ursa Major in the field of view. Notice the satellite track in this and the next exposure. 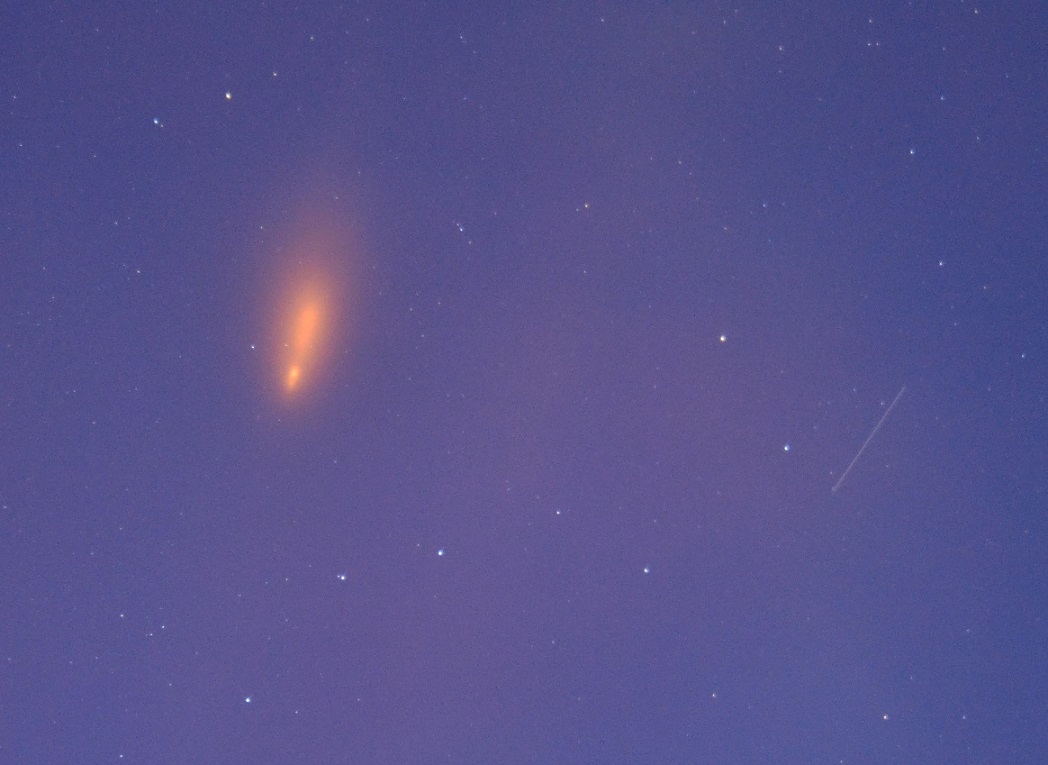 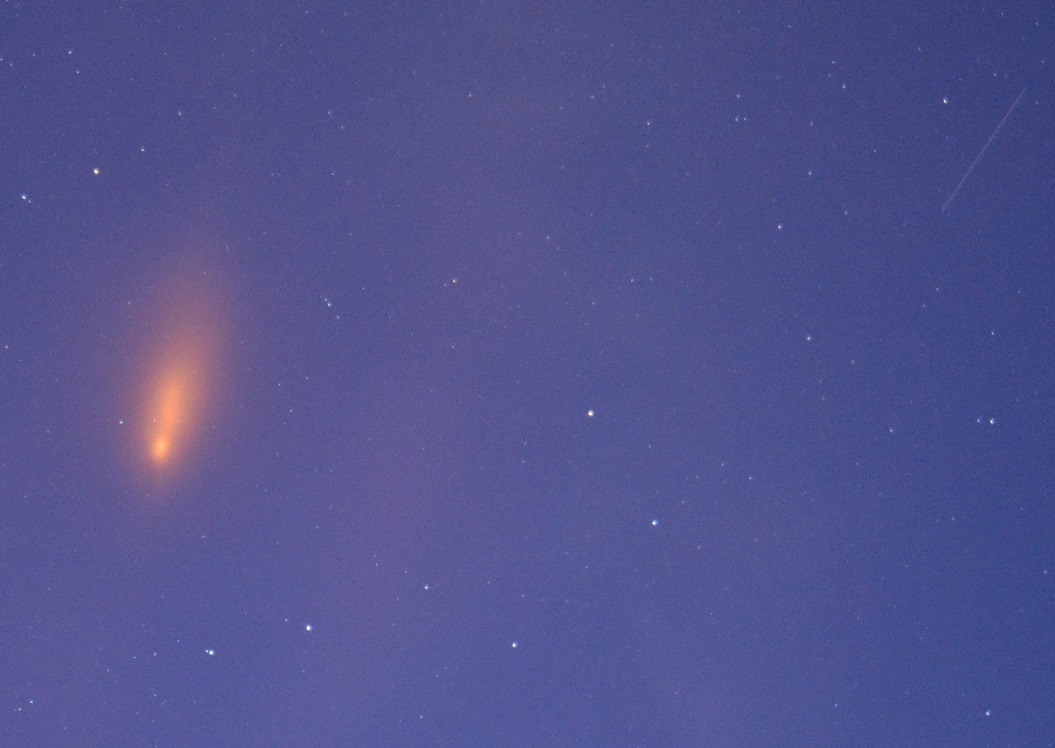 Frame 3 taken at 00.25UT.  The faint colored glows may or may not be connected to this apparition. 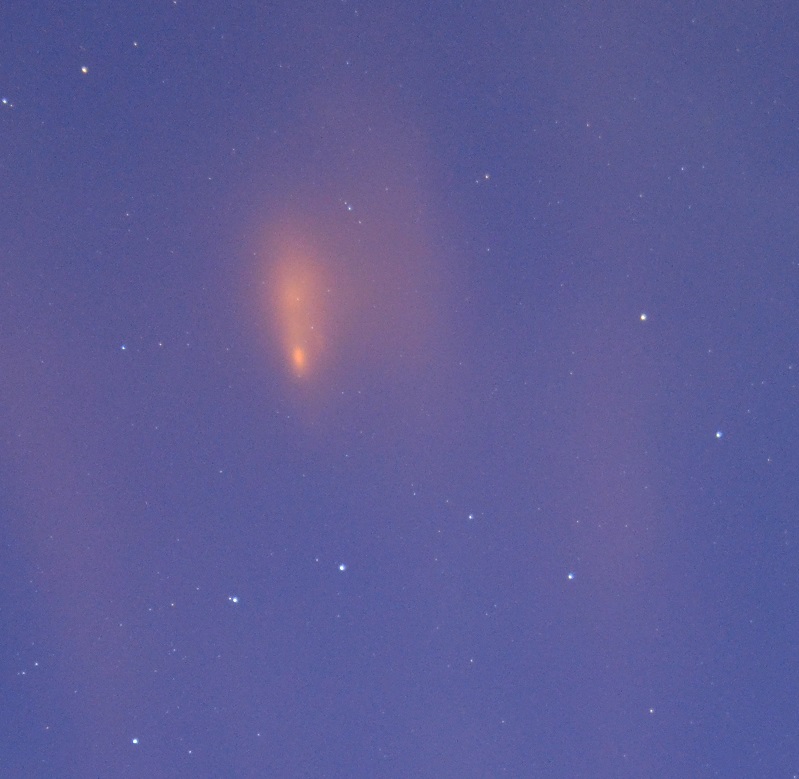 Frame 4 taken at 00.26UT. Notice the change in alignment relative to the Big Dipper stars. 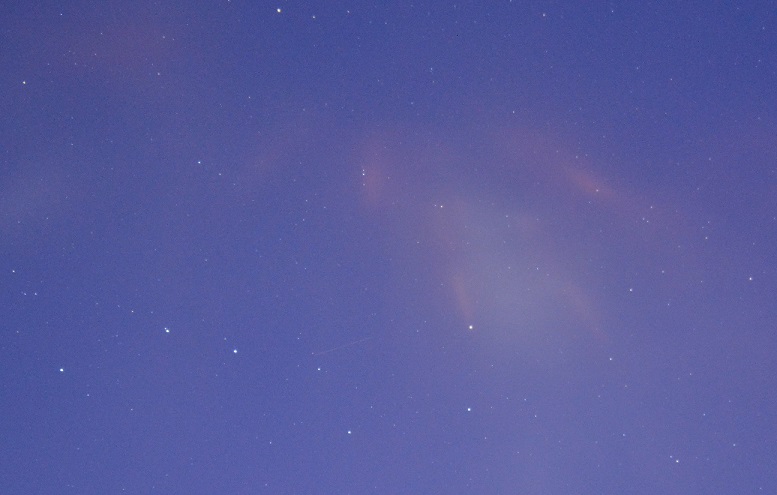 Frame 5 taken at 00.32 UT which appears to show the cloud has dissipated with various angular orientations. Also the faint unrelated satellite trail.  After this I assumed everything was at an end. But some minutes later my attention was again drawn to the same part of the sky as I began looking for aurora.  I then saw what appeared to be a 2nd occurrence of this phenomenon as in the images below. 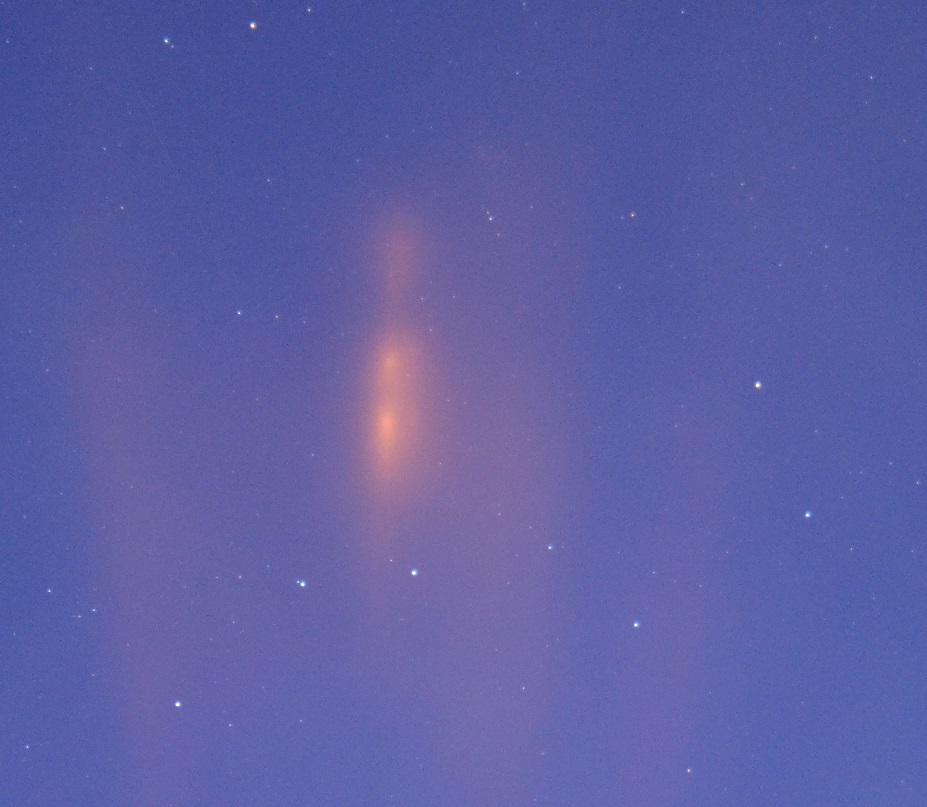 Frame 6 taken at 00.46UT with a different alignment relative to the Big Dipper stars compared with the first event. Notice the rough alignment with some of the faint wisps. 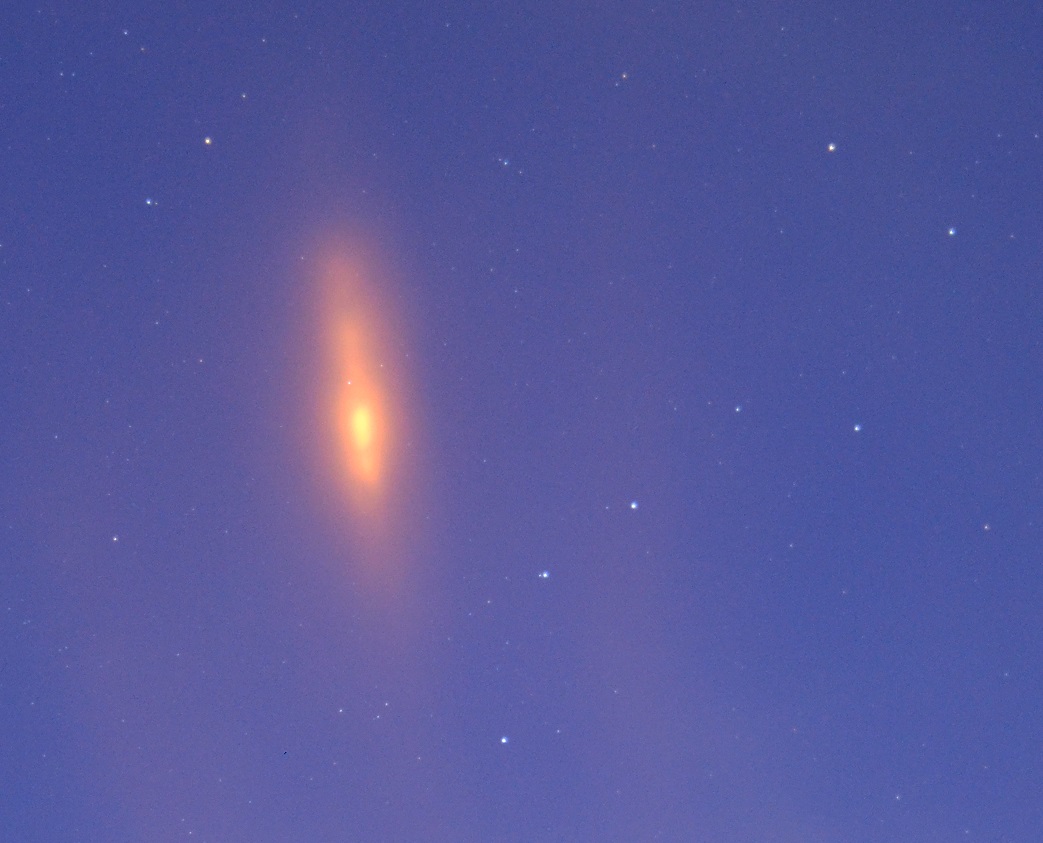 Frame 7 taken at 00.47 UT where the alignment changes again. 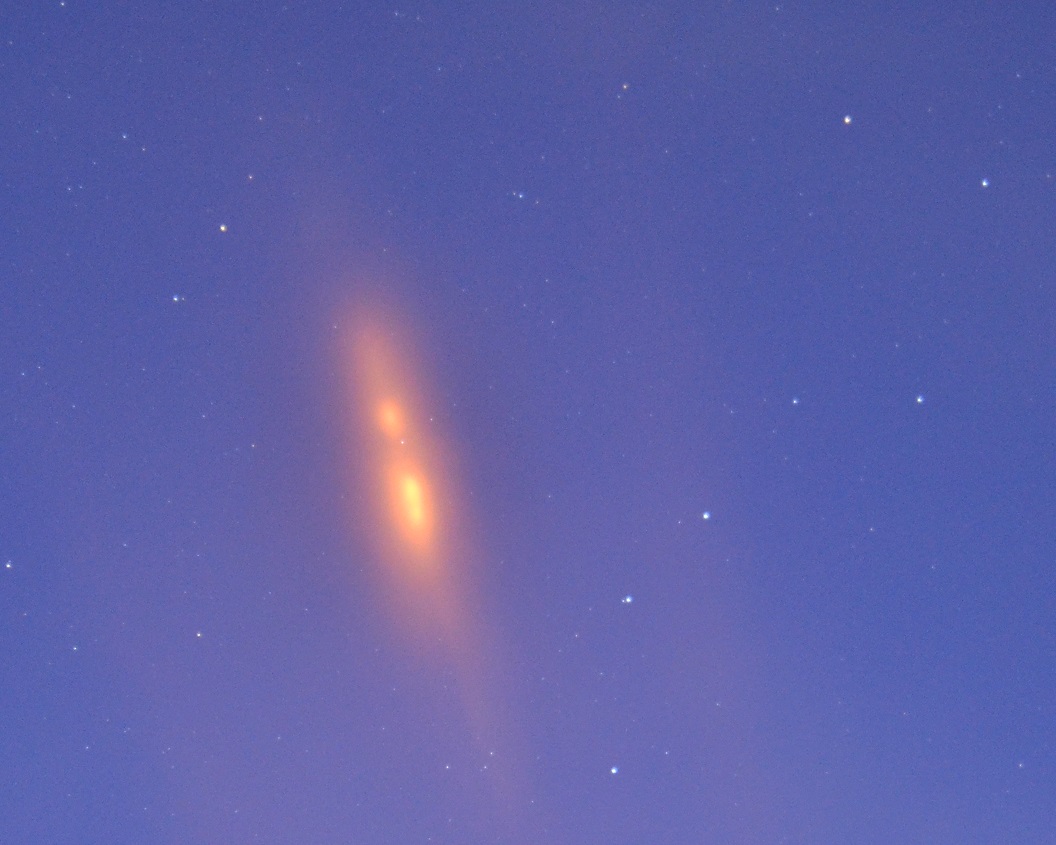 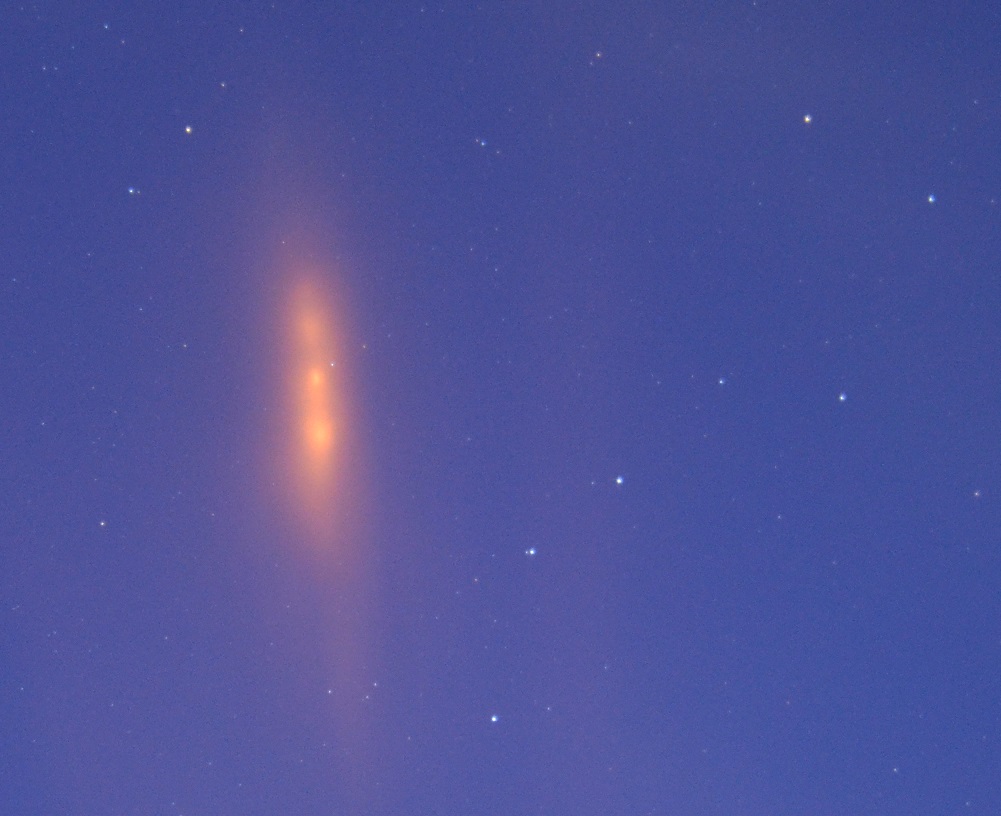 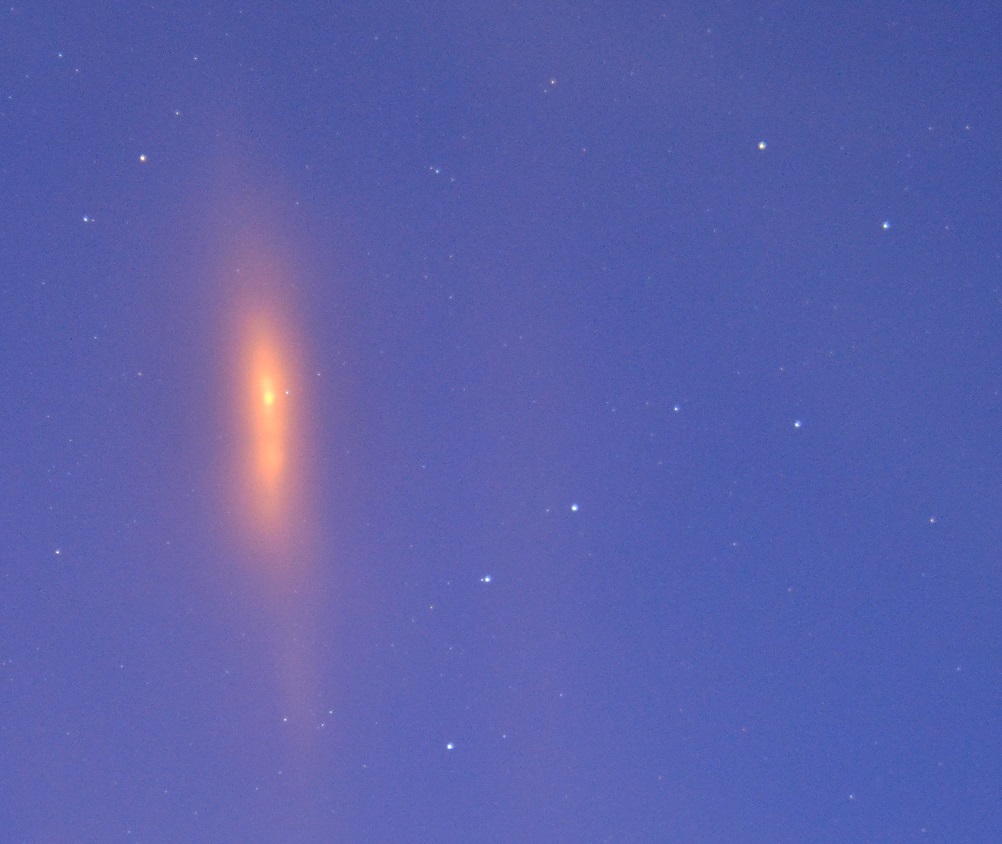 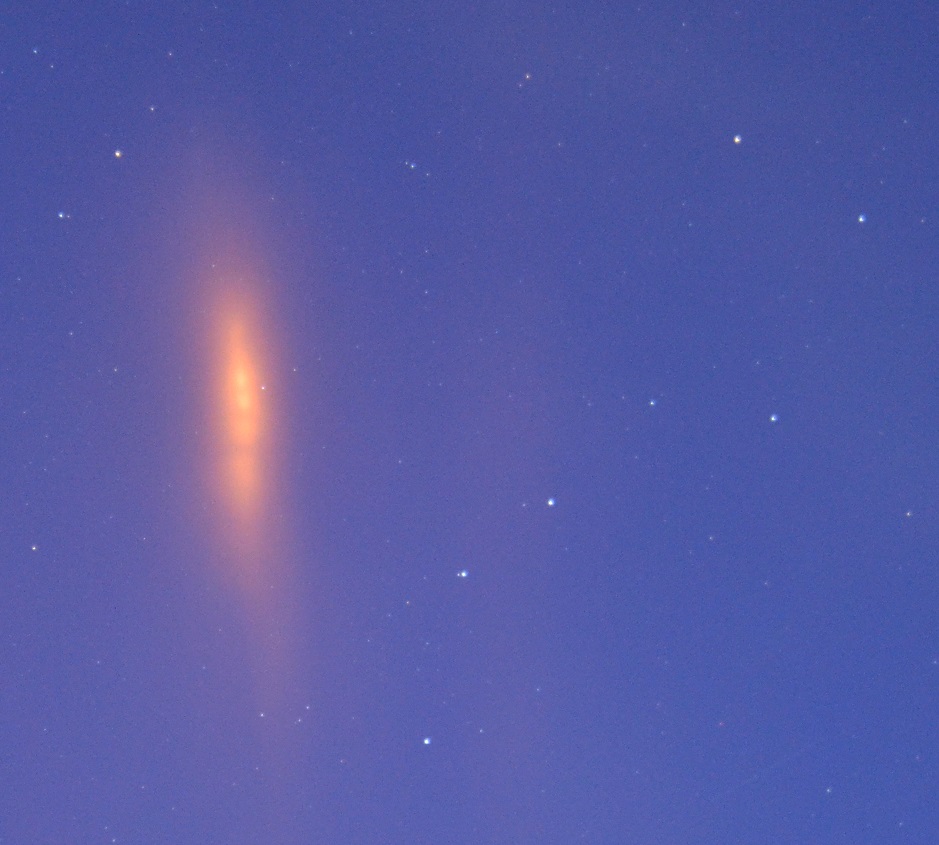 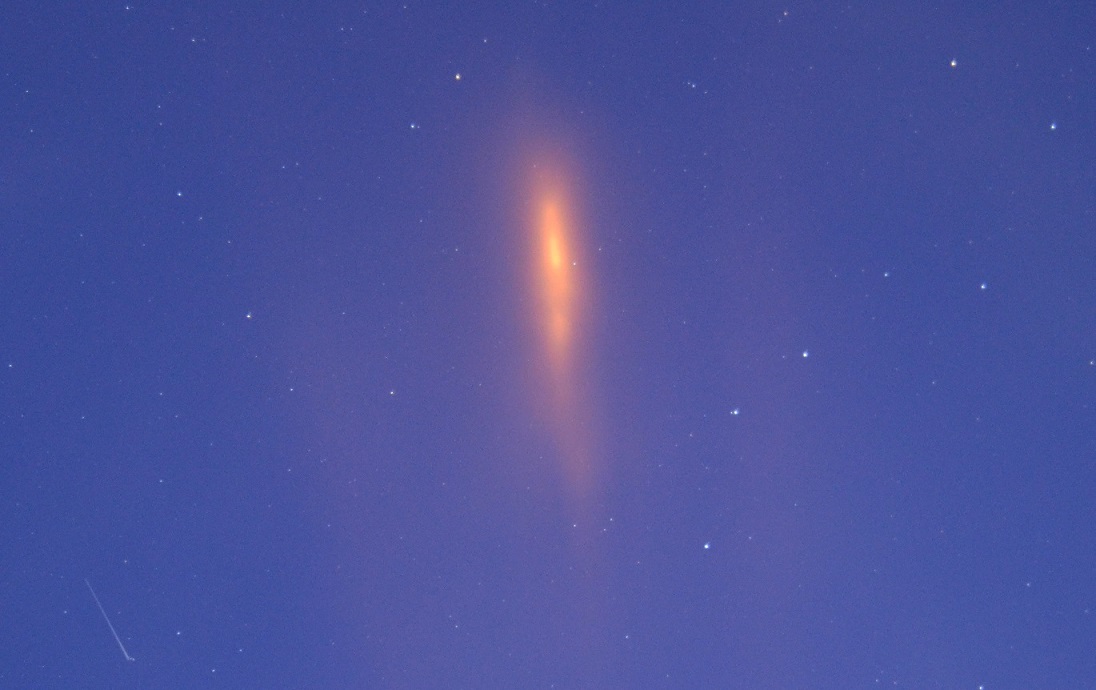 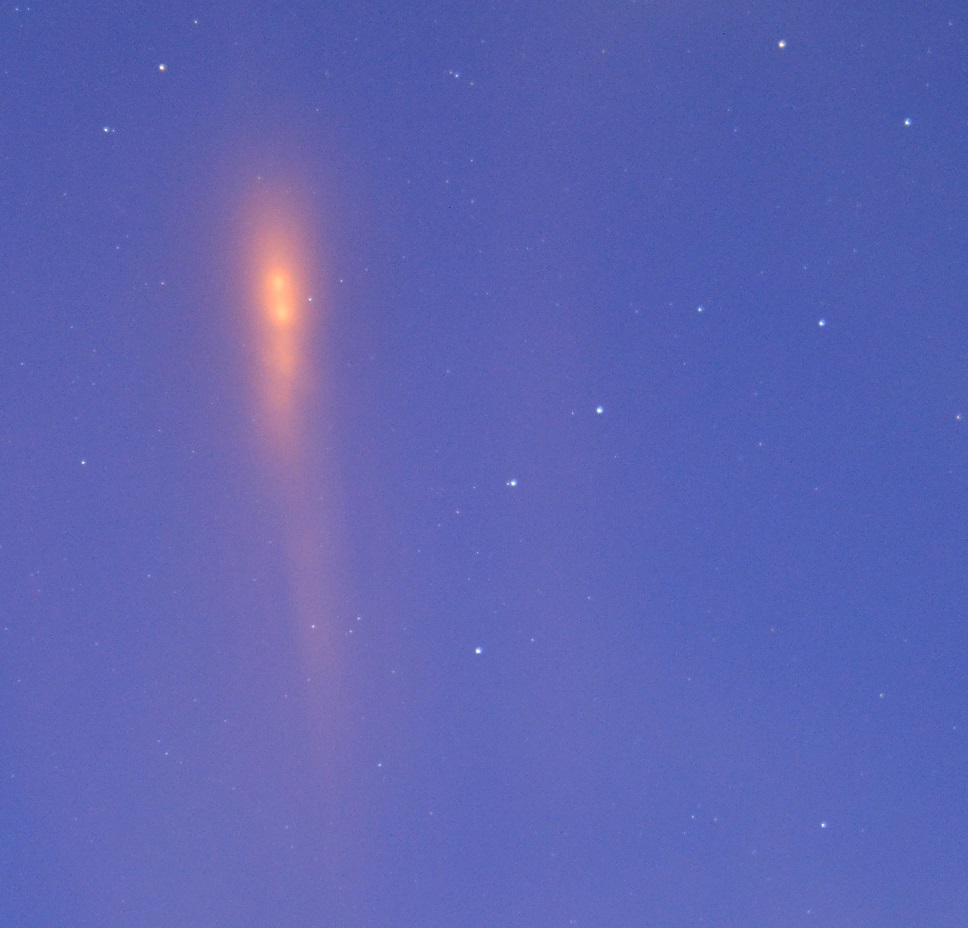 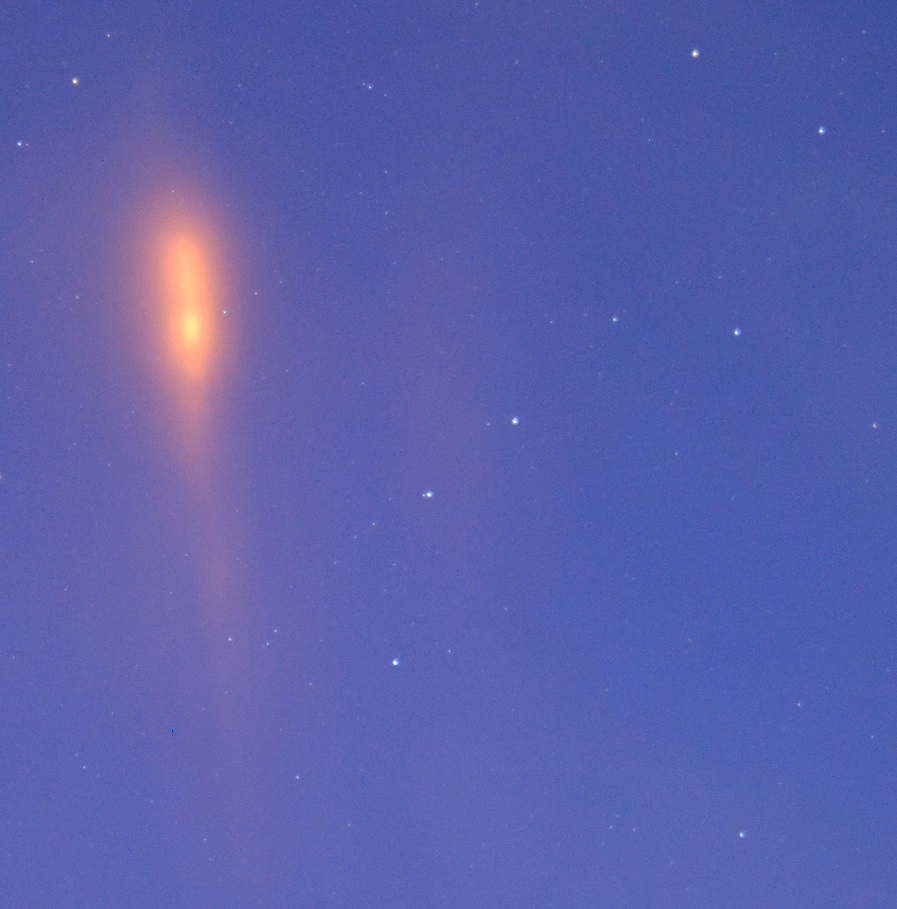 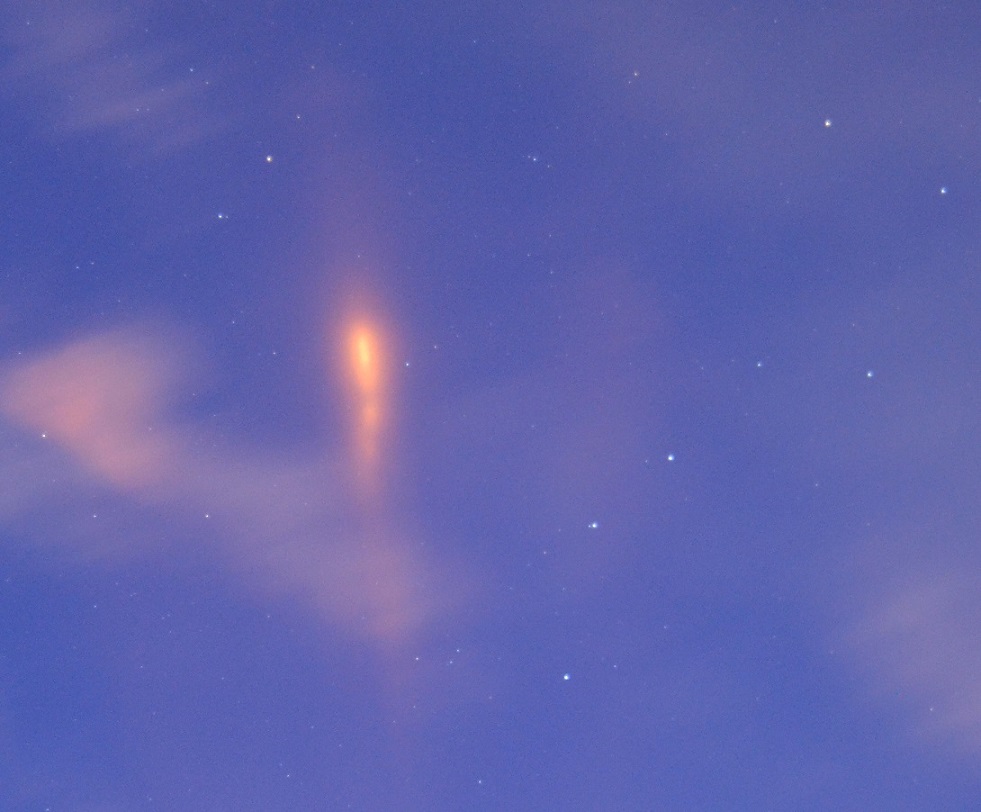 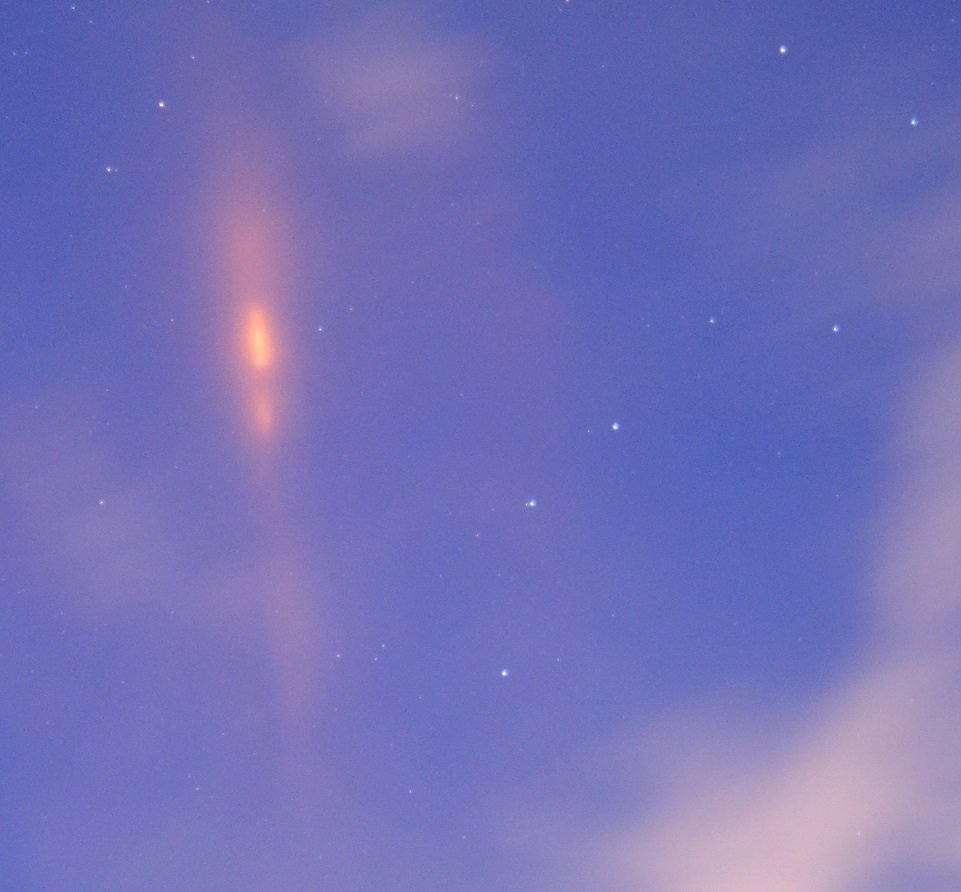 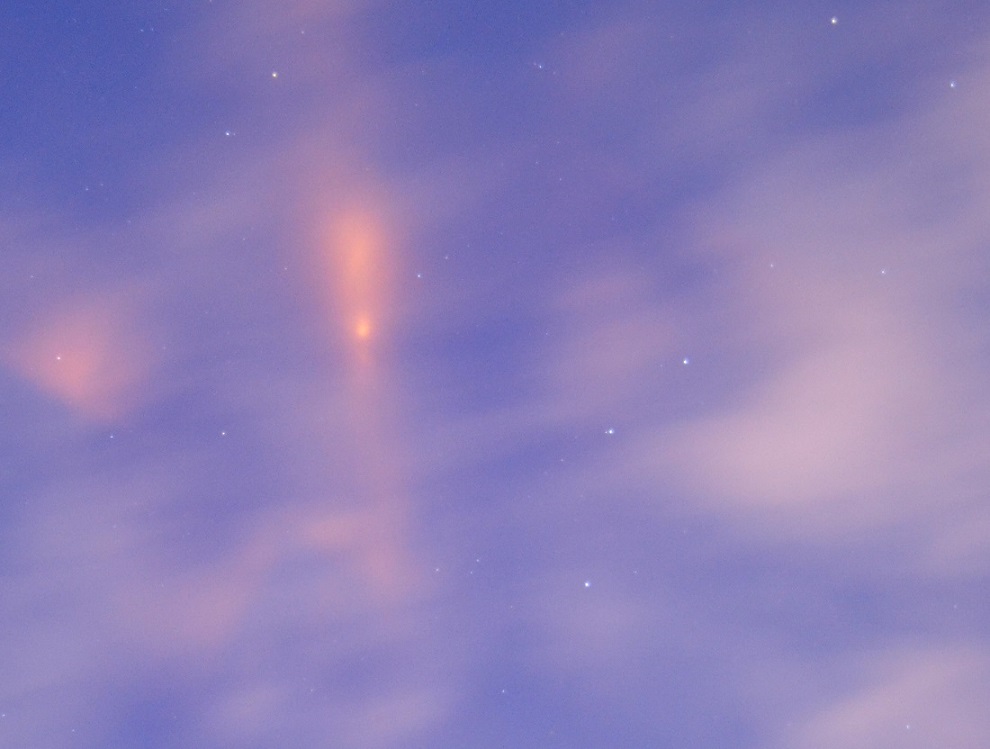 Frame 17 taken at 01.08UT as clouds envelop the area and did not clear.

Ted Molczan suggests that this might be a light pillar of some sort.  There is evidence to suggest this. During that period in another part of the sky I took the following wide angle picture. 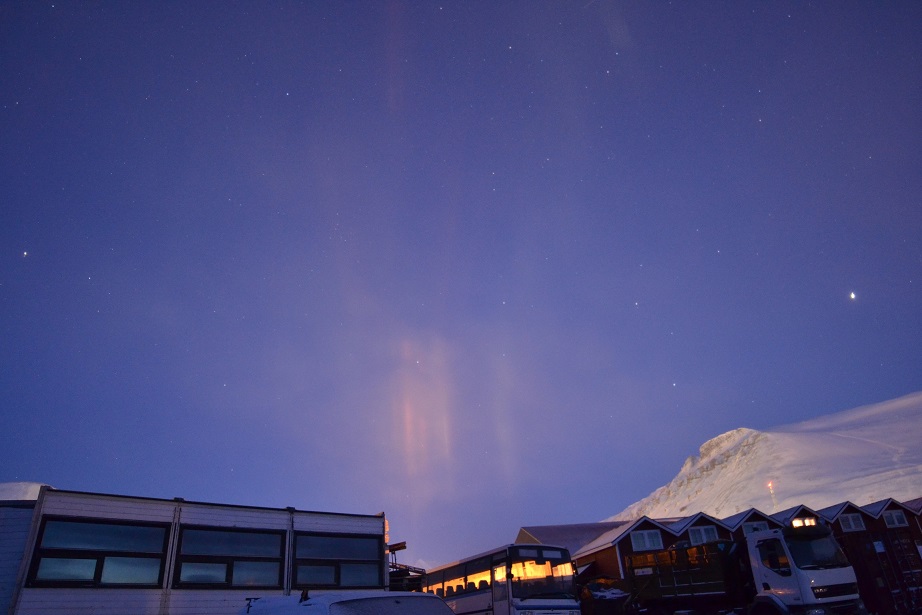 This shot was taken during the prior time period as I first attempted aurora photography successfully between 2315 and 2327. I noticed these vertically oriented pillars that appeared and remained in place for a long period of time.  Their locations were due south while the phenomenon above was confined to a smaller area overhead.  Some ground observers assumed these were aurora but although natural phenomena, they never moved. Therefore the suggestion that the image above showing vertical light pillars seems logical.

In the absence of any other explanation readers should consult: http://www.caelestia.be/article01d.html in which the following may be a similar image.  The text below is from the aforementioned web site. 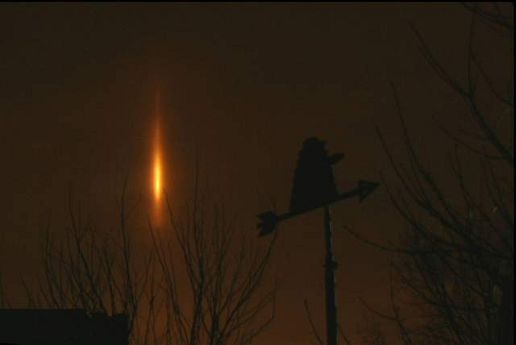 Usually, reflections from ground-based lights in high clouds appear as vertically oriented pillars of light. An 1887 article from the American Meteorological Journal describes the phenomenon, then referred to as “gas comets”, as “bright streaks or bars of light (…), measuring on an average one-quarter of a degree in width and from 5 to 15 degrees in length”

Light pillars can be visible for minutes, even hours, disappearing and reappearing just like a light that is switched on and off. The length of the streaks depends not only on the angle under which the pillar is seen, and which is determined by the altitude of the reflecting layer and the distance between the observer and the light source, but also on the thickness of the ice-crystal cloud.

Close-up images of light pillars sometimes show peculiar features. These can be due to the distribution of the ice crystals in the cloud or to the nature of the light source that causes the pillar. Clouds with different concentrations of ice crystals at different altitudes for example will give the reflection the appearance of a luminous string with brighter areas where ice-crystal concentrations are high. Because clouds move and change shape, the aspect of the reflections will change accordingly. Four examples of light pillars showing peculiarities. From left to right: segmented pillar caused by a gas flame reflecting off separated ice-crystal layers positioned one on top of the other; pillar with multiple nuclei caused by the reflection of a gas flame in a thick cloud with different concentrations of ice crystals at different altitudes; rope pillar, also caused by a gas flame, but here the reason for its specific shape is unclear; combined pillar presumably caused by multiple spotlights placed close together.