There are some spacecraft for which no formally published orbital elements exist. Instead, amateur satellite watchers have acquired and tracked these objects and publish unofficial information. The NOSS satellite groups are part of traveling trios that are associated with an apparent surveillance system. These objects can often be observed even with the naked eye moving together as part of a flying triangle formation. The following images I took from Clear Lake City, Texas USA using my low light level night vision system. All three objects were about 6th magnitude at the time of the pass. The individual spacecraft are labeled A, B, and C as they move between images. My first observation of a ‘flying triangle’ occurred on June 24, 1988. 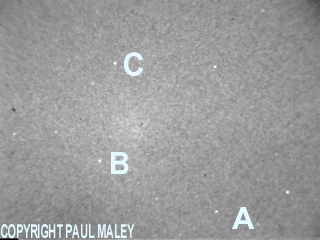 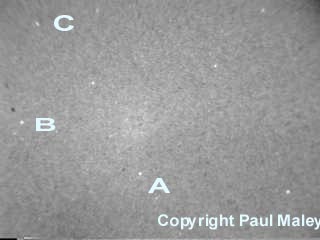 The three satellites labeled A, B, C are first seen in the top image. They are moving from the lower right to upper left and maintain their relative positions with respect to one another in these frames. However, as they move through the sky, the geometrical angle between them is seen to change. The NOSS satellite clusters have been often reported by amateur satellite observers or amateur astronomers who have encountered the flying triangles completely by accident. While coordinating a night time Perseid meteor observing session in Turkey in 1999, I pointed out one such trio to our solar eclipse team as the NOSS group flew over southern Turkey and were clearly visible to the unaided eye at magnitude +3.

Here is an old image taken of Cosmos 1569, also known as satellite number 15818. It was a Russian reconaissance satellite which separated into (at least ) two pieces after approximately two weeks in orbit before one piece apparently returned safely to earth while the other burned up. On occasions it was possible to view this type of satellite from my site in Houston. Another ‘two week recon satellite’ was 20657 that I observed on July 3, 1990 at 0233 UT. This time three pieces were spotted. 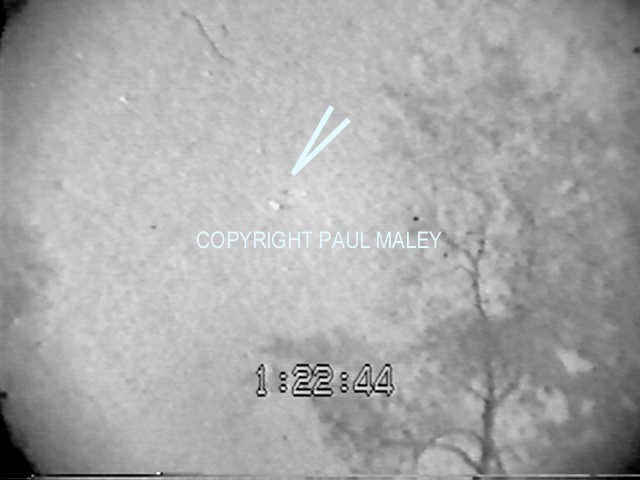 For 15818, you can see the two pieces closely spaced shortly after their separation. This is one of the earlier images captured on VHS video tape. The bright background is caused by a relatively wide angle lens which allowed sky brightness to interfere with the contrast. Both of these pieces were visible to the unaided eye. This image was taken on June 27, 1985 at 0332 UT, range 1131km, magnitude of both objects was between +4 to +5 with flash period of 3 seconds. 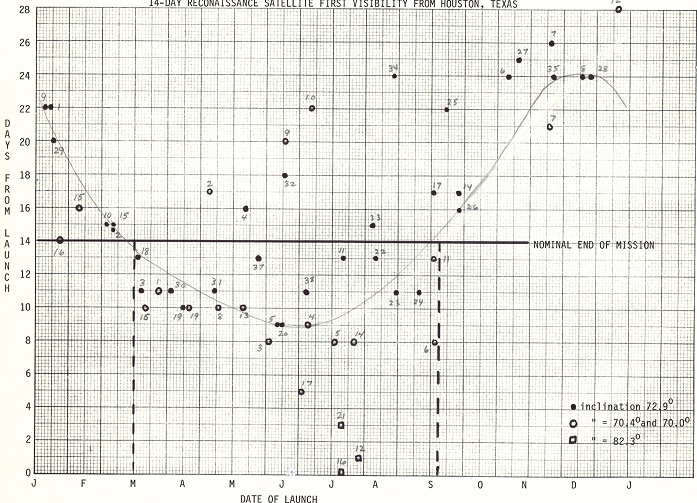 With regularity it was possible to view more than 13 missions of the two week recon type from my site in Houston, Texas.  The above graphic illustrates how those visibilities occurred in relation to month of launch and nominal end of mission.  In all cases two objects were seen (spacecraft and capsule).

This  was a Soviet spy satellite that failed to achieve its correct orbit. Normally, such satellites burn up harmlessly in the Earth’s atmosphere upon re-entry. However, Kosmos 1402 was nuclear powered. A similar satellite, Kosmos 954, crashed in Canada’s Northwest Territories in 1978.

Kosmos 1402 was launched on August 30, 1982. Normally, such satellites separate from their reactor core upon completion of the mission. The core is then boosted into a “parking orbit”. However, the core of 1402 did not boost itself into parking orbit. Kosmos 1402 reentered the Earth’s atmosphere on January 23, 1983, hundreds of miles south of the island of Diego Garcia in the Indian Ocean, leaving no known debris. The core re-entered on February 7, 1983, landing in the South Atlantic Ocean.  I photographed this satellite on January 11, 1983 at 1209GMT from Houston, Texas using a 50mm f/1.4 Canon lens on ASA400 film as it passed at a local elevation of 86 deg above azimuth 60 and range of 154 statute miles.  The brightest star in the image below is Arcturus. 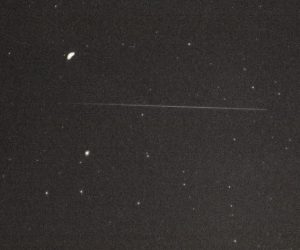