A PORTABLE TELESCOPE THAT CAN BE CARRIED ON A PLANE

Since one has to travel to occultations rather than wait for them to arrive at the front door, it is important to have a system that can travel well. Many of my flights take place on small aircraft such as Continental Airlines Embraer regional jets which have little room underneath the seats as well as the overhead compartment. A design was needed that would work within the current aircraft limitations both for weight, size and number of allowable pieces as well as be accommodating to airport security.

In 2005 I requested Kurt Maurer of League City, Texas to design a modification to my portable occultation gear so that it would be more portable and provide greater ease in setup and stability. The design described below for the mount and finder is Kurt’s creation. I use a Meade 2045D telescope which is no longer being manufactured. This is a 4-inch aperture scope that, when coupled with a video camera and image intensifier, is capable of recording asteorid occultations of 12th magnitude stars depending on the sky conditions.

Kurt used wood in order to create a lightweight folded base that could be set up and aligned to most common latitudes. In addition he modified a right angle 9×60 AstroSystems finder scope to replace the horrible standard straight through view finder that came with my Meade 2045D. Then, the steel legs were replaced with hollow aluminum legs that were lighter and stronger. The design is illustrated in detail below.

In order to complete the setup, occultations are actually recorded using a camcorder, image instensifer and camera as described elsewhere on this site. The biggest weak point continues to be batteries. I use Supercircuits 12V rechargeable batteries but unfortunately there is no way to tell when the battery is discharged. Hence I have to carry more than one. The Meade 2045D is also run from this battery and uses a special connector that is different from that which powers the video camera (also needs a 12V source). These batteries are rather heavy and are often inspected by TSA. 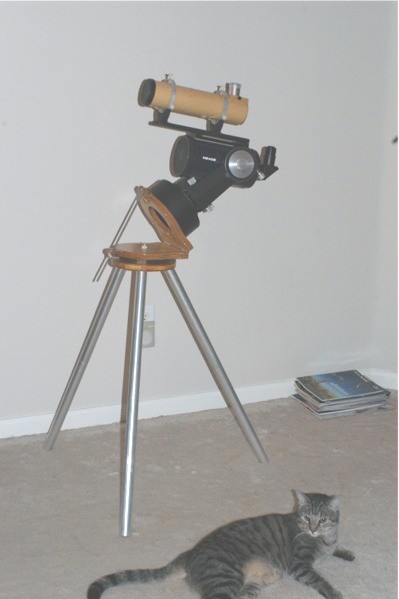 This is an overview showing the telescope fully set up. At the top is the 9×60 finder which sits slightly forward on top of the Meade scope. Kurt designed the finder to be extremely light weight so that when the video camera and image intesnfier is attached where the telescope eyepiece is shown, there is no moment arm generated.

The finder telescope is a crucial component. Not only does it allow more rapid polar alignment, but it permits better flexibility in finding the occultation target star. It fits inside this bracket which is hinged so that it can fold flat for packing. Note the plastic thumb screws to minimize damage to the finder tube when boresighting the finder to the scope. 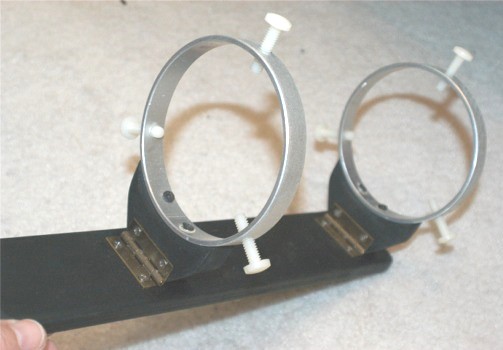 In the next image, note the four Phillips head screws that protrude from the finder support structure. These are permanently set like that so the finder base can fit comfortably in a dovetail mount that is permanently fixed to the top of the Meade 2045D.

A top view of the dovetail mount. The four white areas are slots that accommodate the four screws described above. 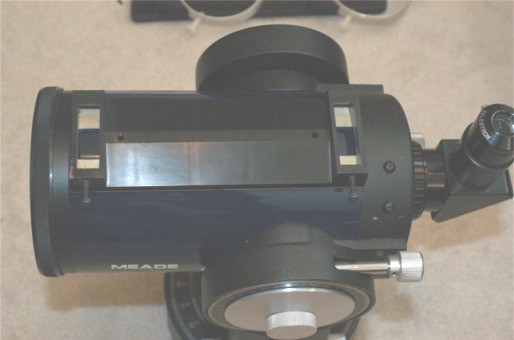 A side view shows the screws as they begin to fit in the gapped areas. Note that on the side of the dovetail mount are two set screws that can be turned by hand to secure the finder support structure in place. The two black set screws come in contact with two of the four Phillips head screws on the finder base. 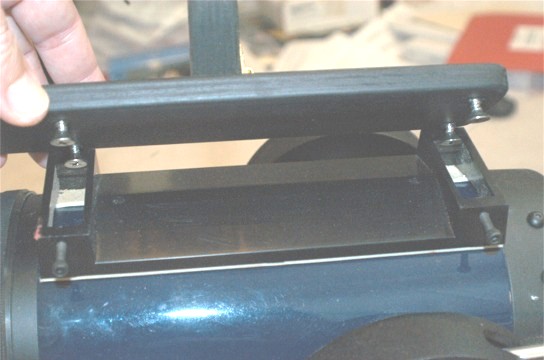 The mounting base is especially critical. A threaded rod provides the elevation adjustment for polar alignment. A plastic wing screw located where the rod meets the flat portion of the base in the photo below (partially hidden) serves for easy adjustment. 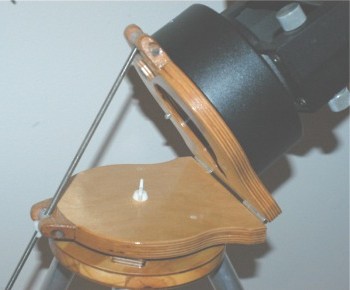 Another wing screw holds the base to the mounting plate. Note that in the tilted portion of the wood base that is attached to the telescope, there are three holes. The hole on the left shows a stud protruding through the base. This stud is permanently sticking out from the bottom of the telescope and simply slips into the open slot in the base so that a wood tumb screw (top) can be turned in place to hold the scope onto the mounting surface. The third hole is not used but can accommodate a second thumb screw to more securely hold the scope on the mount surface if ever needed.

In the image below you also see the dark surface of the telescope base. The hole in the center is unused. A smaller hole just below center is for the 12V battery. Just below that is the switch that permits the scope to track in either the northern or southern hemipshere. 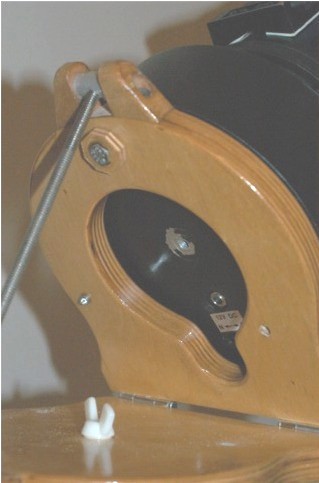 Since the 12V dc power connector on the scope is uniquely different from that of the camera, two power connectors are branched off from the battery so as to allow both devices to run from the same battery. 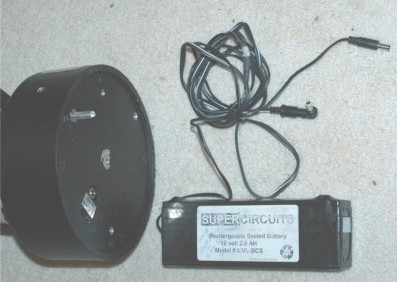 The mounting bracket is hinged (left side) and folds flat for packing. 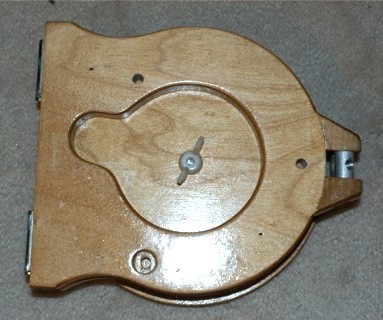 The basic components are more clearly visualized below in their ‘ready to travel’ configuration. 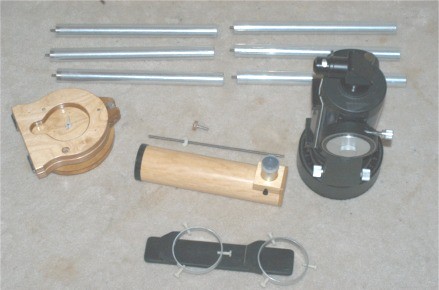 There are three tripod legs each of which has two components. All legs have screw threads that allow for attachment with each other and also with the base of the mounting plate. 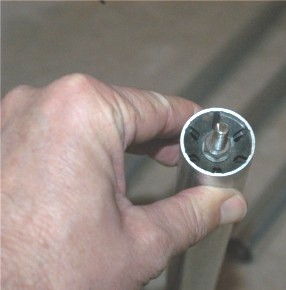 Sometimes I am allowed to carry on the legs by themselves but they may fit in a small carry on bag (though it can be checked); the legs are surrounded by bubble wrap. 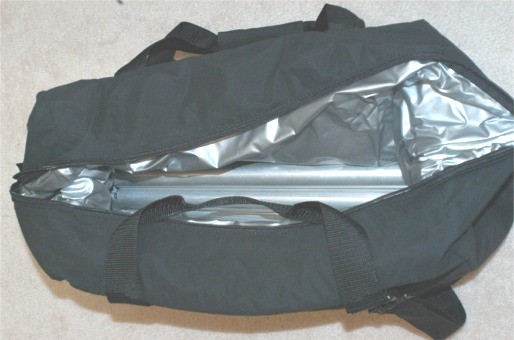 The backpack is now fully packed with 1) telescope, 2) finder, 3) mounting bracket, 4) eyepiece, 5) threaded rod, 6) thumb screw. Its weight then is about 16 pounds. 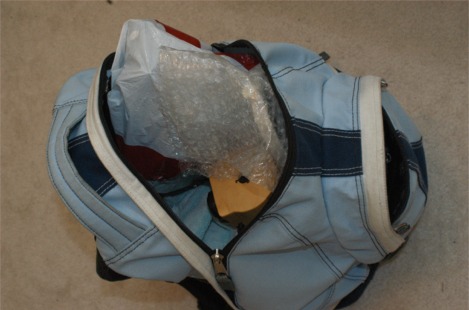 The rest of the occultation hardware is stored in a briefcase, also an airplane carry-on. On the left is a shorwave radio, on the right the camcorder with various batteries in between. In foreground the image intensifier, f/6.3 corrector and camera are connected as one unit and wrapped in bubble wrap. A flashlight and assorted cables and batteries are also stored here. The finder support structure can fit either in the briefcase or in the backpack. 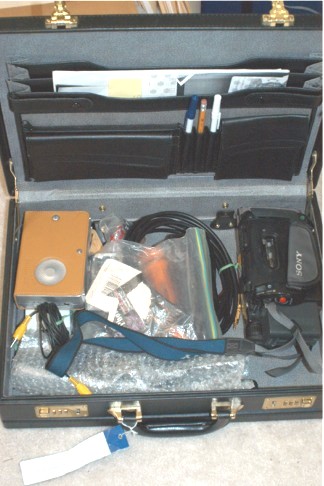 All three bags are shown below. The backpack is the most challenging and it sometimes will stick out when placed underneath an airline seat. If I can find an overhead compartment, I will insert it there but the briefcase is especially useful for small regional jet overhead compartments. It is often possible to carry all three onboard; however, depending on the security situation, I have been known to check the tripod leg bag. 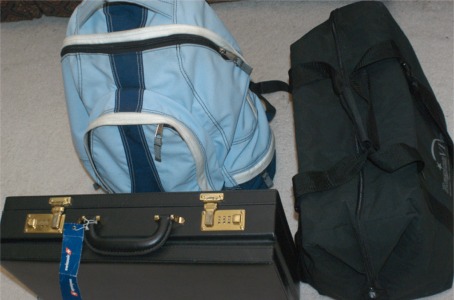