ECLIPSES OF STARS BY THE MOON 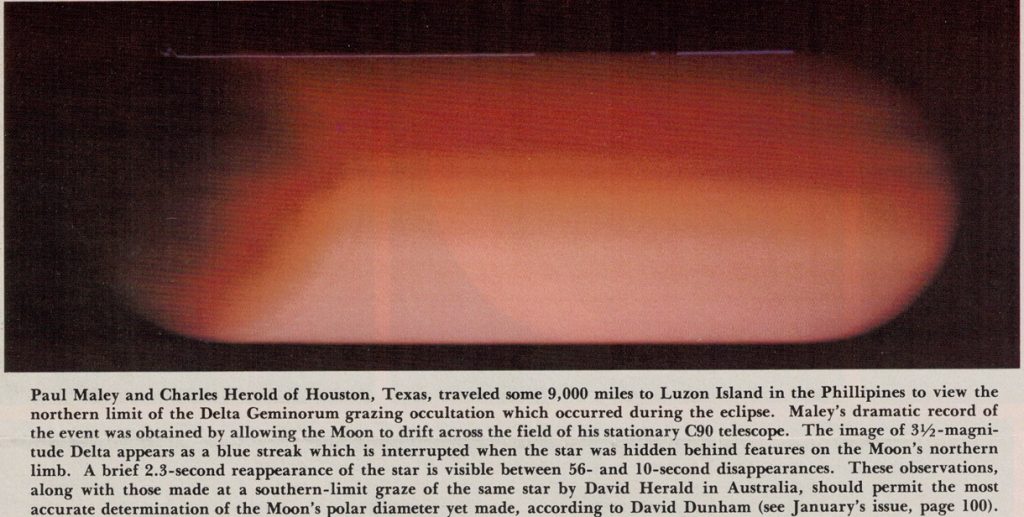 As the moon moves about the earth, it covers up stars along the way. We can take full advantage of this to record their disappearances and reappearances. There are two types of occultations of stars by the moon: 1) direct occultations where the moon completely occults the star for many minutes, 2) grazing occultations where a star undergoes a series of disappearances caused by lunar mountains at either the south or north lunar pole. The latter is the most interesting and offers the opportunity to: a) help determine heights of lunar features and depths of lunar valleys and, b) determine if the star is a single star or may have close companions, c) improve information on the orbit of the moon, d) improve positional information on the star. Linguistically a graze has nothing to do with cows or pastures. It simply describes the angle of incidence made by one body as it hides another. Grazing occultations are a wonderful way to initiate young people in developing the skills for night time science. It can start off in the classroom on a cloudy night. The photo below is an example of graze training in Houston, Texas as depicted in this photograph in 1977 at the Lunar Science Institute showing the author and Dick Rogan leading a training session. 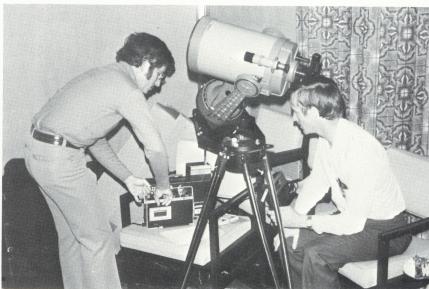 Groups such as scouts or science classes in astronomy can select a graze as a project. Successful execuation of a graze program can help young people learn:

It is important to stress that though we use the term ‘young people’, occultation projects are gender, race and age independent. Occultations can be an all inclusive effort. The most successful graze that I have organized was documented in SKY AND TELESCOPE magazine April 1973, p.257 and involved 86 persons from the Johnson Space Center Astronomical Society, Houston Astronomical Society, Rice University and the Burke Baker Planetarium. A total of 180 timings were made by the group set up at 37 locations on the campus of Rice University in Houston, Texs on the evening of February 10, 1973. This expedition and two others in Austin, Texas and Florida together contributed a sum of 310 timings making it the most productive graze in history. This record still stands today. The photo is from SKY AND TELESCOPE. 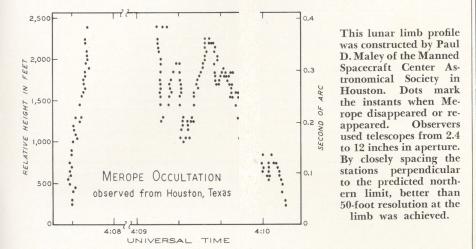 If one should have access to a larger scope such as a Celestron 14 shown here in the next image, it is possible to hook up a video camera, and separate monitor to record the details of the disappearance and reappearance of stars as they are occulted by the moon. The following image shows the author with Walt Frerk at a graze of a 7th magnitude star near Houston. 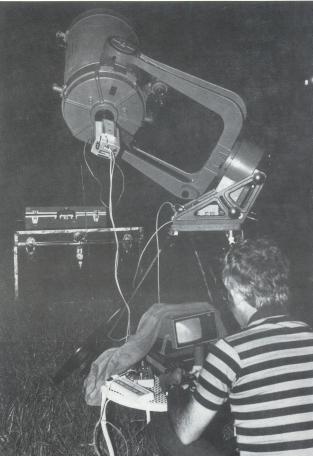 Information from simultaneous observations of the same star being occulted from opposing lunar poles can yield information on the polar diameter of the moon. Our first attempt to observe such an occultation was in January, 1982 when Chuck Herold and I travelled from Houston, Texas to Dagupan City, Philippines to observe a grazing occultation during a total lunar eclipse. The following picture shows us observing the end of the lunar eclipse from in front of a small hotel. 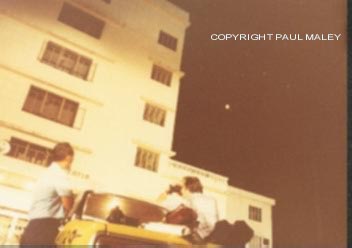 During this eclipse, I took the first and only photo (up to this time) showing an occultation sequence in progress during the total lunar eclipse. It was shot through a Celestron 90 which was mounted only on a camera tripod. The timed exposure shows both the moon and star drifting through the field of view from right to left. The star is the linear streak whose light is broken twice. The first time is when it disappears behind a lunar peak, then reappears a few seconds later for a very short time. Then, it disappears again for a much longer time finally reemerging at the left. 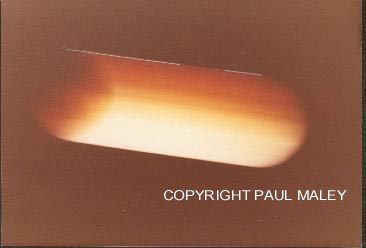 My second attempt at timing an occultation during a total lunar eclipse came on May 4, 1985 when I tried to see the grazing occultation of Alpha Libra from Sudan during another lunar eclipse from the northern limit along with David Dunham, Gary Nealis and others; a team in South Africa observed from the southern limit. We had to endure a fierce nighttime sandstorm which cleared just before totality began. My third attempt came eight years later. Here is an image sequence I shot taken from north of La Paz in Baja California Sur, Mexico in connection with the grazing occultation of the star ZC 646 by the south pole of the moon during a total lunar eclipse on 11/29/93 at 6:30UT. This star is magnitude 6.1 and was easily recorded using a video system through a Celestron 8 telescope. In the first image the star is the small dot to the left of the darkened limb of the moon. It is well away from the lunar limb. The moon is moving from west to east in order to intercept the star. 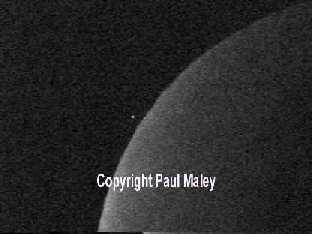 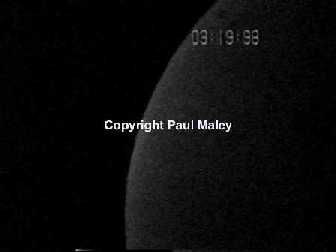 This is the result of the first lunar mountain encounter, when the star now disappears. Note the elapsed time counter in the frame. 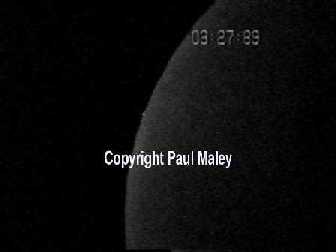 Then the star reappears. There were several additional timings made. This interesting sequence is part of a composite series of video observations I made at a site in Mexico along with Chuck Herold and Richard Nugent who manned other stations. The site position was initially determined using one GPS receiver in 1993 but the information was not accurate enough. I had to resurvey it again in May 2000 to obtain a more precise geodetic position. When combined with other observations made in Canada of the same stellar occultation, it is hoped an improved lunar polar diameter may be determined.

Occultations involve other bodies as well. Here are two frames of video I shot at the Mexico City airport depicting Venus as it is emerging after being occulted by the moon some years ago. In the first photo, Venus is partially emerged from behind the dark limb of the moon. 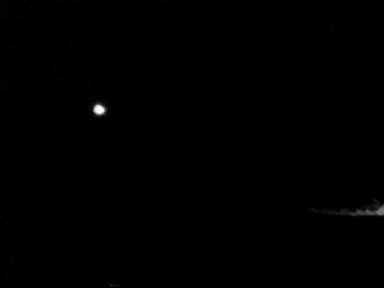 In the next frame, Venus is fully emerged. 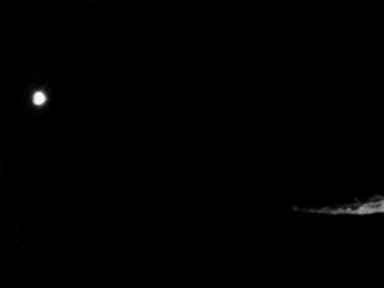 Note the edge of the sunlit moon just to the lower right.   We presented the above examples of occultation phenomena in the hopes that readers of this page will be stimulated to enter this interesting field that offers such potential for contribution and discovery.