MARKER COMMEMORATING THE DISCOVERER OF PHOBOS AND DEIMOS: 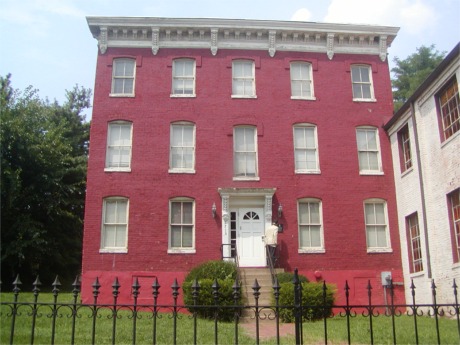 The former home of Asaph Hall in Georgetown.

During my research in Washington DC, I found that the current Alexander Memorial Baptist Church Fellowship Hall at 2715 N St. NW is the former home of astronomer Asaph Hall, the person who discovered the two moon of Mars. The primary church structure is to its right. Hall and his family lived here from 1867 forward and also during the time of his assisting in the defense of the capitol from invading Confederate forces, as well as during the discovery of a white spot on Saturn, his discovery of Phobos and Deimos (Martian satellites), and his expeditions to San Antonio, Texas in 1882 and Vladivostok, Russia in 1874 to observe the transits of Venus. 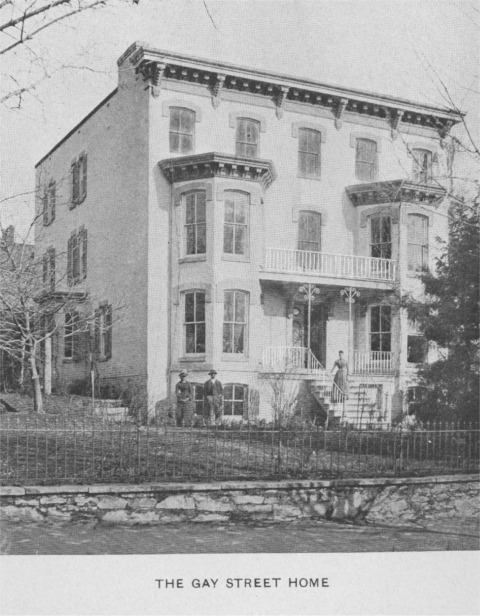 The Hall house as it was in 1900. Appeared in the “An Astronomer’s Wife: the Biography of Angeline Hall” by Angelo Hall published in 1908.

On August 11 and 17, 1877 Asaph Hall, an astronomer at the United States Naval Observatory, discovered the only two known natural satellites in orbit around Mars. Now, 128 years later in 2005, on August 14, I created and installed a plaque (on behalf of the JSC Astronomical Society) at the house where Hall lived during that historic period.  Early in 2004, I accidentally found the true location of the house in DC and after working with the Church was able to reach agreement that it would be acceptable to affix a plaque to their building commemorating Hall’s residence there. In addition, I was able to develop a plan that worked around the complexity that might be otherwise involved if a formalized historic marker was created on a building under the governance of the Old Georgetown Board. This board was created in 1950 to approve all activities related to historic semi-public and private buildings in the Georgetown historic district. After some months of work, a plan was in place to inaugurate the plaque with a formalized ceremony in August 2005.

Hall’s home today is the fellowship hall of the church and is essentially the same building as it was in 1877 except that the three floors have been renovated. The basement is the same and the front appears nearly as it did in a published photograph taken around 1900. We proposed to place the 12-inch square marble plaque outside on the brick face and with fast drying two-part epoxy; handy church members were able to affix it after the ceremony. 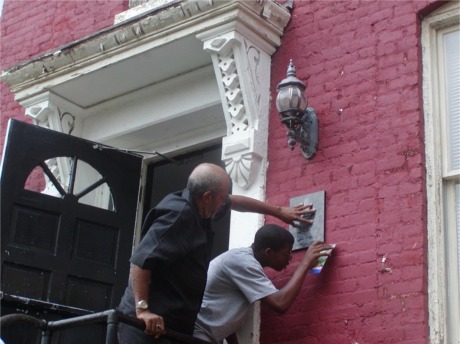 Fixing of the plaque to the outer surface of the fellowship hall. All photos from here forward by Lynn Palmer.

About 50 people participated in the plaque installation including NASA historian Dr. Steve Dick, about 20 of the nearly 250 known descendents of Asaph Hall nearly 80 of whom had gathered in DC the previous weekend for a reunion, representatives of the U.S.Naval Observatory and also U.S.Congressman and amateur astronomer from Houston, John Culberson, from the 7th Texas Congressional District and his family. The ceremony took place indoors while outside it felt worse than a sweltering day typical of Houston in August. Speakers included myself, Superintendent of the US Naval Observatory Capt. Fred Tettelbach and Congressman Culberson. 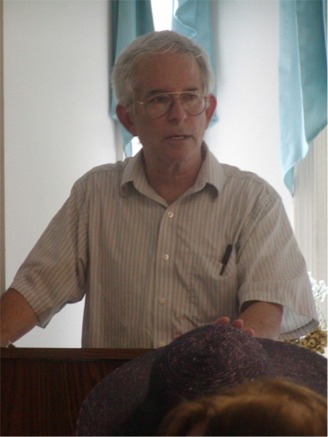 I was privileged to relate some historical items about Asaph Hall and his family as well as details about the Hall house itself. 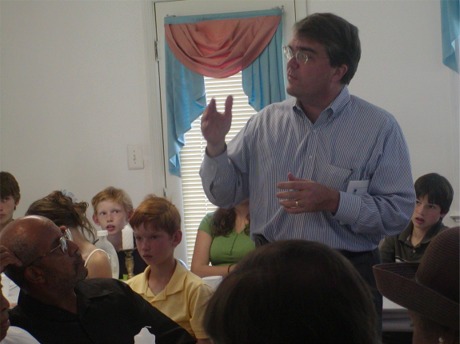 Congressman Culberson related political implications and initiatives he was working on. 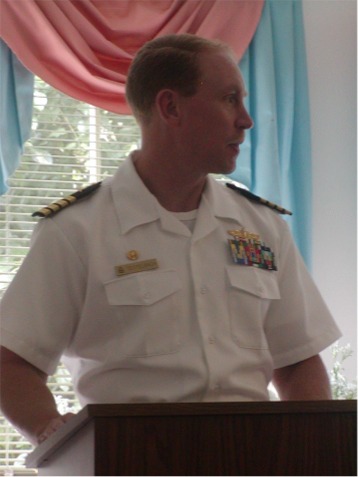 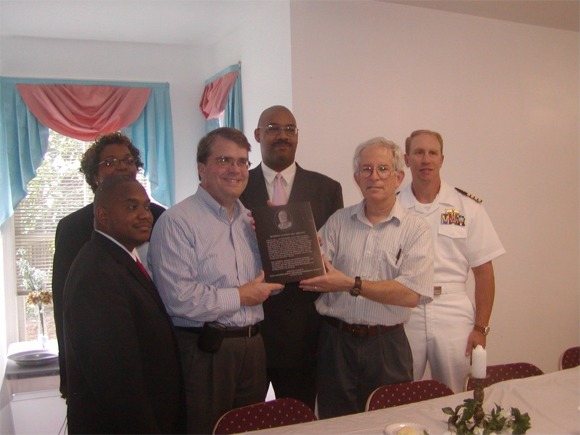 Presentation of the plaque. Left to right: Minister Roderick McLaughlin, Minister Patricia Chittams, Honorable Congressman J.Culberson, Rev. Ralph J. Chittams Sr., P.Maley, Capt. Tettelbach.
After the ceremony and reception, the plaque was bonded to the front of the building. Then, many of the participants drove to the current location of the observatory for a tour that featured the 26-inch refractor used by Hall. The USNO is now located along embassy row off Massachusetts Avenue. The vice president of the United States also makes his home on the grounds. The 26-inch telescope, believe it or not, is still in use today as a device for measurement of double star positions. The astronomical library is probably the best of its kind in the US and is in first class shape. On exhibit there, librarian Brenda Corbin showed off the medals given to Hall after his discovery and donated in 1998 to the observatory by family members. Also on display was the original log book of Hall’s notes describing his view of the moons. Inside the 26-inch dome, it was open to ambient air and just as hot and sweltering as on the street–96 degrees and 100% humidity. Historical accounts of how the telescope was used were provided. One unique feature was the wood closet structure located at the base of the telescope inside which the observer would develop photographic plates. It was related that once, the observer was trapped inside after the door knob had fallen off and attempted to claw and scratch is way out. Those marks are still visible on the interior of the door. 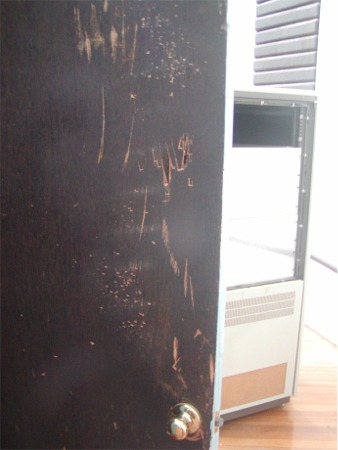 You can clearly see scratch marks on the door where the trapped observer tried to get out.

The Hall family was led by matriarch Enid Hyde Griswold who is the great grand daughter of Hall. She gave an introduction to the various generations of Hydes and Griswolds who descend from Angeline Stickney Hall and Asaph Hall on both sides of the family tree. Also on hand was Jonathan Hall, the grandson of Hall (the son of one of Hall’s four male offspring, Percival) as well as several clan members previously unknown. 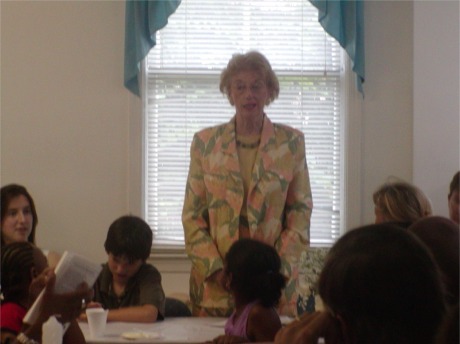 About 20 members of the church were on hand and they hosted a reception afterward. Many of them were on the USNO tour later in the day. 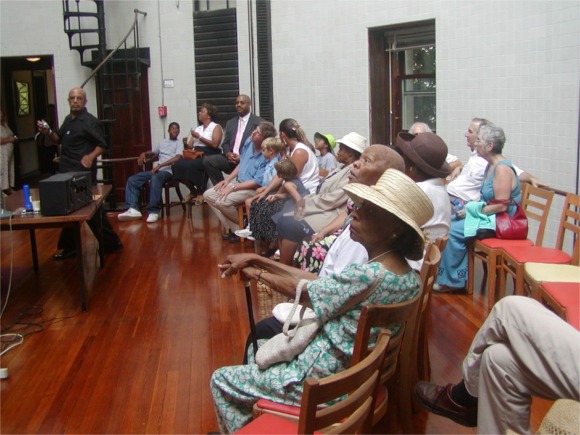 The church explicitly remarked that any members of the JSCAS who visit DC are invited to attend their Sunday service or to simply stop by and have a look at the plaque which is fixed to the right side (as you face it from the street) of the building next to the door frame. Though the church building itself is at 2715 N St., the real address of the fellowship hall (to its left) is 2709 N St. Either way, one can approach it by taking the Foggy Bottom metro stop and walking about 15 minutes into Georgetown.

What is remarkable about Hall’s achievement is that it is one of three major American planetary discoveries. James W. Christy, also of the USNO discovered Charon, the moon of Pluto, and Clyde Tombaugh discovered Pluto itself. Hall had to fight off jealousy of others. One newspaper account indicated his find was accidental. His colleagues backed up his contention that the search was a calculated effort on his part. His boss, Dr. Simon Newcomb had once given an interview to the press implying that he had been the one responsible for finding the moons but later retracted that. Newcomb’s confidential assistant Prof. David Todd, after Hall’s death in 1907 claimed to have been the first to see Phobos, but later this was immediately discredited. The 26-inch telescope had been in DC for two years and Newcomb had taken exclusive charge of it hoping for a great discovery. 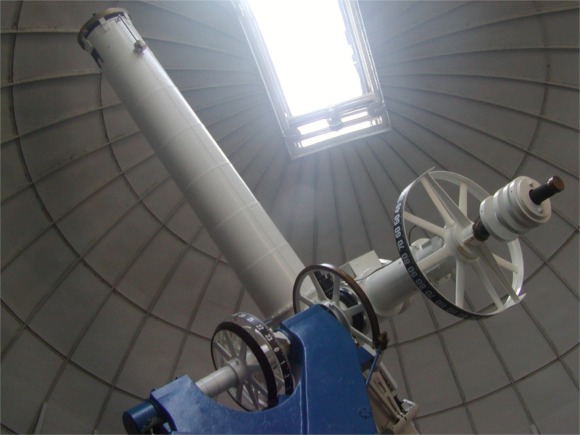 The famous 26-inch refractor.
In 1877 it was indeed the largest telescope in the world. After getting tired of observing and not finding anything, he turned the scope over to Hall who some months later used the technique of placing the bright disc of Mars just outside the eyepiece field of view in order to examine the area closest to the planet for signs of satellites. It is this method that proved successful and it is believed that others who had tried in the preceding decades had been looking too far from the disc to locate them.

Well before this time, in 1726, the American novelist Jonathan Swift had written in his classic book “Gulliver’s Travels” that scientists of the flying island of Laputia had discovered two moons around Mars. It was this fantasy that perhaps propelled interest by astronomers to look for them in later years. 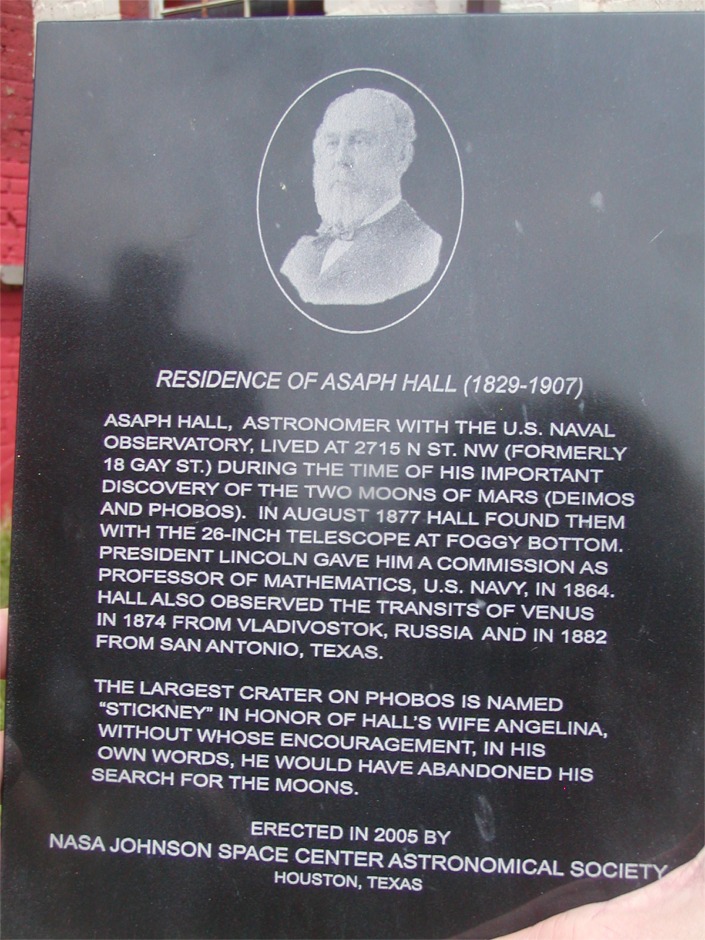 The JSCAS plaque.
There is no doubt that Hall’s wife Angeline had been the driving force behind his continuous effort to search for the satellites. In recognition of this the largest crater on Phobos is named Stickney in her honor and a much smaller one named for Hall. Unfortunately I messed up and misspelled her name as Angelina (references show her name spelled two different ways) on the plaque and this went unnoticed until 3 days after the plaque had been installed. Oh well, the good intentions were there!

In conclusion, the JSCAS is now part of the history of Washington DC. Visit Hall’s house if you are ever in the area. The building is easily accessible from the street and the plaque is clearly visible though set back from the street. You can walk through a small iron gate to reach it. Simply go to the Internet and look up a map for 2715 N St. NW, Washington DC and you should find it easily. I am profoundly grateful to the Alexander Memorial Baptist Church, Deacon Albert Holley, Minister Trish Chittams and church members for allowing us the privilige to com- memorate Hall’s life in their facility. Thanks also to Brenda Corbin of the USNO who coordinated the logistics of USNO participation and ceremony activities. 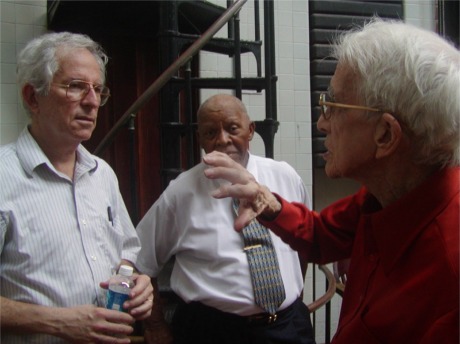 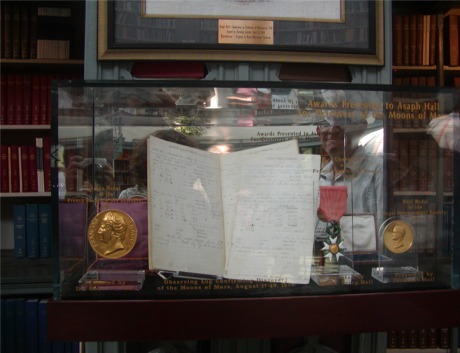 Medals awarded to Hall following the discovery of Mars’ satellites. Also on display are the actual observer log sheets completed by Hall documenting his observations of the satellites. 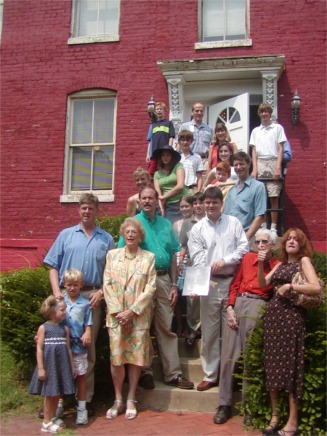 Members of generations of the Hall family congregate on the steps of the fellowship hall. 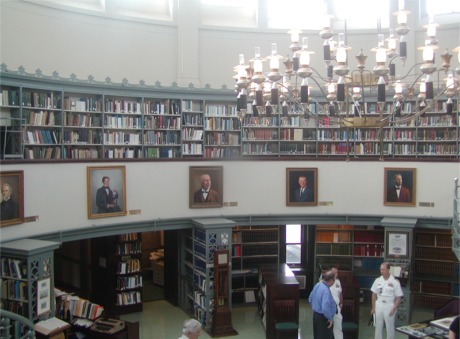 A view of the wonderful library of USNO with a vast collection of historical manuscripts and journals.

The ship “Moncton” on which Hall sailed in the 19th century to view an eclipse in Alaska. Hall is sitting and is the fifth person to the left of the person sitting directly in front of the ship’s wheel. 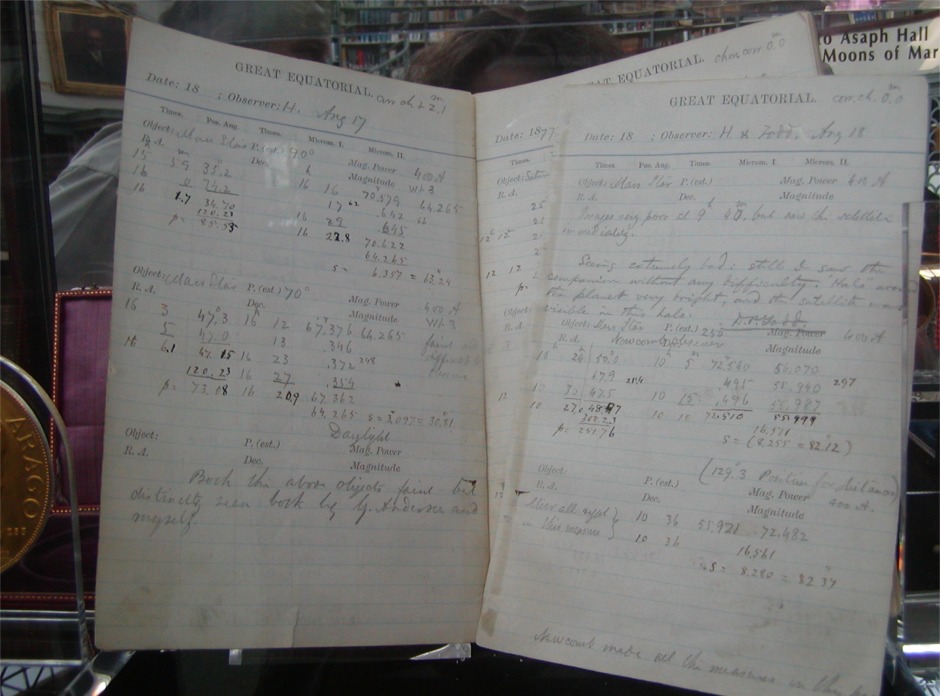 Closeup of the log Hall wrote in on August 17 and that Hall and others wrote (right side) on August 18. From this you can make out two features. First, a standard log format was used in 1877. Next, Hall confirmed that his boss Simon Newcomb and his assistant David Todd were able to see the satellites of Mars thus providing confirmation of the discovery. 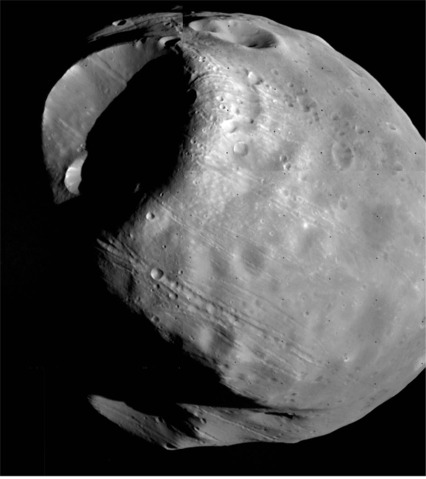 The largest crater on Phobos is named for Hall’s wife Angeline (Stickney). 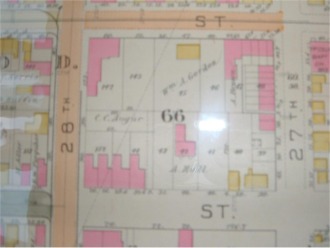 The platte showing Hall’s property in 1887. His house at 2715 N St is located in the pink shaded area under the number “66”. The main church building was built later and the lot to the right is empty during the period that Hall lived there.

The stairway today leading from the ground floor. 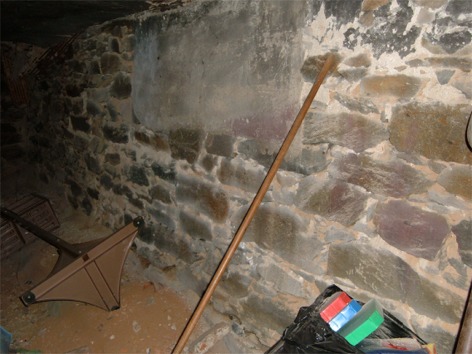 The wall of the basement looking much today as it likely did in 1877. 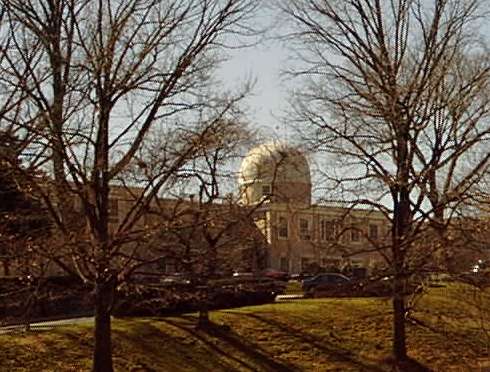 The old site of the 26-inch refractor at Foggy Bottom.