Some satellites such as the Galileo ventured deep into space and performed delicate interplanetary maneuvers allowing them to reach distant planets. The Galileo spacecraft first did a gravity assist flyby around the planet Venus and then made its first near approach to Earth on the first of two flybys. I planned to intercept this approach on Dec. 8, 1990, slightly more than 18 hours before the flyby. Prior to this, we believe the most distant satellite observation from earth was that taken by the 102-inch reflector in the Crimea of the Mars 1 probe at a distance of 200,000 km.

These images were captured using a 32-inch reflector from Danziger, Texas and a CCD camera by I. Saulietis and myself. The satellite was around 16.5 to 17th magnitude (approximately) at the time and a distance of about 608,000 km from earth. Prior to this time the most distant object I had observed was the Apllo 13 command module and S-IVB at the time of the ill-fated oxygen tank explosion aboard Apollo 13. This took place at a distance of about 249,000 km. This accidental observation occurred while G.W. Hoffler, I. Saulietis and myself were watching for flashes from the S-IVB from the observatory directly across the street from the Mission Control Center. The tank explosion was observed as a quarter-sized cloud on the TV screen we were using to monitor the field of view. An image-orthicon system was employed with a 16-inch Cassegrain telescope. Some Polaroid snap- shots were taken then, but after 20 years the cloud has all but faded from the pictures. 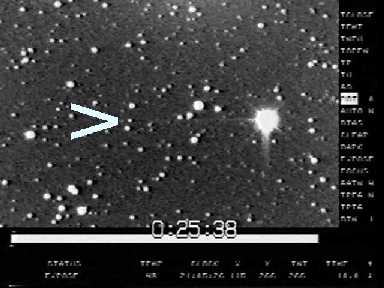 On the following image, Galileo has moved upward in the field and has merged its image with a bright star about four minutes after the prior photo was taken. 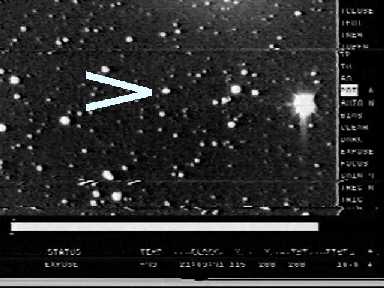