I photographed geostationary satellites in orbit 22,000 miles above the earth using a camera and 135mm lens and ASA 400 film from Brazos Bend State Park not far from Houston. Here are three such satellites located in close proximity. This is a timed exposure and the stars are drifting by as shown by the parallel lines. The three satellites remain essentially fixed. 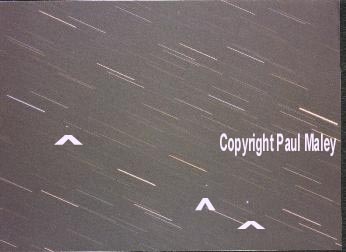 Some satellites at this high altitude will flash to naked eye brightness. As an example here is Telstar 401 which was recorded 11/26/00. It flashed up to +1 magnitude though some of its flashes were not quite naked eye brightness. Sometimes the big flash was preceded by another smaller one 5 seconds before hand. Here is the first faint flash. 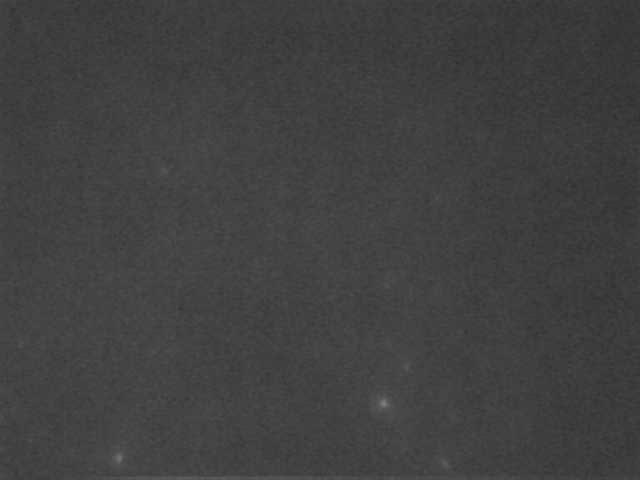 The next image shows the much more distinct and brighter, 3rd magnitude flash which occurred 5 seconds later. If you compare the two images (which have been extracted from video tape) you can see that there is a star in the lower left corner of the first frame that does not appear in the other. Nothing mysterious here. This is a consequence of using SNAPPY to capture images from video. Sometimes it will capture all point sources on a frame, sometimes it will not. 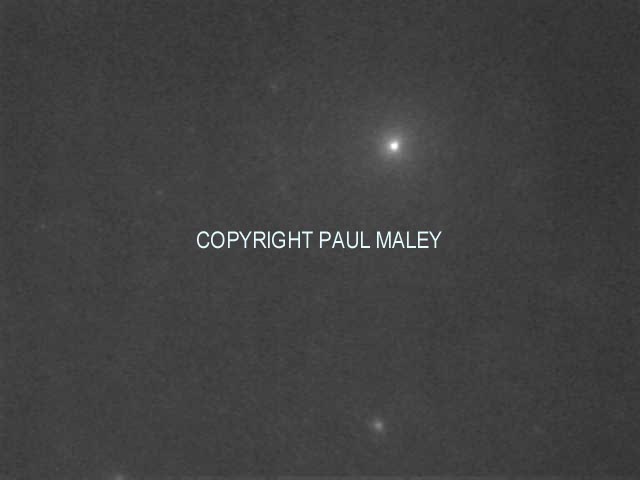 My earlier attempts at documenting geostationary satellites were primarily visual. However, the following were taken in 1982. 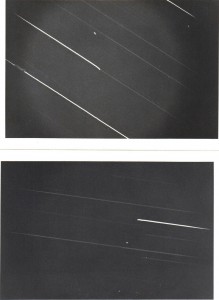 The Canadian ANIK spacecraft launched aboard STS-5 on November 11, 1982 was photographed from Houston, Texas on December 18, 1982 at 0643GMT. It was shot with a 2000 mm focal length lens on ASA400 film. Streaks are stars trailing throug the field of view. The short elongated line is the ANIK which moved slightly during the 8 minute exposure. It was on station at 117 deg W longitude.  Slant range 22133 statute miles.

Below that is the SBS satellite also deployed on STS-5 in geostationary orbit at 94 deg W longitude. I shot this photo at 0723GMT on December 18, 1982. The 10 minute exposure shows very slight spacecraft motion. Slant range 22829 statute miles.