The asteroid Antiope was revealed to be binary. Photo from ASTRONOMY.COM
One of the most exciting outcomes of asteroid occultation undertakings is the possibility to detect natural satellites of asteroids. Prior to the discovery of a natural satellite of the asteroid Ida in 1994 by the Galileo space probe, asteroid satellites were not proven to exist. On March 5, 1977 while attempting to observe an occultation of 3.6 magnitude Gamma Ceti near Victoria, Texas, I witnessed a brief complete occultation of the target star using a 13cm refractor. The actual occultation of the star by the asteroid (6) Hebe was observed positively in the Mexico City area at 02h34m54s UT. The prediction uncertainty was +/-60 seconds and the forecasted path was such that observation could easily have occurred from Texas, such was the state of prediction during this time. My observation of a 0.5 second outage of this bright star occurred at 02h35m00s UT at a site almost due north of Mexico City. This observation was reported to IOTA first followed a half hour later by that of Jose de la Herran from Mexico City. My site location was about 900km or 0.7 arcseconds displaced from the asteroid. D. Dunham ruled out duplicity of the star as a cause of the secondary occultation and we theorized in OCCULTATION NEWSLETTER, Vol. I, No. 11 published July 1977 that this event was caused by a natural satellite of an asteroid. Dunham initially suspected that if the Victoria observation is real, then it could be a satellite of (6) Hebe, its diameter being on the order of 20km. It was this singular occultation that set the stage for the hunt for natural satellites in orbit around minor planets.

Another such eclipse occurred on June 7, 1978 when another IOTA observer, James McMahon, saw not only the primary occultation but also the target star disappear 6 times within +/- 2minutes of the main asteroid occultation. Even though the observations of the 6.2 magnitude star SAO 120774 by 9.3 magnitude (532) Herculina were made with the star at low elevation above the horizon, Edward Bowell, using a photoelectric photometer from a different location, recorded a 5.3 second occultation at literally the same time that McMahon saw a 4.0 second outage. These observations were consistent with a satellite about 50km in diameter situated 990km from Herculina. 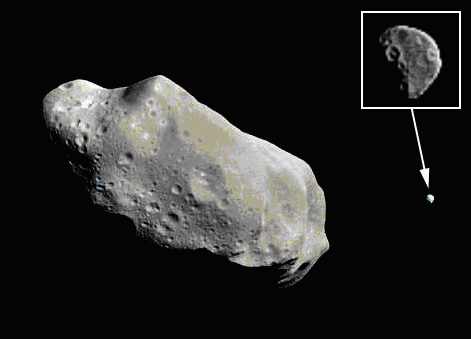 However, it was not until 1994 when the Galileo spacecraft flew past the asteroid Ida, that an image revealed the first real satellite of an asteroid. Coincidentally, I observed the first Galileo gravity assist fly by of the earth and established a record distance for detecting a man-made space object at the time (1990). See my SATELLITE PAGE under the sub-page DISTANT SATELLITES for those images. Also reference:

The asteroid Pulcova is also shown to be two separated objects but rather than being two objects of similar size, this one clearly has a satellite. Photo from ASTRONOMY.COM

A number of other satellites have been imaged directly from earth by professional astronomers, in particular the work of W. Merline of Southwest Research Institute, expanding the known population gradually. (Another coincidence: I worked two summers for Southwest Research Institute in San Antonio, Texas under Terry Green as an undergraduate student in 1965/66 before this type of work began.) As of January 2012, there are at least 201 binary asteroids and others that are multiple.

Keep track of the latest discoveries from:

Due to advances in the searches for extrasolar planets, there are probably more of those type of objects that have been ‘confirmed’ than asteroid satellites up to this time. The continued effort to participate in asteroid occultation studies may help to verify existence of other satellites in the future and to affirm the density of this population in our solar system. In addition, perhaps the existence of a satellite in orbit around a satellite may also be discovered.

In 2012 the asteroid 911Agamemnon eclipsed a star and was observed from the northeastern USA. Steve Conard recorded a secondary occultation and this is believed to be a satellite of this asteroid.  The graphic below shows the relative location of the satellite as compared to observations (horizontal lines) made by individual observers across the face of Agamemnon from different locations. This is the most convincing video of a possible asteroid satellite, although there was no corroborating data.

January 19, 2012 observation indicating a possible satellite (to the left) of asteroid 911 Agamemnon.