The Moon covering the Sun as it advances to only a 28% eclipse of the Sun. Lynn Palmer photo.

Another successful expedition concluded on May 2 when we returned to Phoenix from the April 30 partial eclipse of the Sun.  There are only two solar eclipses in 2022; both are cases where the Sun, Earth and Moon line up but not precisely so that only a portion of the Sun is completed covered by the Moon.  While I enjoy organizing and leading solar eclipse expeditions they involve  either a total solar eclipse(TSE) or annular (ring) eclipse (ASE) since they draw the most interest.  However, when it comes to a partial solar eclipse (PSE) I sometimes enjoy these even more. Why? Here are some reasons: 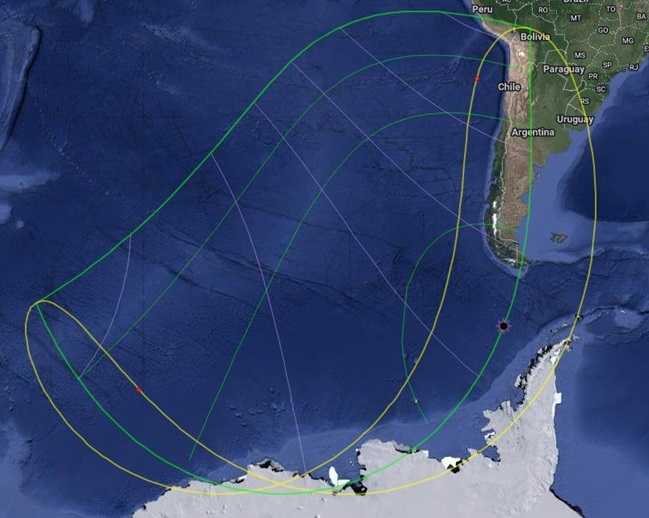 Geographic area (inside green and yellow lines) where the eclipse could be seen. The maximum obscuration of the Sun would have been in the ocean between Chile and Antarctica at 53%.  Courtesy X. Jubier. 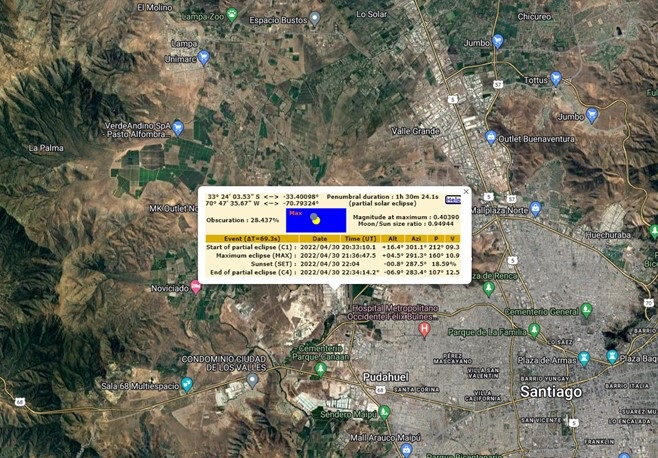 This PSE like others I have seen allowed for plenty of preparation time and because the path is not narrowly defined it is possible to observe it from a large geographic area.  This partial eclipse was an example where all 4 advantages of attending it were put into play. From the region of visibility in the above map Santiago, Chile was easily accessible by air from the US.  I had planned to go to Easter Island but tourism had not yet resumed there so access was impossible.  So, my wife Lynn Palmer and I flew from Phoenix to Houston and then Houston to Santiago.  However, since the pandemic was not over on a worldwide basis there were bureaucratic challenges that complicated any such plan.

We used frequent flier miles to upgrade to business class on United Airlines and that helped make the trip more bearable. But here we found that the pandemic had taken an unexpected toll on airline services. United used to be a pleasure to fly internationally.  Our first flight Phoenix to Houston was over 2.5 hours and there was no meal even at lunch time! We were able to get into the business class lounge at Houston Intercontinental Airport and found that service there was super slow and food portions were very small and not very tasty. Then we got on the plane for Santiago and experienced a movie system that kept stopping every 3 or 4 minutes and took a number of minutes to restart–really annoying and disappointing. On a different aircraft May 1 back to Houston the same problem occurred! In addition, the food on both legs was really bland and of poor taste! 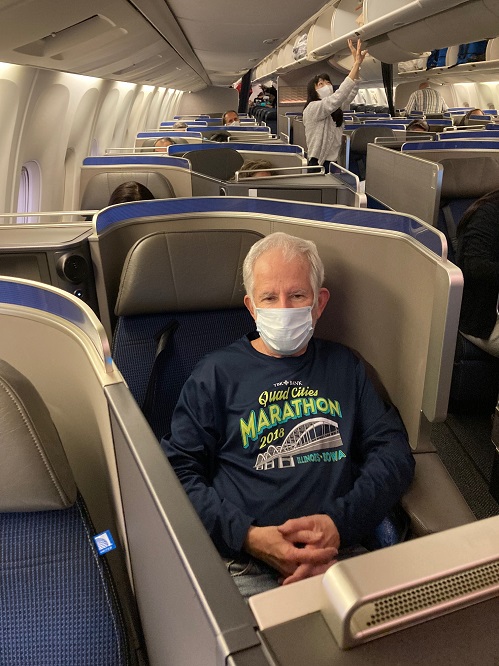 On the way from Houston to Santiago. Masks required. Lynn Palmer photo.

Our base of operations was the Holiday Inn at the Santiago International Airport. It was easy to get off the arriving plane and walk through the terminal to the hotel. No problems. However, we found that even though I had booked the hotel months before with specific requests to have a room on the top floor, we were given a room below ground!! 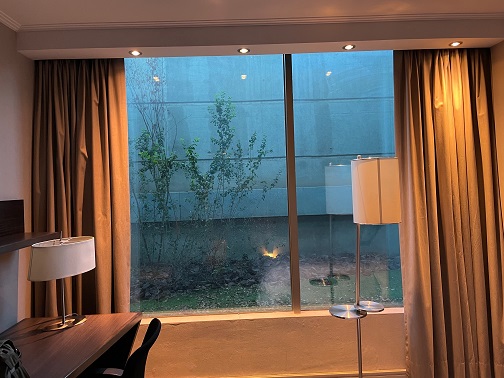 How could we see any part of an eclipse with a view of a high wall? 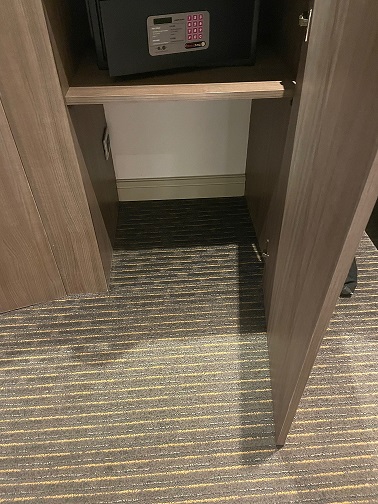 We found there was no fridge in the room just a big hole where one used to be–another pandemic outcome.

Even later when we the hotel finally allowed us to change rooms there were no mini-bars or fridges in any room. The only benefits of being below ground was that the heating system worked really well and we had a walk-in shower. After complaining about the original room location (069) later that day (April 29) I was able to get our room changed to 613 which was the top floor even after the hotel said all rooms had been fully booked. I really appreciated Holiday Inn honoring this request.  Once we moved to that room we found again no fridge in the room, the heating system did not work (I was able to get a portable heater which did work) and we did not have a walk in shower.

We scoured the airport for places to eat but after checking out both the national and international terminals found that the Holiday Inn was best. In fact their obscure paper-copied menu had food items that we were wary of since there was no real description or photos. But we were pleasantly surprised that after all the hassles with the hotel itself, the restaurant food was really good. 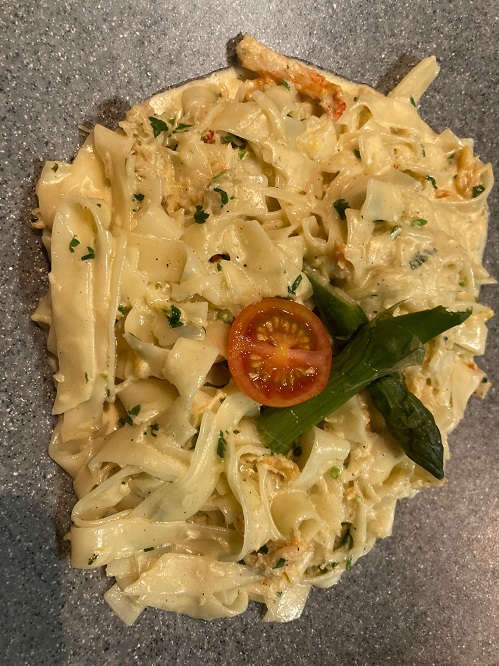 Seafood fettuccini.  This was a truly appetizing dish.

The photo above provides a good example. I had an American burger (twice) which I expected to be dry and tasteless but turned out to be juicy and fantastic. Lynn had the fettuccini and it proved extraordinarily tasty.

On April 29 we surveyed various places at the airport. I knew that the Sun would still be eclipsed at sunset so the idea was to find a location that had a flat horizon. Regardless of our site choice there was a mountain on the west-northwest horizon that cut off the Sun as it sank behind it at an elevation of about 2.5 degrees. So, I found a number of spots that gave us that nearly flat horizon. The area I settled on was a small platform where that night an entire crew of technicians and dancers assembled equipment and practiced on the same platform! This made me apprehensive about using the site on eclipse day. Nevertheless, we went back to that platform and checked it out. Everything had been dismantled and it was good to go. 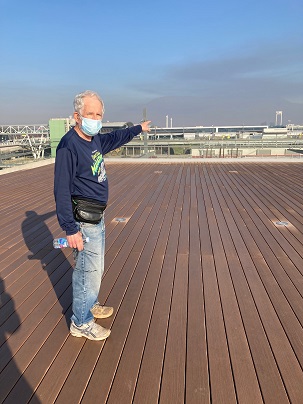 My observation site with a view almost to the horizon. Notice the low fog in the morning that dissipated after a few hours.

My equipment was rather simplistic. It consisted of a 35mm DSLR Nikon D5600 with a 300mm lens. I also brought a second camera Nikon D3100 with a 300mm lens and 1.4x extender.  I took test exposures prior to departing Arizona so I would be sure of the correct combination of f/number, ISO, shutter speed and focal length. But because there was no need for ‘long’ exposures I did not take a tripod. 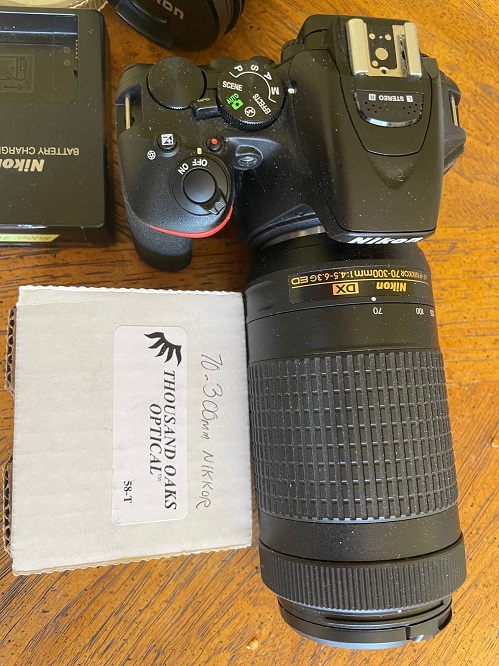 One of two cameras I brought with an ND5 solar filter.

Eclipse day was Saturday April 30 with the start occurring at 4:33pm local time and ending around 4:47pm with formal sunset at 6:04pm.  I decided to create a laptop timer display so Lynn could easily see how much time was left before the partial eclipse began. I left our hotel room for my separated viewing site at this point. 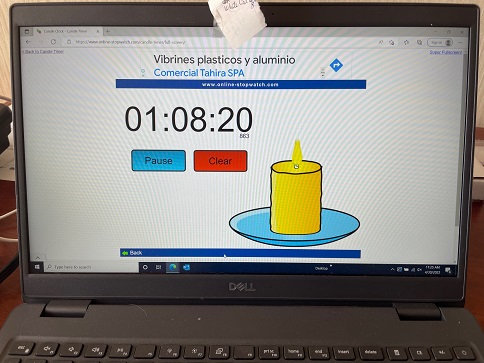 To give us a different perspective Lynn remained in the Holiday Inn and observed out the hotel window. We knew there would be effects from the glass but it also presented an opportunity to make crescent sun images by an accident of hotel room design. A desk chair in the room had many small holes in it and presented an unexpected tool from which to create crescents. 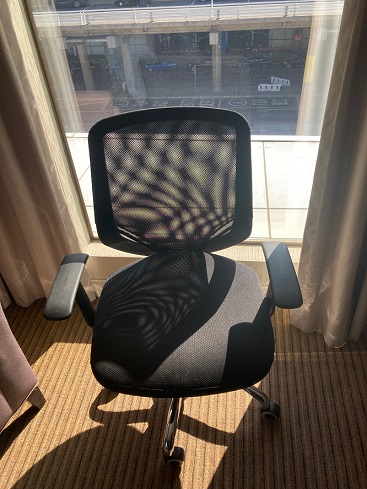 The desk chair used to make solar crescents. This is a view of the window showing  how close we were to the domestic terminal. 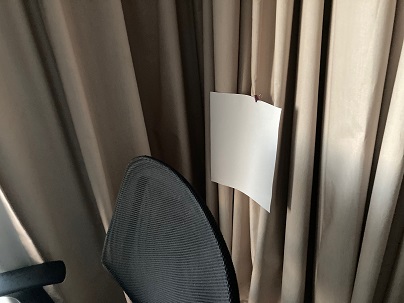 To make solar crescents Lynn came up with the idea of projecting through the chair onto a white piece of paper.

Between 500pm and 530pm it was possible for enough of the Moon’s disc to block some sunlight to create the crescents. Also, because the angle of projection was offset from the perpendicular we knew the crescents would not always be in focus. However, the image below shows the result. 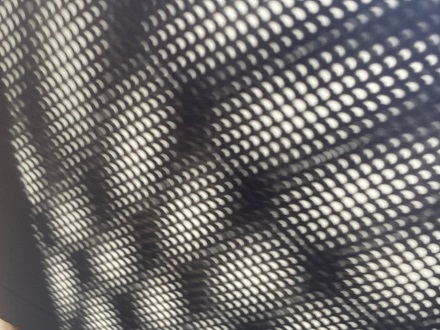 Crescent Sun closeup. Lynn Palmer photo with Nikon Coolpix camera. Because of the angle of projection each one looks different from the others when in fact only a quarter of the Sun was covered at maximum eclipse.

Meanwhile out on the platform I had to sit and wait for the start of first contact. 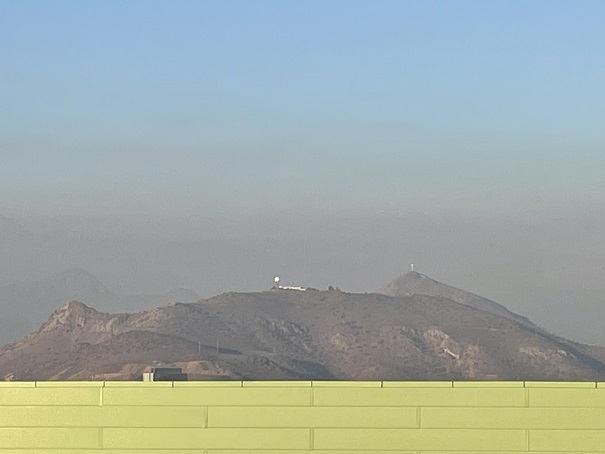 Air pollution (visible in this image) from Santiago made seeing relatively stable. 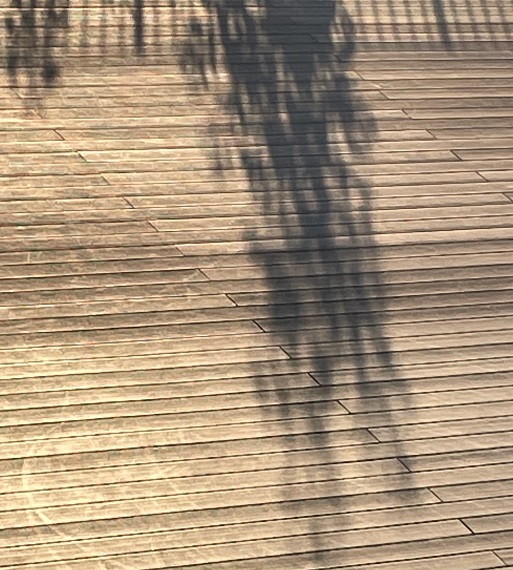 No crescent Suns visible from the trees located below my site. Crescents can only be projected by trees with certain leaf design and spacing. 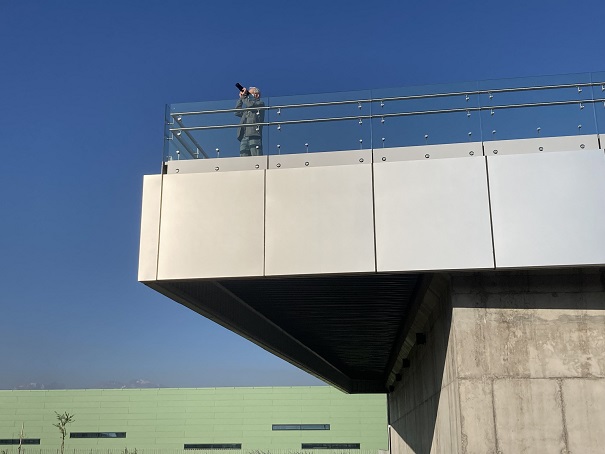 While waiting for the eclipse I was able to spot people walking by or sitting down in various places from my perch on the platform. Nobody appeared to look at the Sun and there was no publicity about it in the local newspaper. 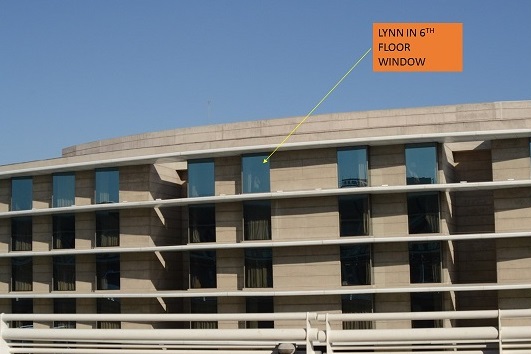 Lynn’s location at the Holiday Inn.  Our rooms faced west northwest in the direction of the Sun.

Lynn taking photos with a Nikon Cookpix camera during the eclipse. 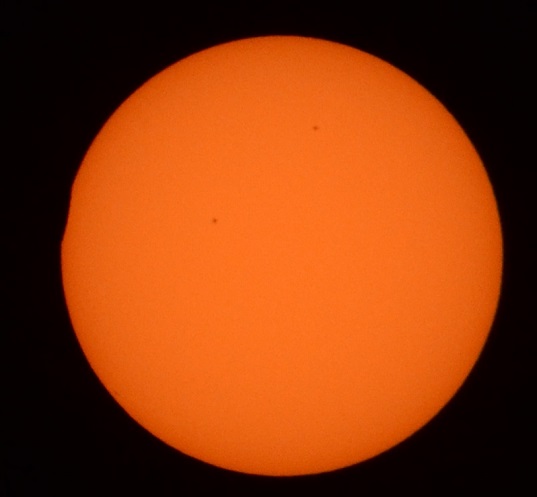 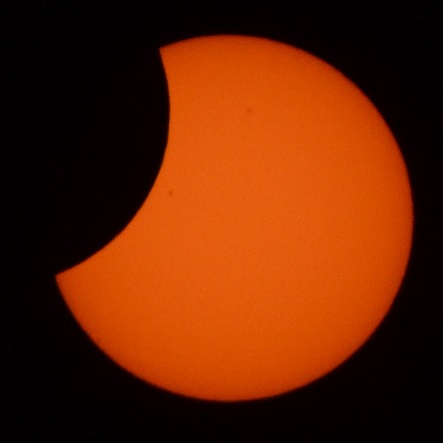 5:08pm.  The same two sunspots are less in focus as a consequence of slow descent into greater atmosphere. 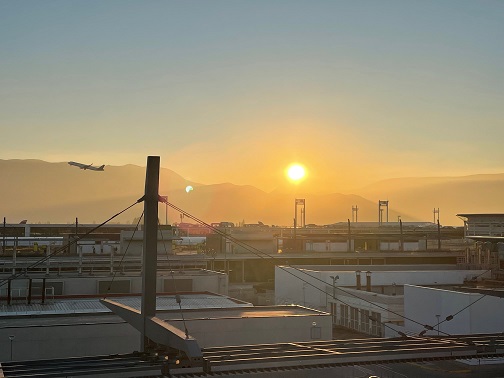 One of a number of airplanes that took off during the eclipse. One even passed directly between me and the Sun. Note the mountains on the horizon. 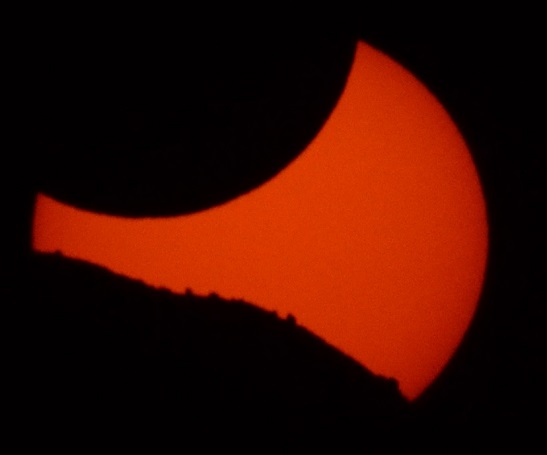 5:46:30pm as the Sun descends into the mountain on the horizon. 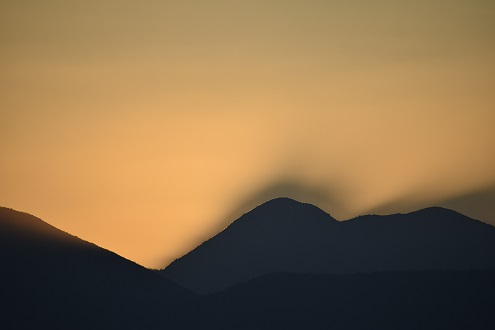 Shadows cast by mountains after the Sun had passed behind.

And here I thought it was the end of our adventure.  The Venus-Jupiter conjunction which had been ongoing the previous few days was blocked on our arrival but complete overcast due to fog. So, it was a great and happy surprise that when I walked outside the hotel to check the air temperature for my upcoming run that I saw clear sky and the two planets so close together. 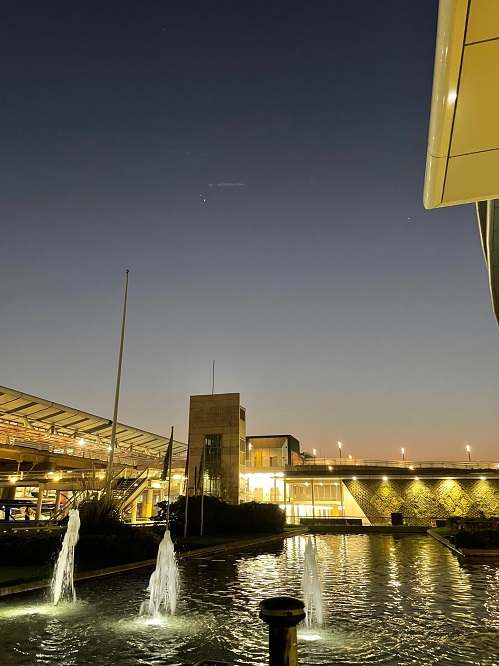 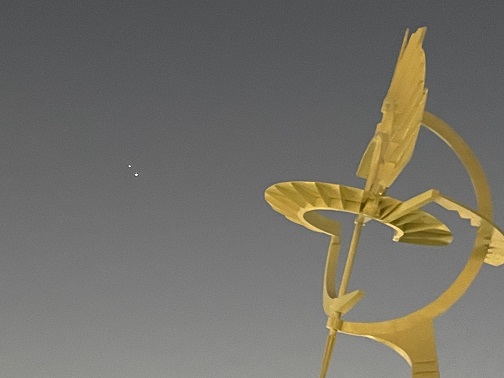 A closer view of the conjunction against a large monument inside the airport.

I was able to complete my 2 mile training run on the grounds of the airport. I try to do this religiously during every international trip. 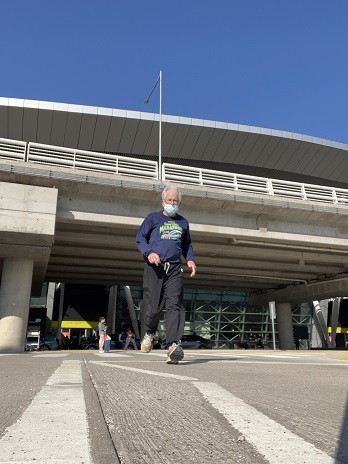 May 1 morning run in front of the international terminal. Mask required. 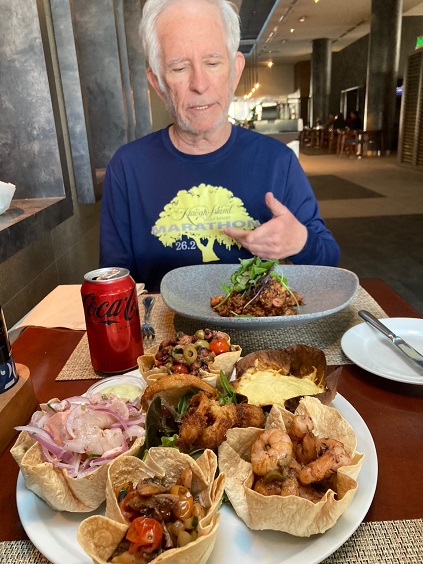 After this highly successful eclipse we shared a seafood lunch on May 1 in the hotel. It was really great. No meal is complete without the Chilean version of Coke Zero.  Compliements to the Holiday Inn restaurant. No mask required while eating.  A happy ending to a very challenging trip.

We now turn our attention to planning for the next partial solar eclipse October 25, 2022 in the Middle East area.