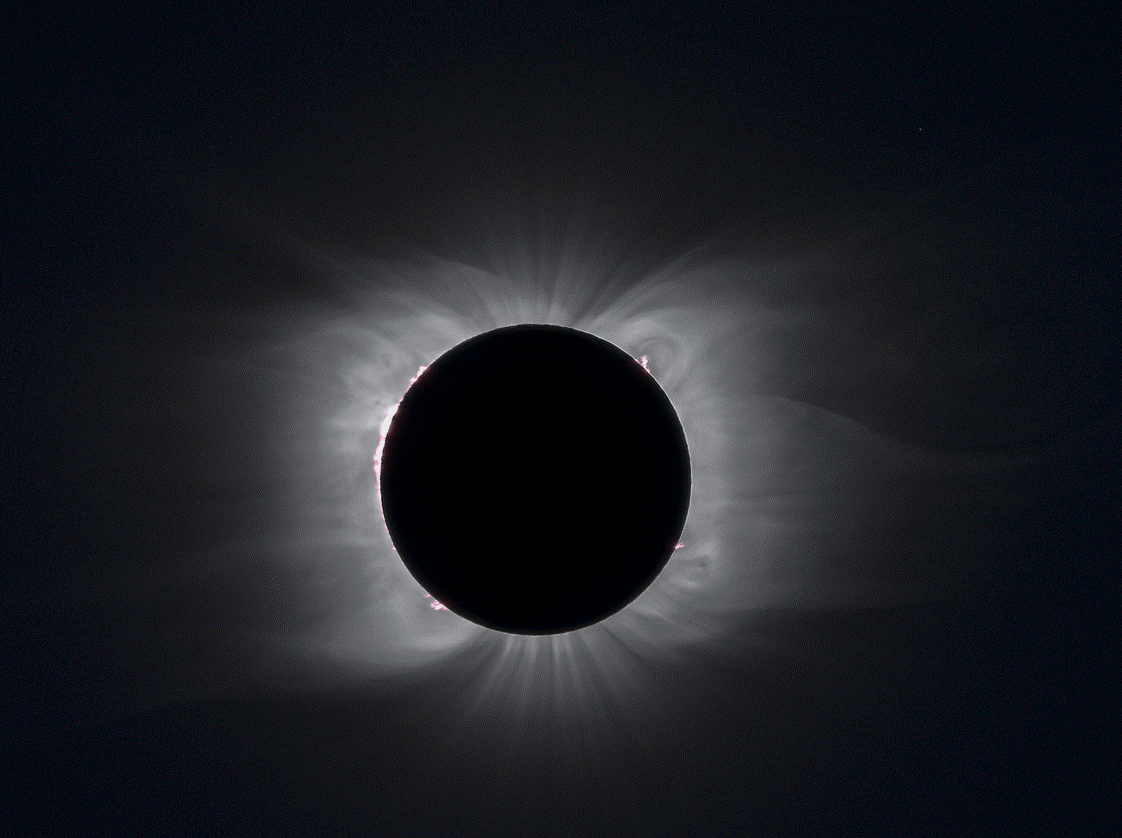 The December 14 total eclipse as depicted in a series of stacked images. Photo by Chris Alexander.

The following is a description of the December 14, 2020 total solar eclipse which for most of us was only seen on the internet due to COVID-19.  This was the 2nd solar eclipse that we have had to abort due to the hazards of the pandemic.  Two members of our original group traveled independently, but the rest of us had to watch on the internet. Of course, the total eclipse did occur and it appears few foreign observers entered Argentina. A travel ban went into effect in March 2020 right after I left Argentina from a site survey and as recently as two days after the eclipse, both the CDC and Dept. of State in the US maintained their ongoing advisory against any and all travel to Argentina: “The Department of State has issued a Level 4 (‘Do Not Travel’) advisory for Argentina for U.S. citizens due to COVID-19.“

I had visited Argentina in March 2020 at the beginning of the awareness of the pandemic. I had planned to site survey for about 8 days visiting the western mountainous area north of Bariloche as well as coastal sites near Las Grutas. An example of a good location is shown below.

Why consider Las Grutas? This location was chosen because it was geographically distant from Bariloche; in addition it was because in 2027 we may travel there to observe an annular solar eclipse occur in that same town.  It will be during their summer time so the weather should be nice. 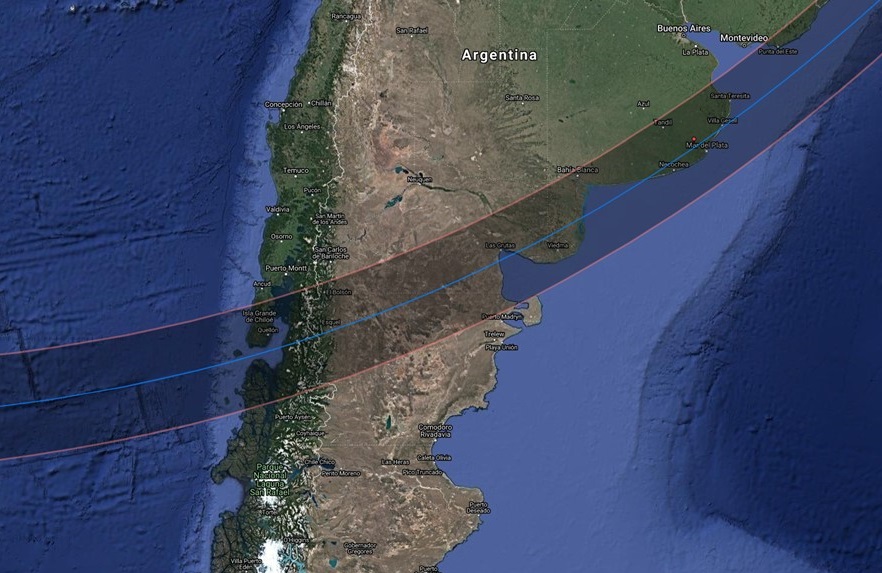 The scenery in western Argentina can be spectacular and when the sky is clear the blue sky is really blue.

In March I spent hours and hundreds of kilometers driving about Argentina looking for good sites for our groups. Below is an example of a lake and peaks. During the trip I became concerned that the pandemic was going to impact our survey trip travel in Argentina and decided to cut the trip short by 3 days. Fortunately, Lynn and I were able to leave the day before Argentina’s president announced a travel lockdown.

One hurdle we passed was the ability to bring liquids onto internal flights on Aerolineas Argentinas.  This was one of the nice features about flying internally inside this country.

Traveling unfamiliar roads I had to evaluate the risk of using one or the other given that there were few options in reaching specific sites. Often a hint was needed such as shown below.

My planned group (tour 2) had a base in the small coastal town of Las Grutas where we had access to a nice road running along the path with plenty of places where we could stop if needed and to outrun cloud.

The eclipse was set to become total at 1pm local time in Argentina. About 2 hours prior the weather satellite image showed a lot of cloud cover and the weather models the day before the eclipse predicted high winds as well as total cloud cover across the entire path. 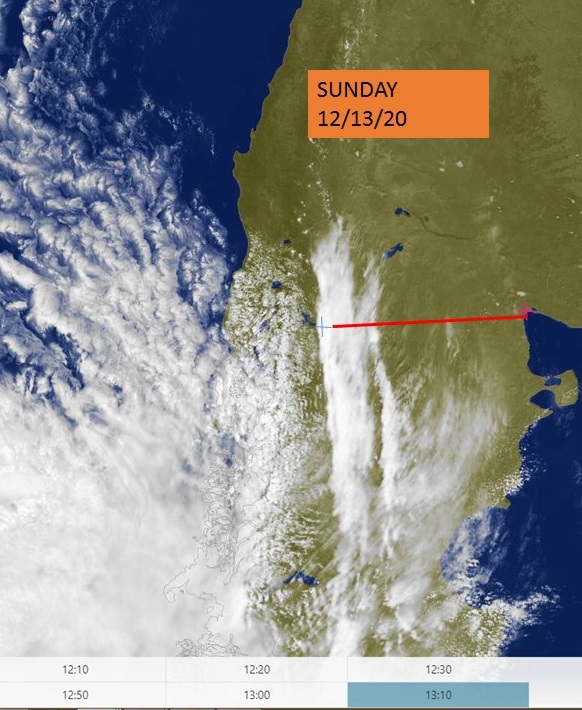 However, things started to improve within 12 hours of eclipse time though the high winds, especially in the Bariloche region were blowing fiercely.

Our Las Grutas site showed a lot of cloud as seen in the image below 44 minutes before totality. However, we had buses ready to go and we would have been well west of this location. Notice on the far right the coast outline. Although it appears clear in this image, during totality people on the east coast (far right edge) did see totality but clouds surrounded the area and there was also rain. 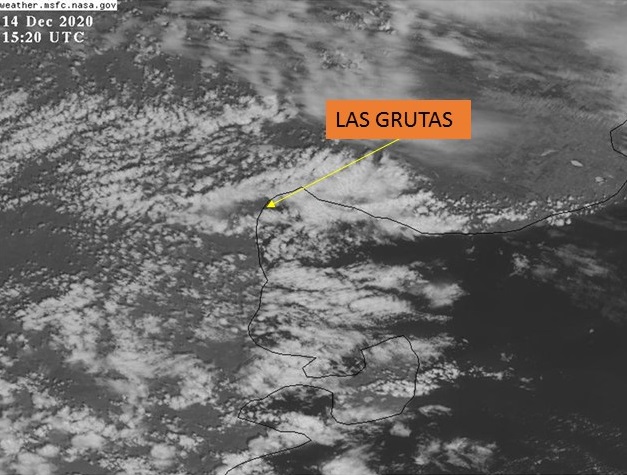 Satellite image showing the coastal site at Las Grutas. The sky to the west was in much better shape. Courtesy MSFC NASA Spaceflight Center. 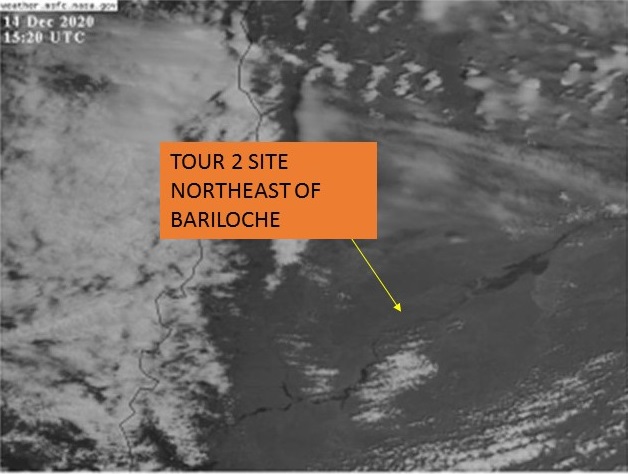 Predicted orientation of bright planets and stars during totality. The Sun is at very high elevation on this day.  Because the sites were in the southern hemisphere the view is opposite that which we see in the northern hemisphere.  Jupiter and Saturn would be 7 days from their closest observable approach in nearly 800 years.

This was invaluable for the thousands who were unable or unwilling to enter Argentina. When I first logged on there were more than 10,000 viewers on one site alone. I had a number of sites chosen as possible locations. Here are screen grabs prior to totality from a few of them.

In Buenos Aires, Argentina where only a partial eclipse was to be seen, it was well advertised. 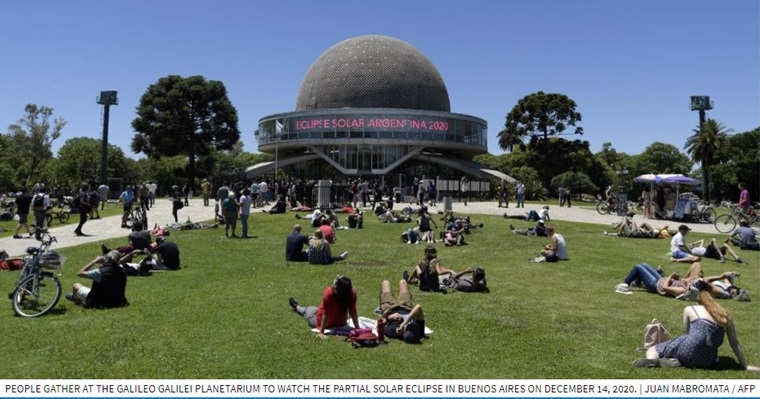 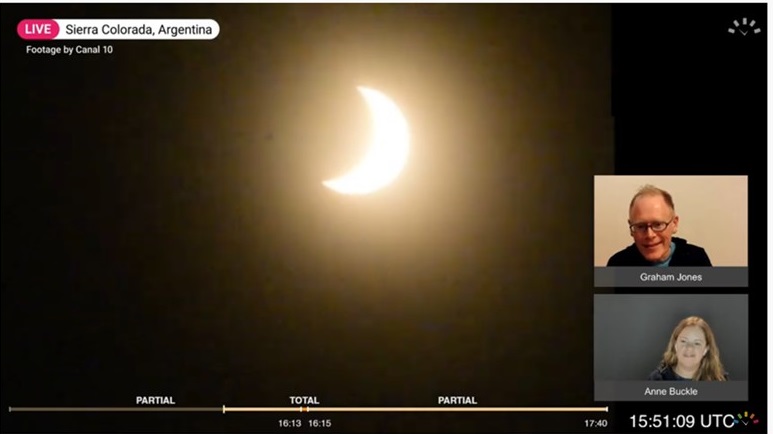 This site was one of the more remote for bus travel. Note the UT time in the lower right corner. Totality was supposed to be at 16:02 but you can see the Sun is just half covered. So, there was considerable lag depending on the site in time from the images displayed to the ‘real time’ clock. This was very helpful since it allowed me to avoid missing critical coverage.  This was from Sierra Colorada, courtesy of YouTube. 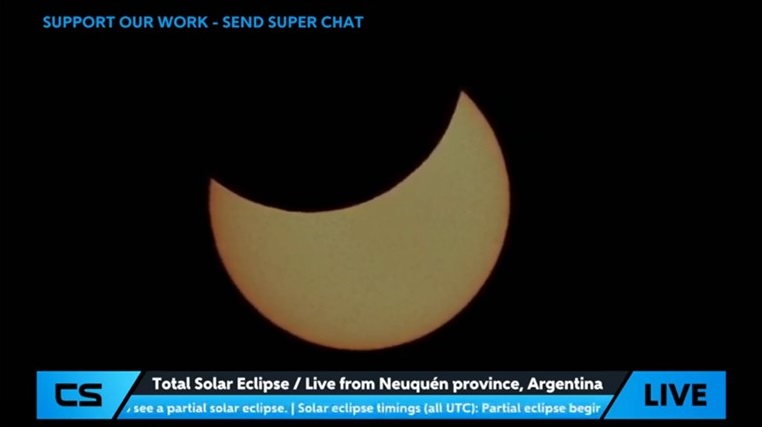 This is was a choice for the tour 2 group northeast of Bariloche and was likely producing the very best images online. Courtesy YouTube. 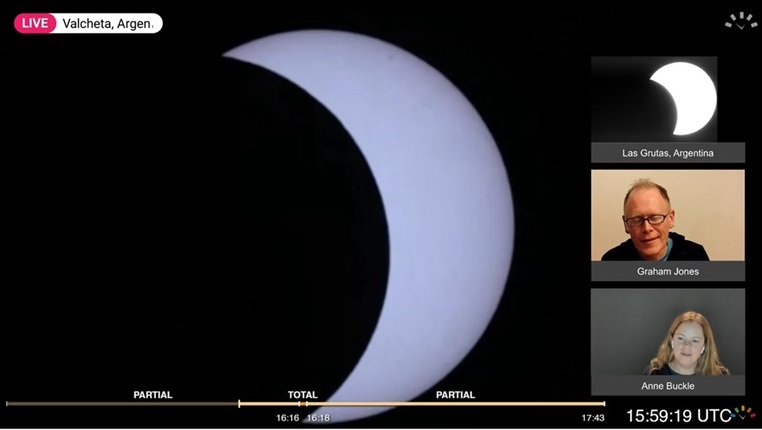 Another site for tours 1,3 was Valcheta, just west of Las Grutas. Here again, spectacularly clear partial phase images. Note the time indicated it was 3 minutes before totality but you again can see the huge image time lag. 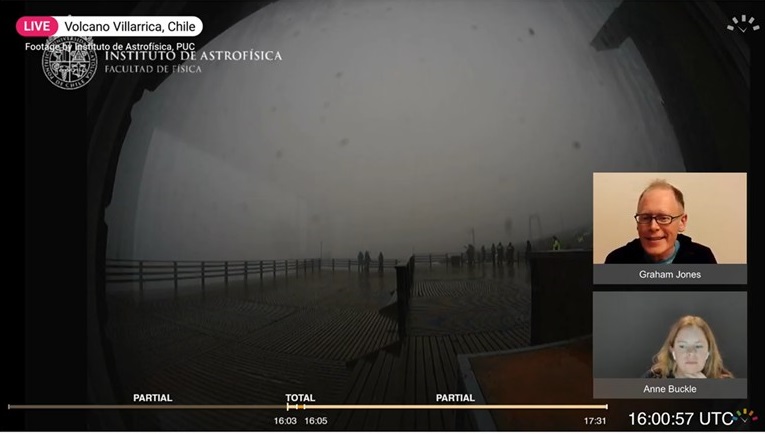 Just across the Argentine border was a camera set up for those at the Villarica volcano. You can see the depressingly overcast video. Not all had great views of totality. 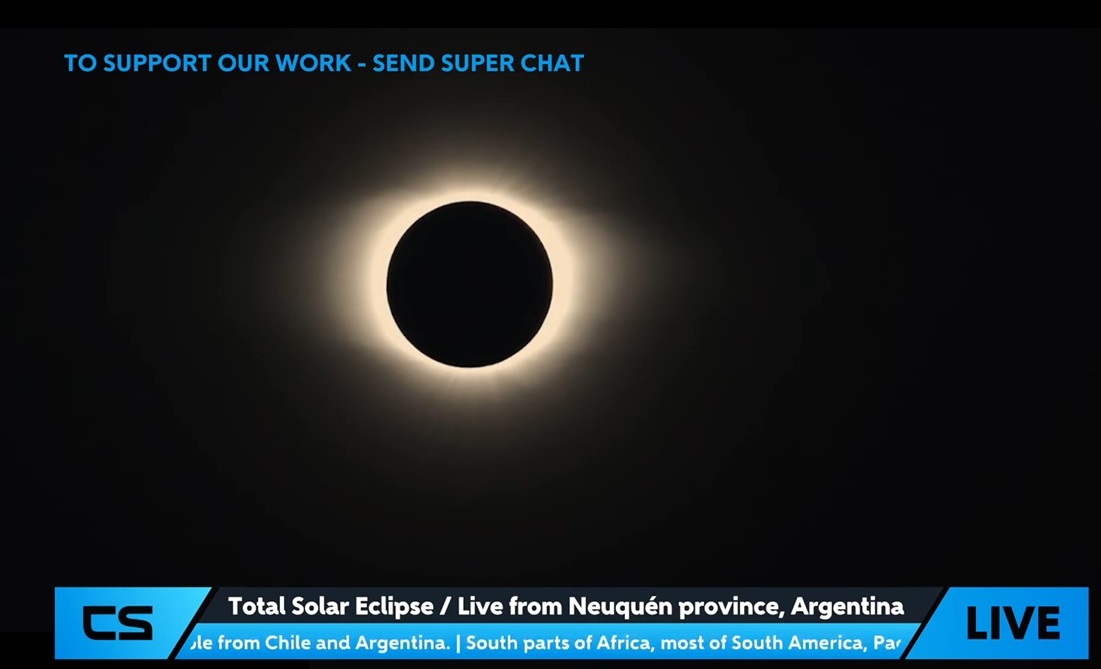 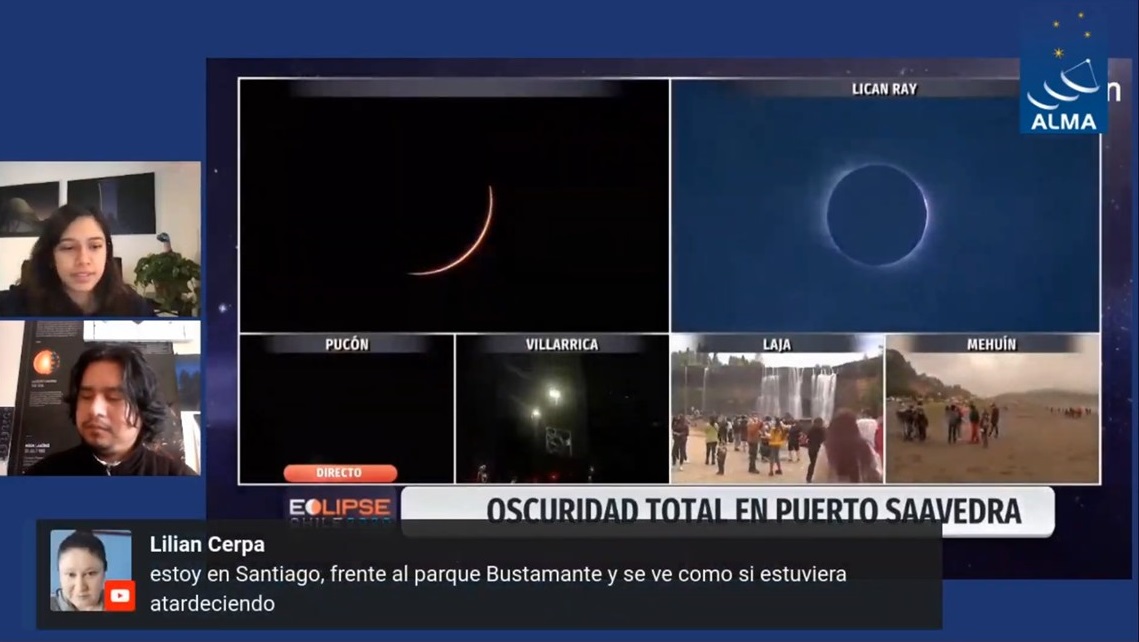 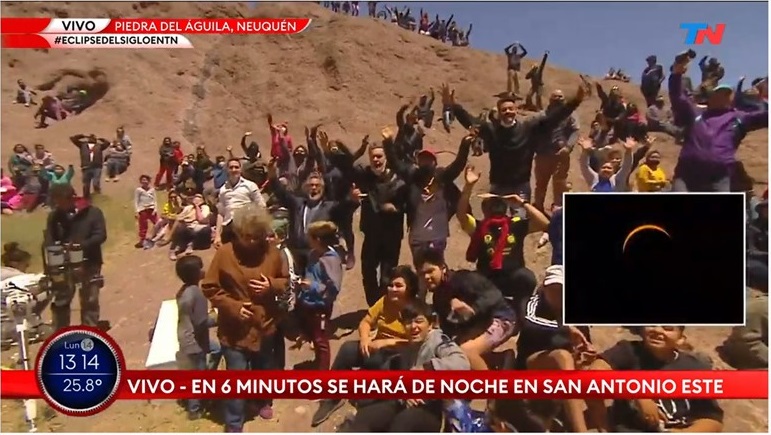 In the screen grab above I noticed two things: 1) there appear to be mainly local people in view; 2) hardly anyone is wearing a mask; 3) no social distancing. These latter two factors were part of RING OF FIRE EXPEDITIONS concern in traveling to Argentina as without these basic precautions our groups would have been of major risk. 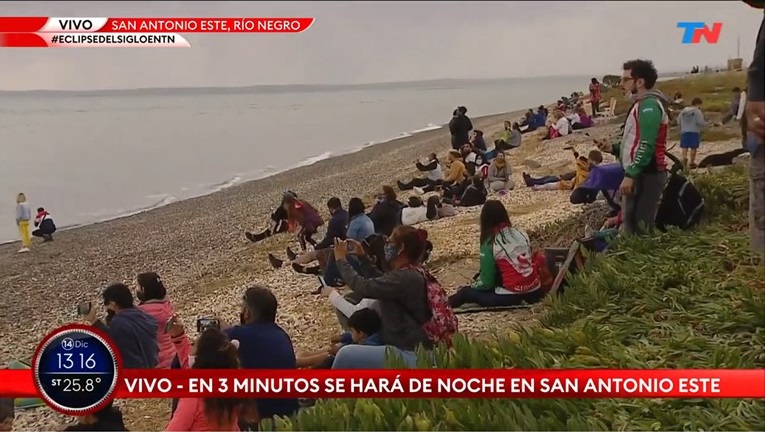 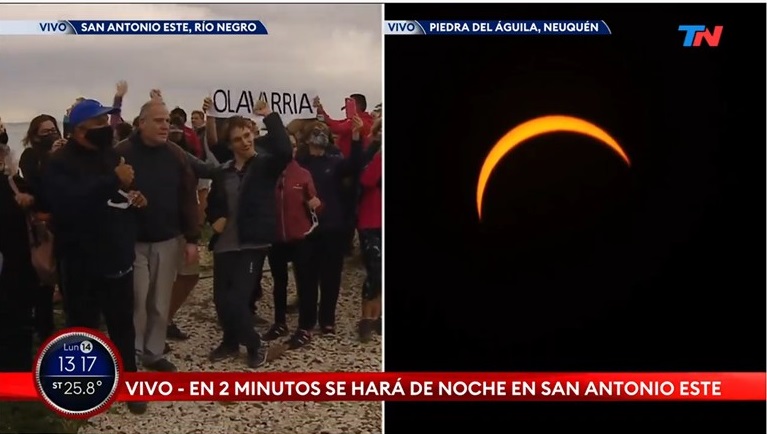 The view from the same site just after totality. Courtesy YouTube. 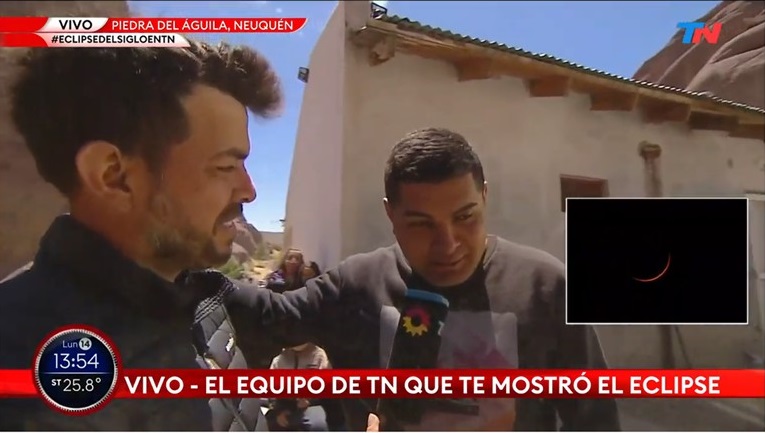 An interview after the eclipse where nobody is wearing a mask. Courtesy YouTube. 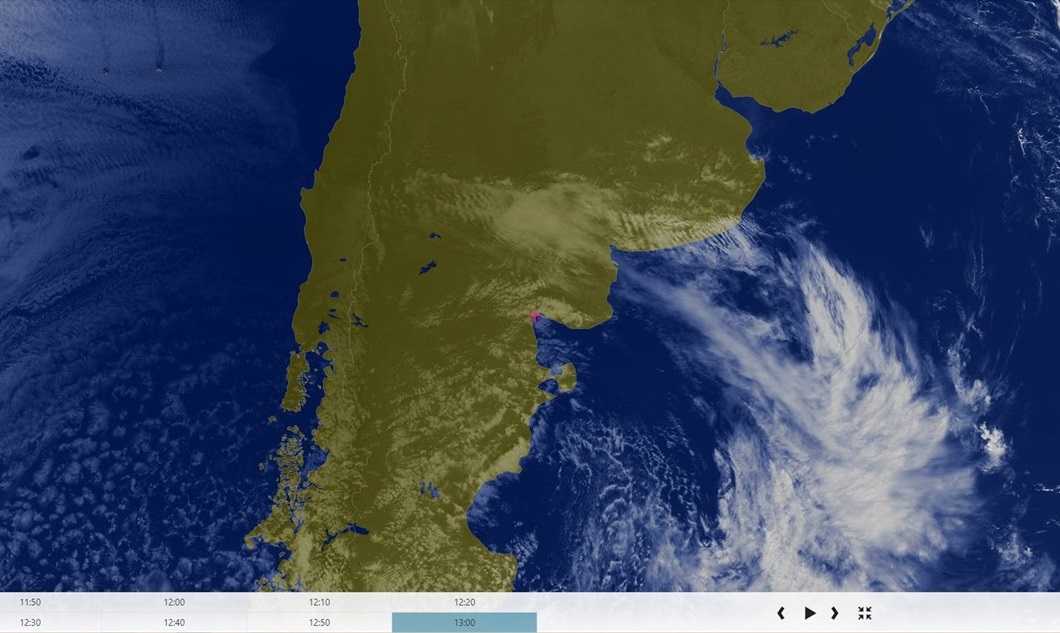 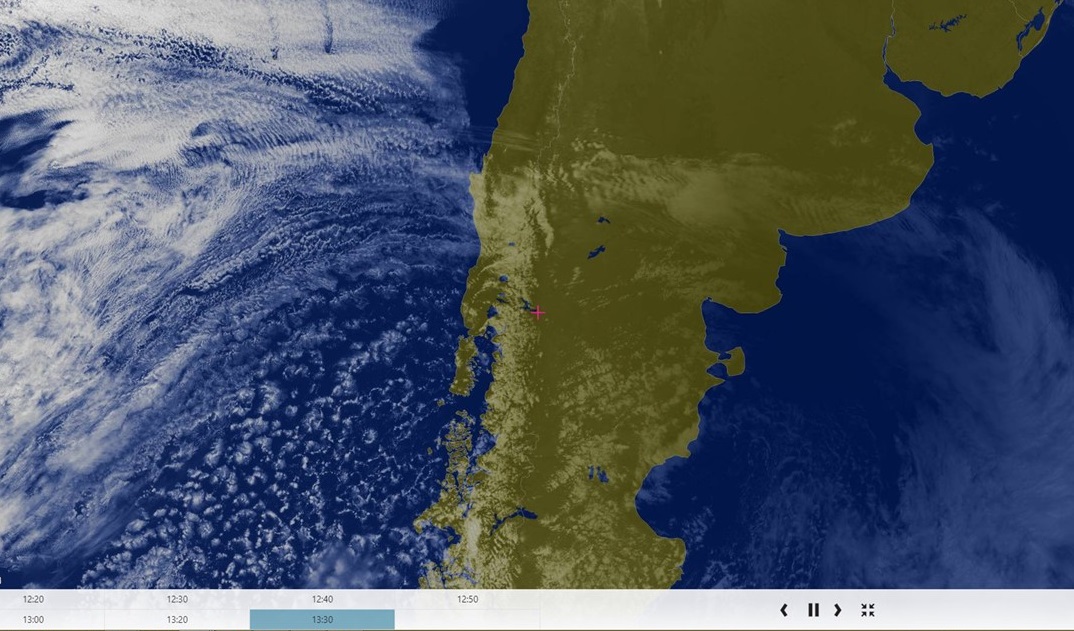 Moon’s shadow to the east of Argentina 30 minutes after totality. Courtesy Meteoblue.

Although our expedition did not go to Argentina I include below results primarily from Chris Alexander, who would have gone had our tour proceeded, but he went with another group. His site was located at Fortin Nogueira, Argentina with coordinates 39° 57′ 37.08″ S     69° 59′ 27.56″ W. Total Eclipse Duration 2m05.2s .  This would have been half way between our planned east coast site at Las Grutas and the remote sites northeast of Bariloche.  He had to contend with high winds gusting beyond 40mph at times which meant that exposures longer than 0.5 second of the corona were impacted significantly.  Exposures shown below were short. 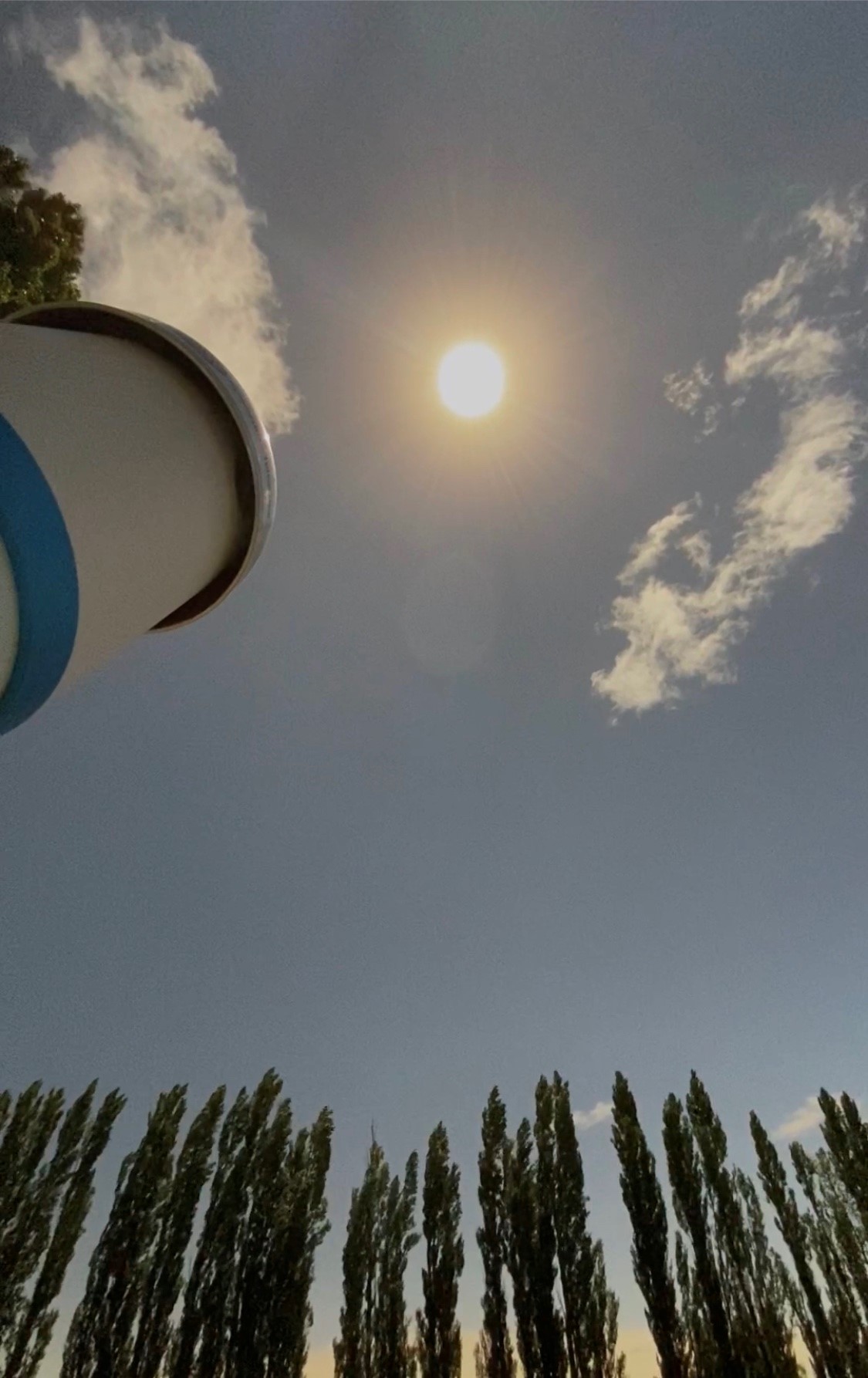 Before totality an Iphone mounted on the side of the telescope was used to record a movie of the eclipse. This is a single image before the total phase. Chris Alexander photo. 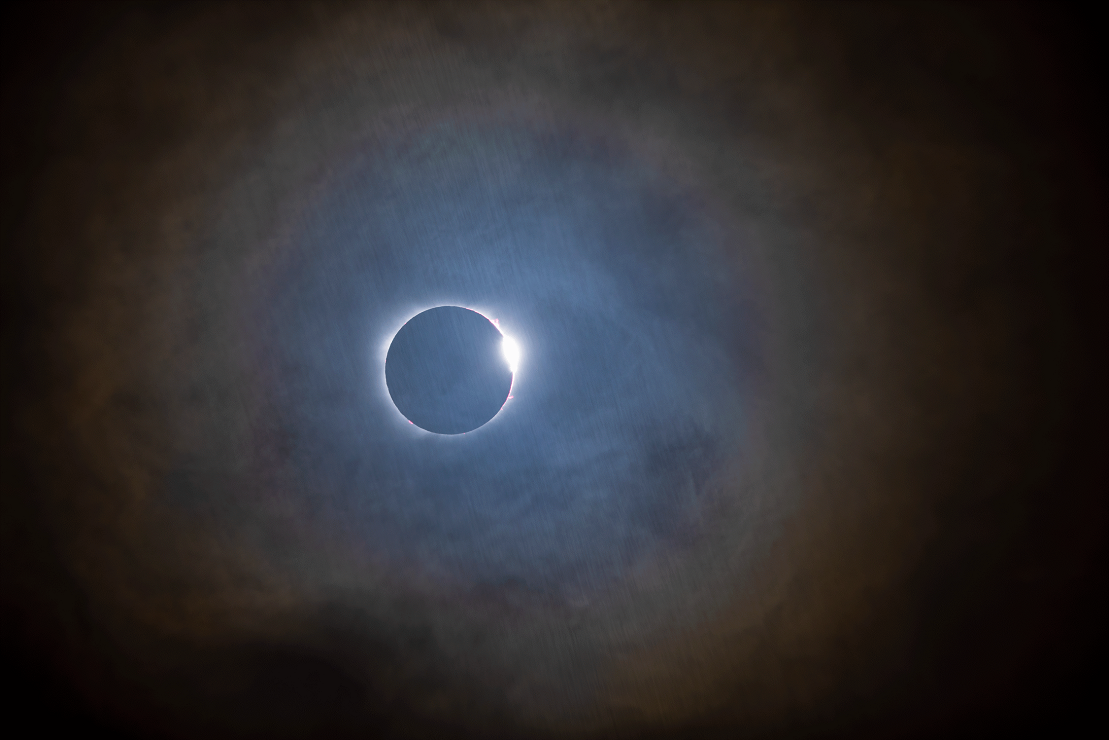 Something unusual occurred at 2nd contact (beginning of the total eclipse). A concentric rainbow appeared in the thin cloud above the observing site as shown above. Chris Alexander photo. 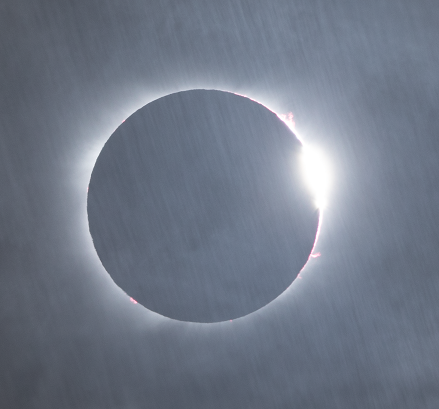 The first image shows parallel striations which appear to be shadow bands in the air. You can also see two large prominences at 2 o’clock and 3:30 positions. The diamond ring is quite obvious at 2nd contact. Chris Alexander photo. 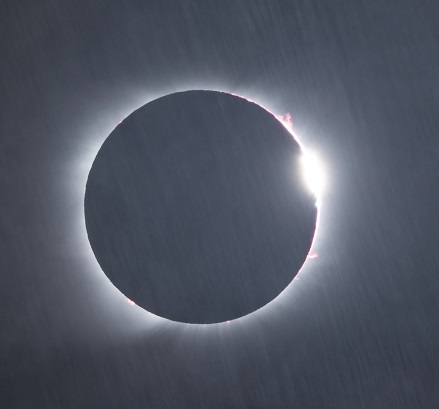 The image above was taken moments after with the background getting darker. Shadow bands remain visible. Chris Alexander photo. 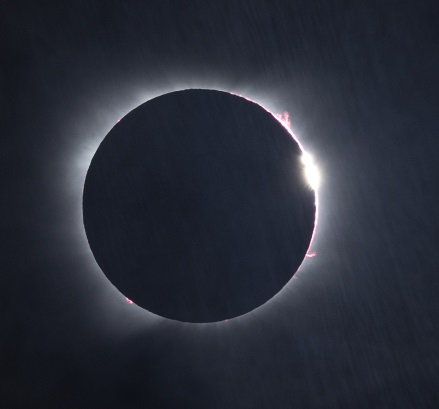 The 3rd image shows that the shadow bands have disappeared and the inner corona becomes visible. The pink area from the 1 o’clock to 2′ oclock region is chromosphere. The diamond ring has morphed into two large Baily’s Beads. A more distinct prominence is noticed at the 7:30 position. Chris Alexander photo. 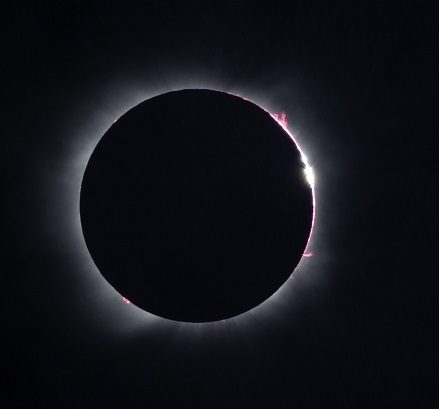 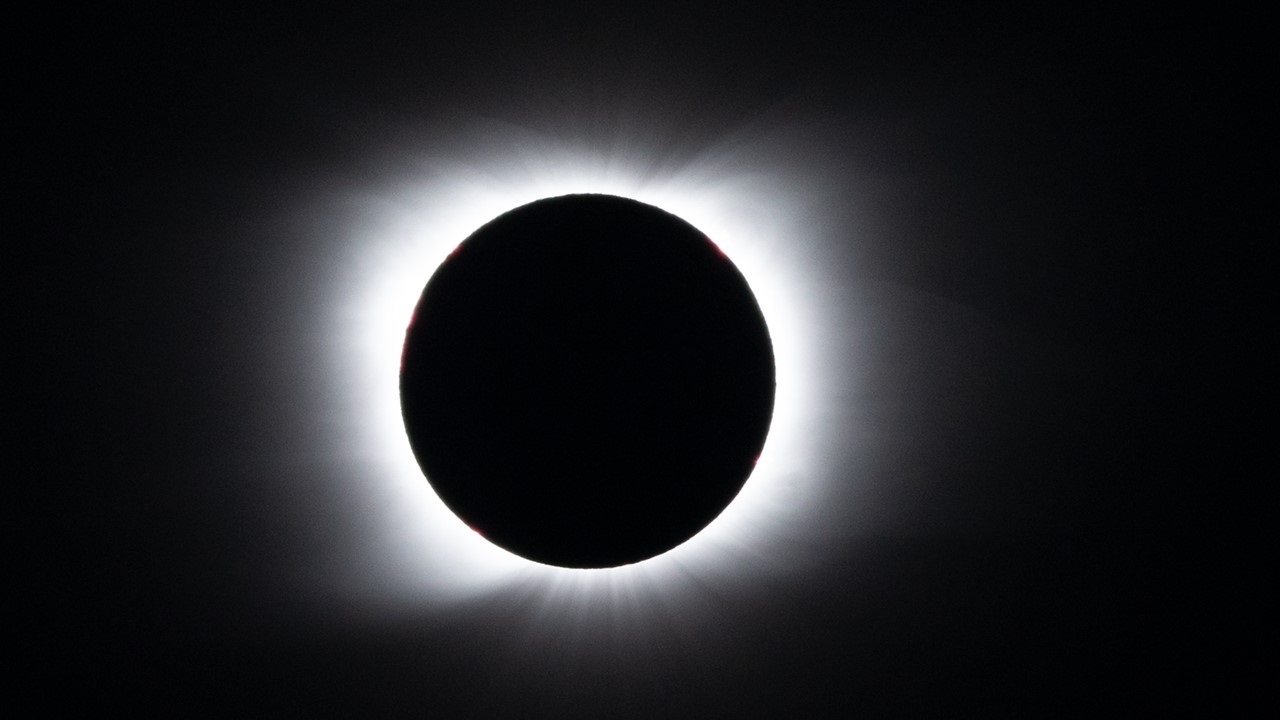 But how did the actual corona compare to that which was predicted. In the image below you can see a screen grab from a video posted on YouTube by Leticia Ferrer, who has also traveled with ROFE in the past.  She reported winds gusting to 50mph/80kph at their location during totality. This was Leticia’s 18th total solar eclipse.

You can see her complete video at https://www.youtube.com/watch?v=aKivWHgf_Qg&feature=youtu.be    The screen grab is shown next to the modeled corona (hopefully with the same alignment) as provided by Predictive Sciences Inc.

Totality as captured by Leticia Ferrer at the same location as Chris Alexander (left).  This is from video as the true extent of the coronal streamers are not as obvious as with an overexposed still image.  The solar corona as modeled by Predictive Sciences Inc. is shown on the right. 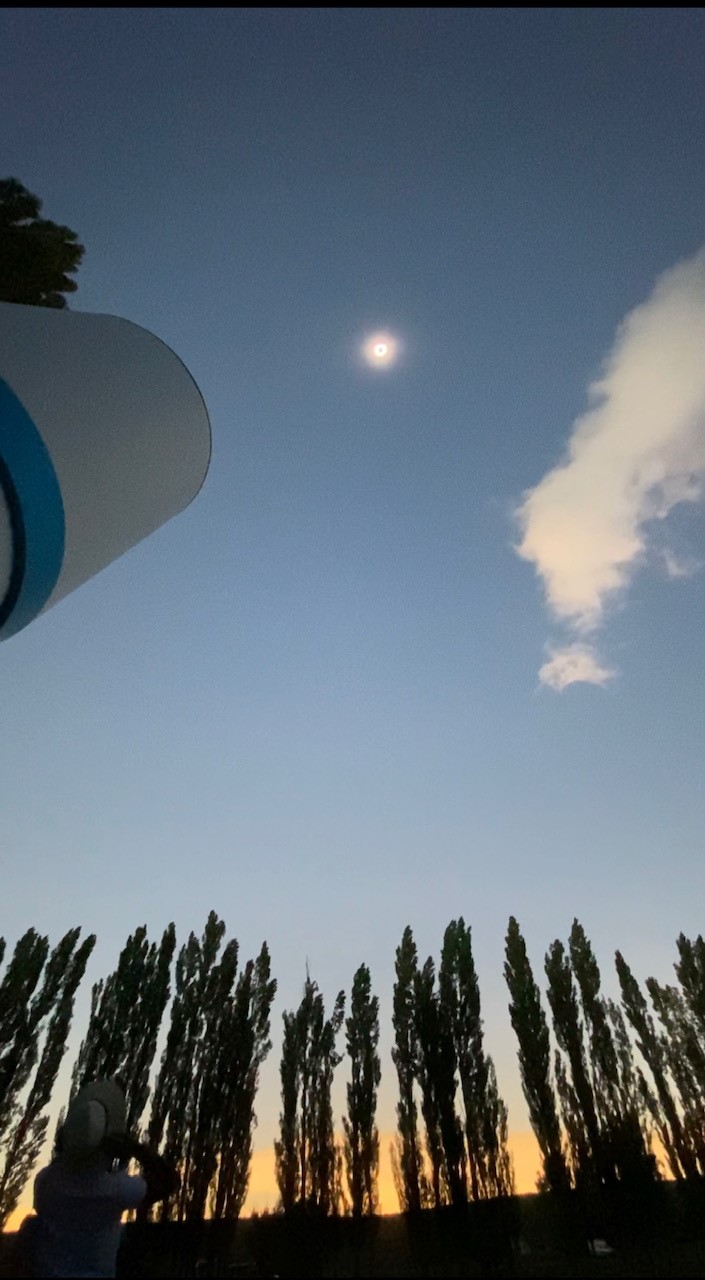 On rare occasion a ‘bright’ comet appears close to the Sun. In this case it was discovered by the Large Angle and Spectrometric COronagraph (LASCO) camera on December 13 and was accidentally captured by stacking images during totality.  This instrument is situated on the Solar and Heliospheric Observatory (SOHO) satellite and is equipped with a disc to block the brilliant light of the Sun.  During the eclipse it would not have been possible to see it since the comet was not all that bright.  At the time this photo was taken it was perhaps 7th magnitude. Comets have been seen at least 6 times before during eclipses in the last 2000 years, the first one apparently being in the year 418AD and the most recent one in 2006 — Comet C/2008 O1 (SOHO). 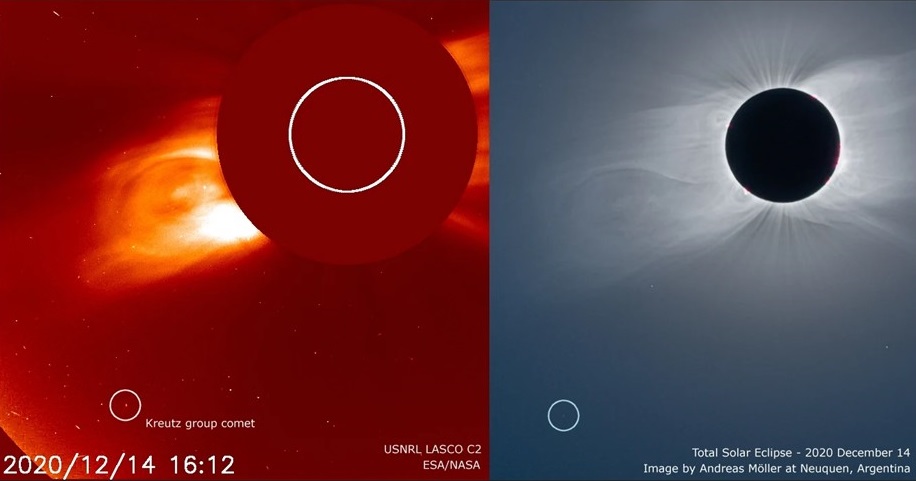