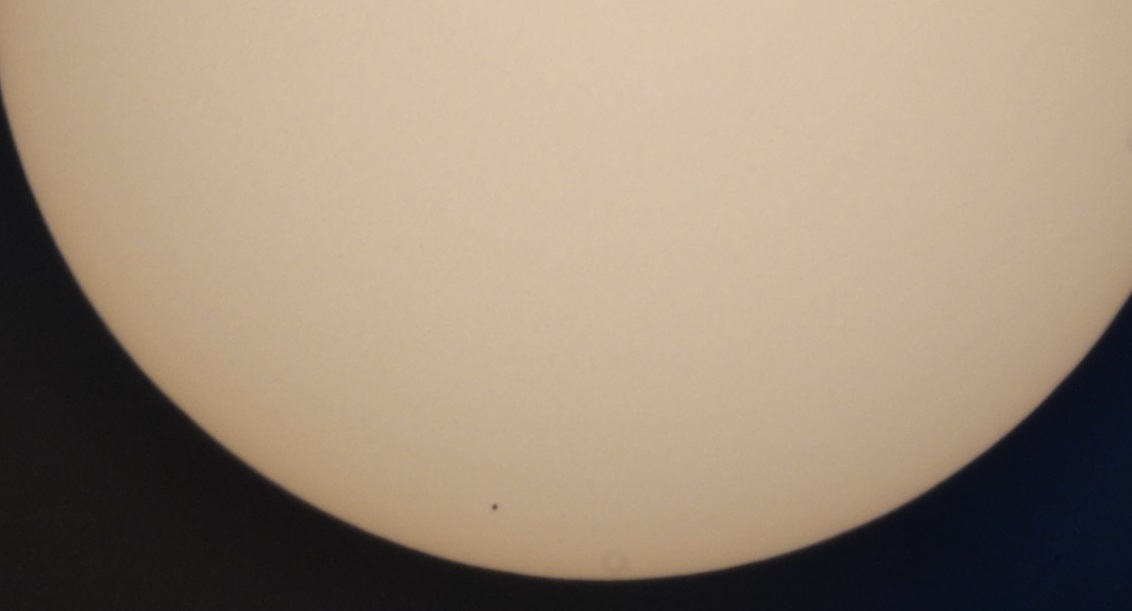 Mercury, the small black dot, as it begins to transit the face of the Sun on November 11, 2019 as seen from Fernando de Noronha. This is one of a number of successful images (this one taken about 11am local time) that I was able to take.  Paul D. Maley photo.

My first attempt to observe a transit of Mercury was May 9, 1970; some others I observed occurred on November 10, 1973; November 15, 1993; November 15, 1999; May 7, 2003; November 8, 2006; and May 9, 2016.  Though the planet Mercury is quite distant from the Earth, only it and Venus come between the Earth and Sun and offer the rare opportunities to view them in this manner. Since 2019 was the last year until 2032 when Mercury made such a journey from our point of view, I chose this time to visit my 295th country (the island of Fernando de Noronha) located in the Atlantic Ocean just northeast of Brazil.  There were a number of reasons not to create a group trip for this: 1) because Mercury covers less than 1/200 of the Sun’s face and was not really dramatic enough; 2) the transit was visible in the US; 3) all of the places to stay had only a few rooms; 4) air travel involved at least four flights each way.

[Postscript: It took us flights from Phoenix to Chicago to Sao Paulo to Recife and finally to Fernando de Noronha to reach our destination during a time when weather along the route is known to be good.  Of the 8 flights in total, the most critical one was the 1 hour 25 minute connection from Sao Paulo to Houston on November 13 that ended up putting us almost in jeopardy.  That flight departed late.  With a great deal of luck, we were able to arrive at terminal 1 of Sao Paulo airport, board the inter-terminal bus with a stop at terminal 2, then to terminal 3; we were able to get through security and passport control, with our target get at the farthest possible distance from the front of the terminal with just minutes to spare prior to United flight 63 closing its doors.  We began our travel November 8 and returned November 13 spending less than 24 hours on the island.] 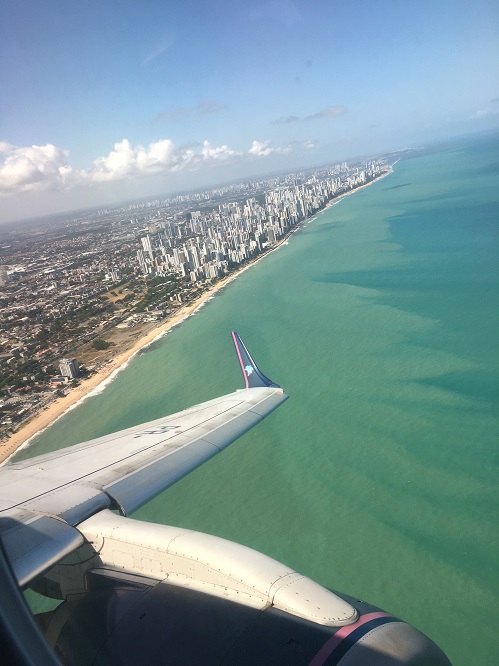 Recife, Brazil from the air on a beautiful day. All photos by Lynn Palmer unless otherwise noted. 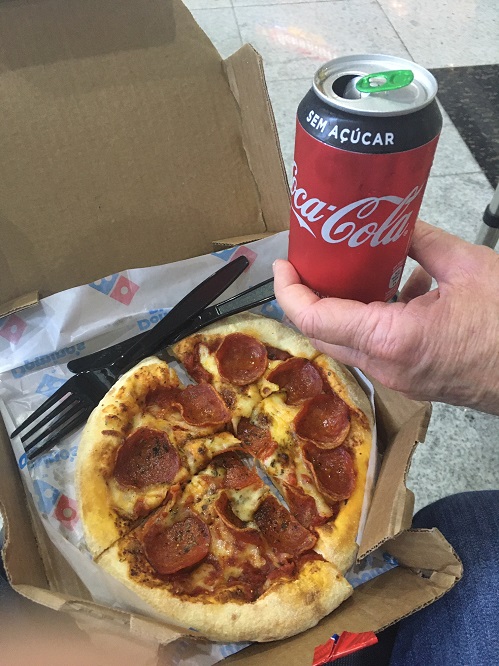 Our very small Domino’s Pizza and regular expedition staple Coke Zero in the Recife airport while waiting for our flight to Fernando de Noronha. This cost about US$6. 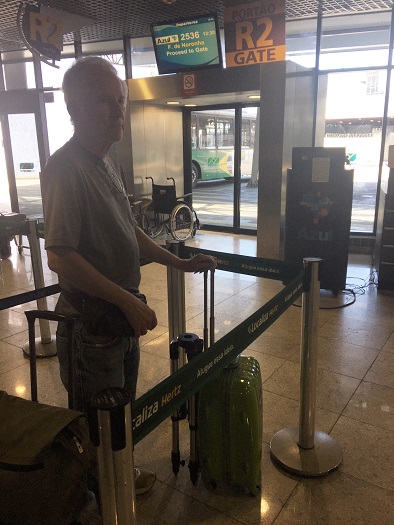 Waiting at the front of the ‘amateur astronomers only line’ to board the 65 minute flight to Fernando de Noronha. 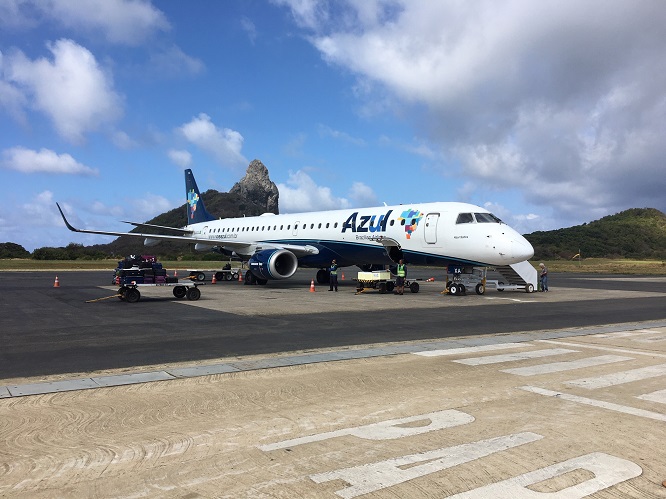 Embraer 195 jet. Considering the Embraer planes that United Airlines buys where you cannot put many commonly carried bags into the overhead, this plane is fantastic. Either 2 x 2 or 3 x 3 seating, there is no problem carrying astronomical gear onboard.  Nice comfortable seats, inflight movie screens in the seats with a large choice of movies. The only problems we experienced involved constantly barking dogs allowed in the cabin and women being allowed to change baby diapers on the seats in front of us (instead of in bathrooms)—not a pleasant experience! Snacks onboard were not very good and there is no food for purchase. 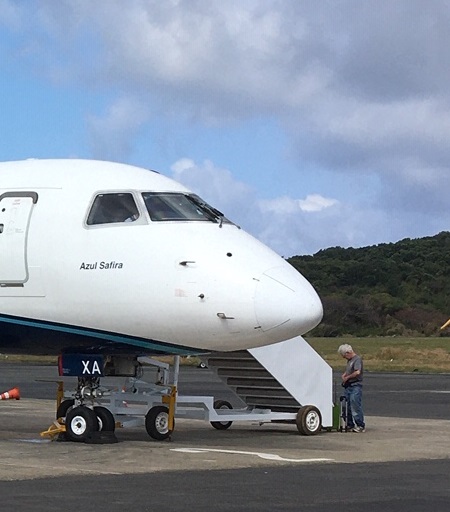 Because of the Mercury transit I was the first person to board the Azul Air flight to Fernando de Noronha. 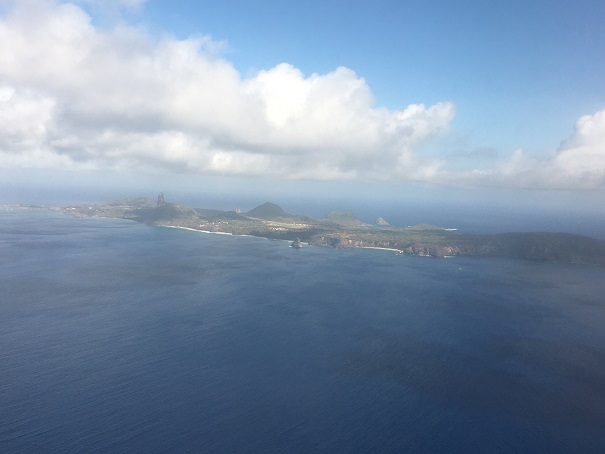 The approach to the island. 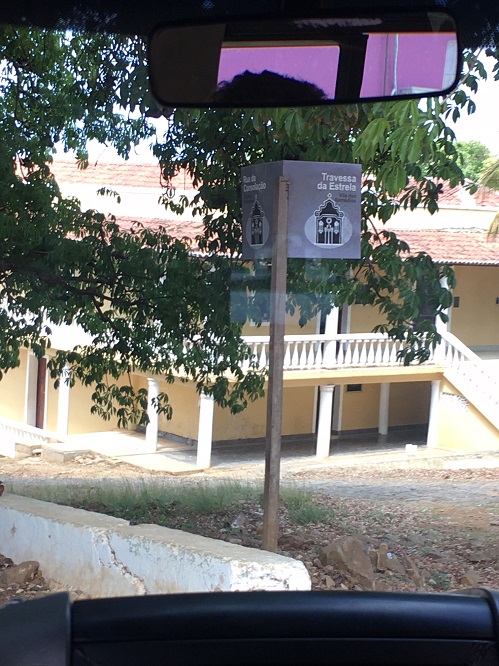 The only astronomical sign we saw as we were transported to our bed and breakfast. The marker is called “Star dish” in English and it is not clear about its significance. 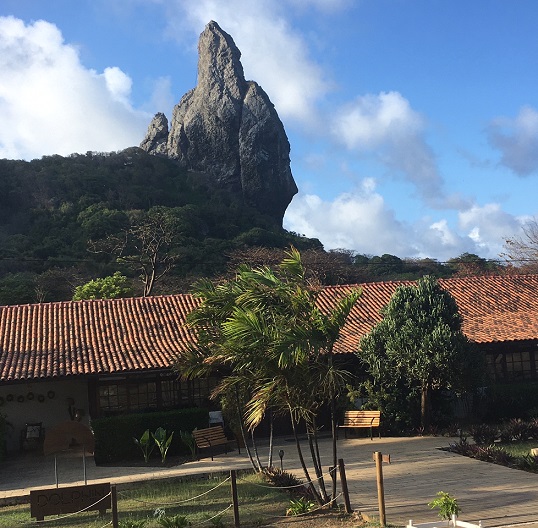 Unusual outcroppings or the start of Godzilla’s arm reaching out from under the Earth?

A really beautiful beach close to the airport. 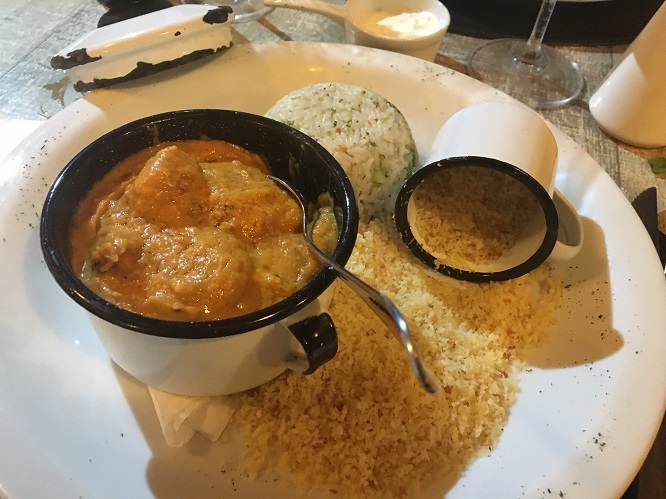 Not speaking Portuguese (but we used Google Translator), we had no idea where to eat dinner the night before the transit. The hotel manager suggested a place a few blocks away that they said was fantastic. They were right. This was likely the best meal we ever ate!  One dish above is shrimp and rice. 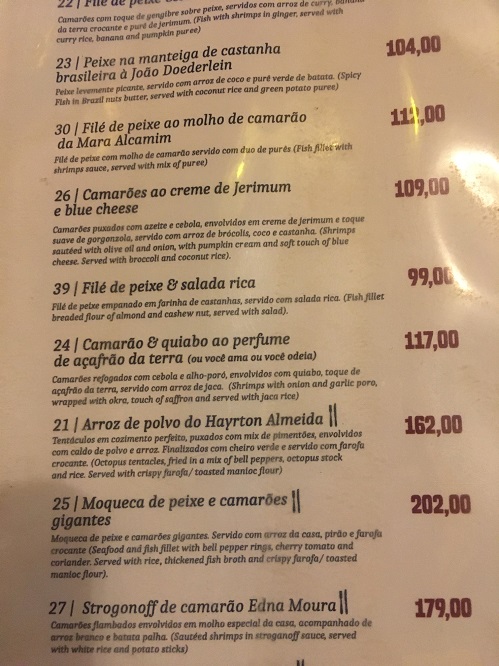 The dinner menu contained English as well as Portugues; priced in Reals (3.4 Reals to 1USD). The island is a very expensive place as virtually everything has to be imported from the Brazil mainland.  Every item was at least US $30. 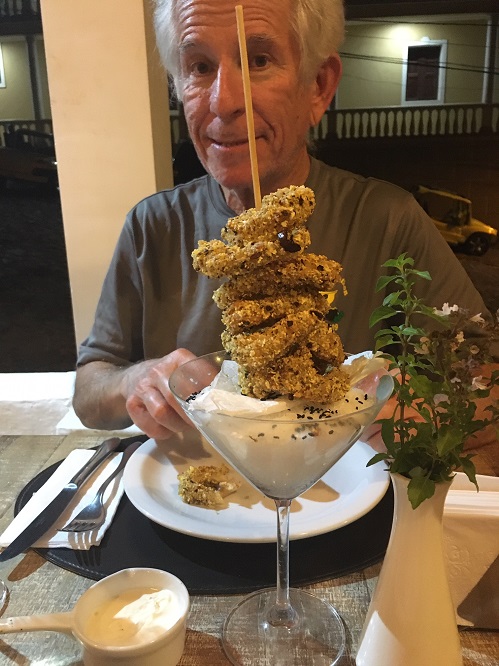 An unbelievable tasty gourmet dish of octopus tentacles. A wonderful experience entirely unexpected the night before the transit! 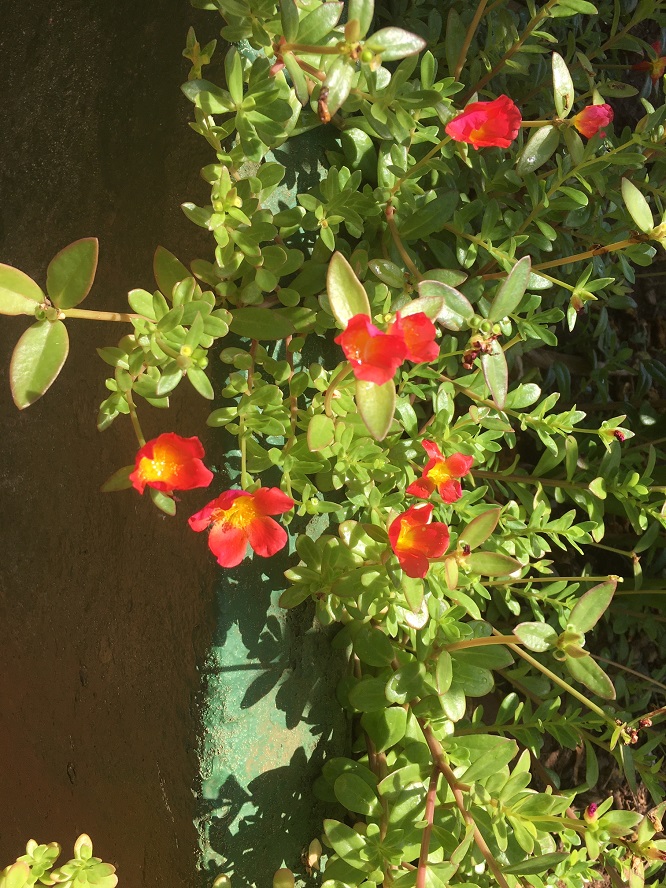 Colorful flowers at our hotel. 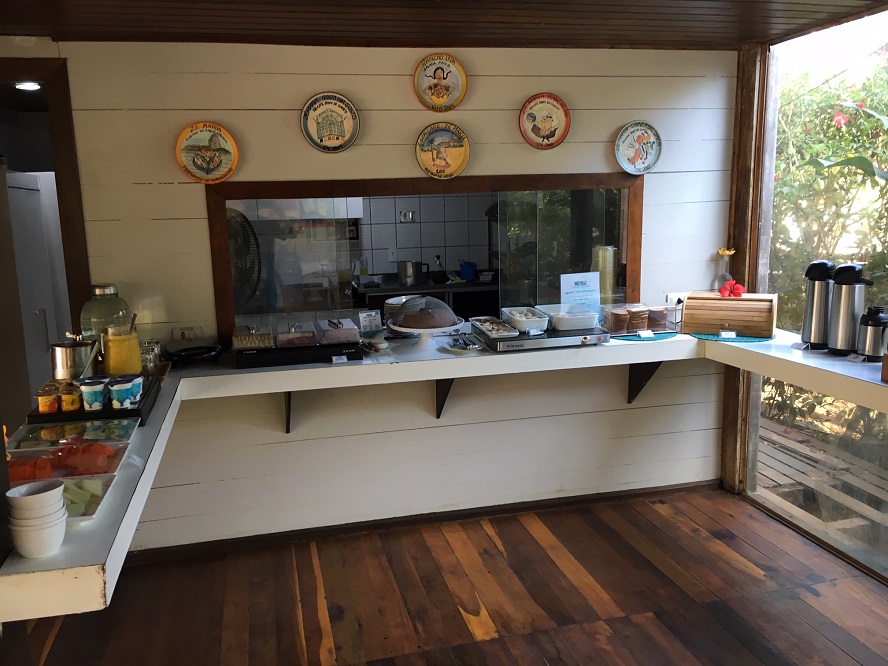 Our bed and breakfast was called Pousada Sympatia da Illha. Here is the breakfast area. 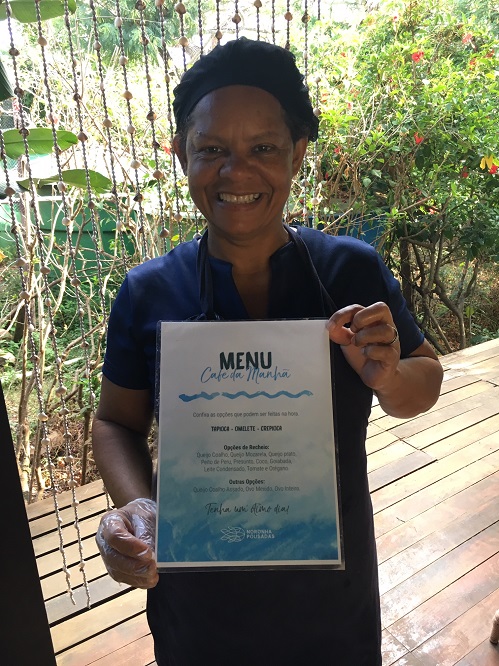 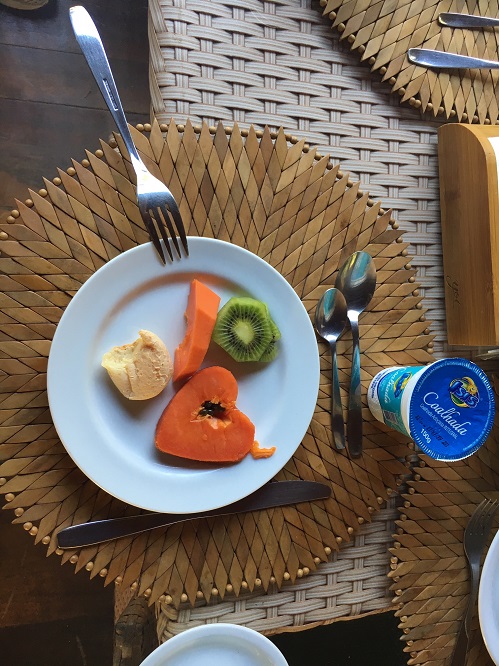 Fabulous papaya and kiwi fruit (in addition to cooked to order omelets and other accoutrements). 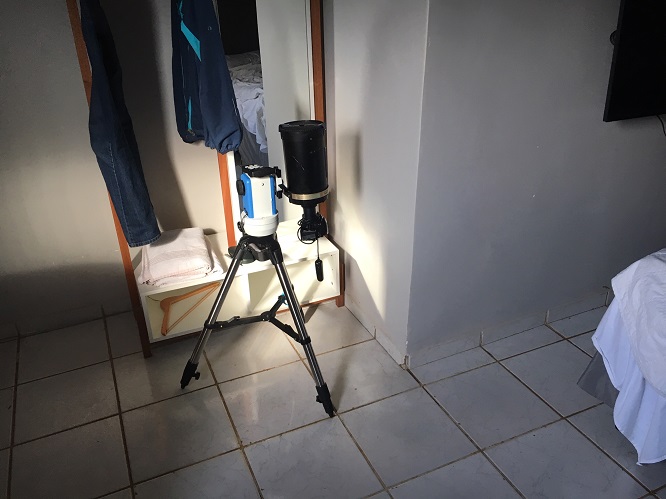 Proper preparation meant setting up the equipment in a room without air  conditioning to avoid undesirable condensation. Here the scope is set up in the rather small room an hour before the start of the transit.  The room was ok except that there was only one bathroom faucet. After sunrise water came out at one temperature: scalding. Taking a shower was not a trivial experience and had to be done at night.  Our room was nearest to the street so we could hear some noise off and on during the night. 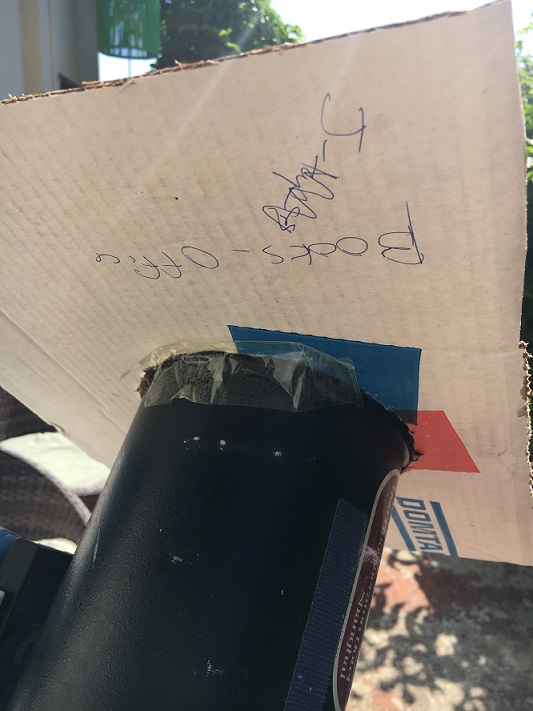 One trick needed to block the Sun is to attach a cardboard Sun shield in front of the optics prior to the start of solar observation. It was precut from an old cardboard box in Arizona and set to fit inside my rolling bag. It was secured in place from the 20 mph winds by tape on two sides. The objective is an old 1250mm Celestron 5 telephoto lens first used at the total solar eclipse in Peru in 1994.  The above Sun shield is not pretty, but it is very effective. 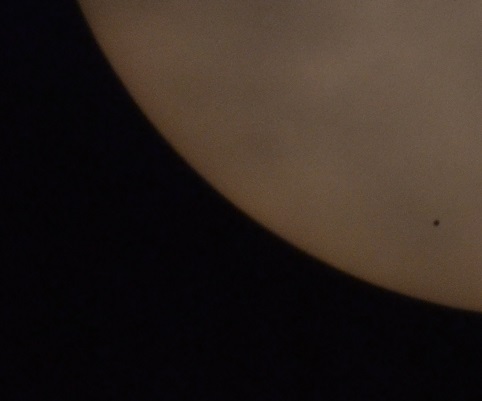 The wind brought in passing cloud which actually helped to define Mercury better by its contrast.  Even at high elevation the seeing was not fantastic and magnifying the image even more would be blurry. 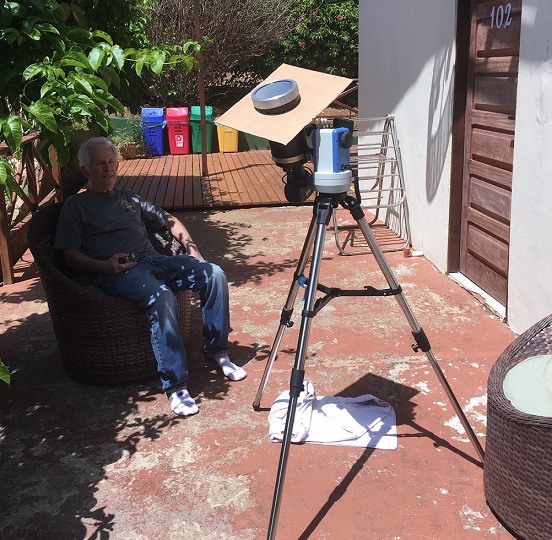 Since the transit lasts many hours, it is good to use the shade of grapevines to keep the Sun’s rays at bay. Here you see the kneeling towel used to minimize contact with the concrete floor. The mount is an IOptron Cube E with Thousand Oaks ND5 solar filter and Nikon D3100 camera. Set up was located in front of our room #102 with building structure blocking most of the wind effects.  Unfortunately I no longer had a right angle focuser for the Nikon and had to peer straight through the lens at a high angle. 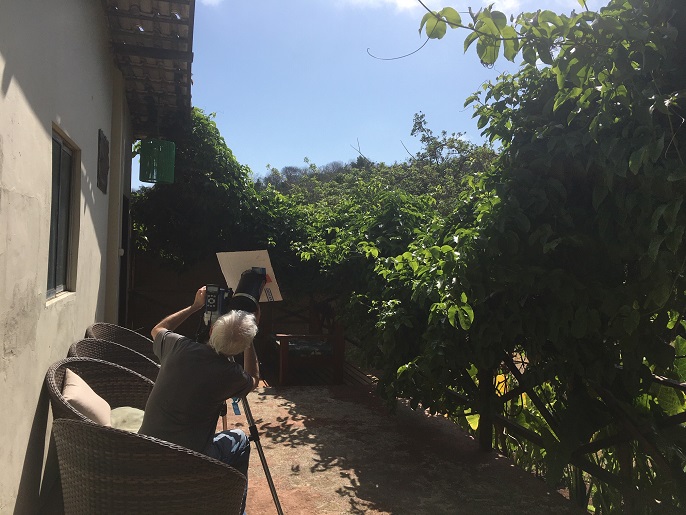 At times it was possible to use a comfortable chair instead of kneeling but the altitude of the Sun was above 60 degrees nearly the entire time. So this was a neck ache in the making. 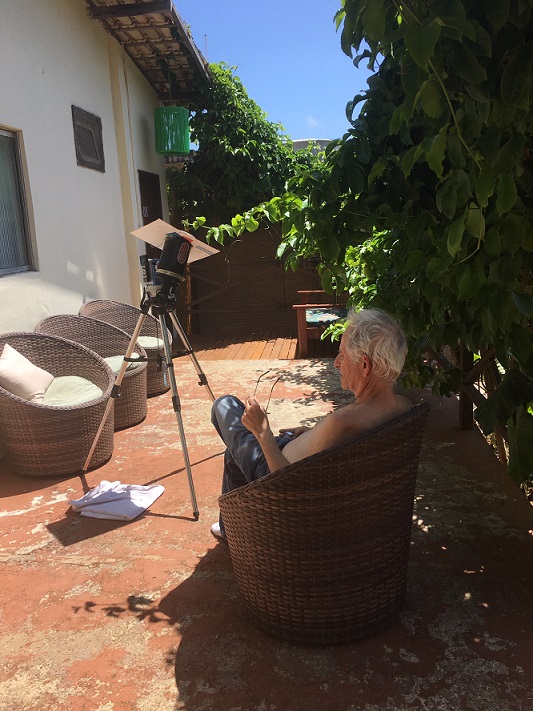 At times the temperature became quite hot and waiting is just part of the experience.  The chair made it much easier.  Note the clear sky in background and strong shadows. 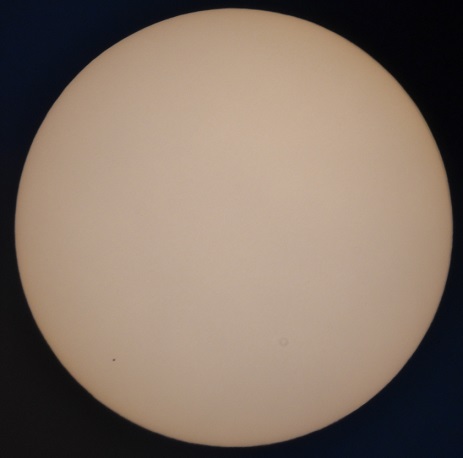 This image served mainly as a precursor test image prior to using the same gear during the upcoming December 26 annular solar eclipse in India. Mercury is the small dot in the lower left while there are some dust specs and artifacts distributed elsewhere in the above photo. Image scale proved sufficient for getting the entire Sun in the field of a 35mm partial frame camera. However, difficulty getting the mount to properly track meant that it had to be periodically corrected in order to keep the Sun in the center of the field of view.  Testing is always important and this location was just 3 degrees below the equator. It was the first time to use it in the southern hemisphere.