If ever there were long odds against seeing an eclipse, this was the one. Iceland is a notorious cloud magnet and that was our destination. Iceland, the exotic Faroe Islands, and the largest island on earth—Greenland were all part of our ambitious eclipse itinerary.The map below shows the three countries and the relative distances between them. 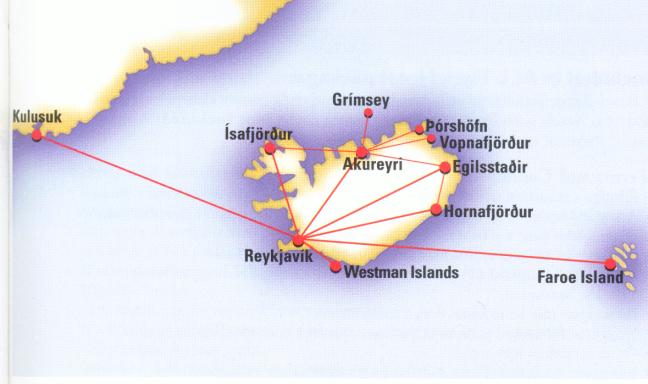 We arrived into Reykjavik, the capital of Iceland under completely clear skies. That was the first indication that something abnormal was happening. Our stay there was very short, just enough to experience this rare May sky and then jet to the east where the next three days were spent in the Faroe Islands. These places and Greenland would all experience the annular eclipse on May 31. Because of the proximity of Iceland to the Arctic Circle, we would experience essentially no dark sky. With 22 hours of official daylight, the sun only dipped to -3.5 degrees below our horizon at ‘night’.

The Faroes are a remarkable cluster of islands and due to a strike by union employees, bus transport and food delivery and availability were impacted. No fresh produce was available and many restaurants were closed. The weather was generally overcast and rainy as advertised but the highlight of the Faroes was the remarkable Vestmanna Bird Cliffs, home to thousands of sea birds. This motor boat trip must be seen to be believed. Approaching cliffs 600 to 800 meters high shrouded partly in cloud seemed like a scene from a movie (such as JURASSIC PARK). Photos could hardly do justice to it. The cliffs are also populated by semi sure-footed sheep and lambs—lots of lambs. May was the end of lambing season. 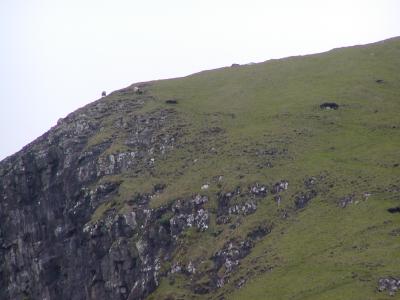 Sheep on the hairy edge by Lynn Palmer
One quote was that 1 of every 4 sheep fell to their deaths from these sheer heights. Rain kept away as our motor craft hugged the coast and entered dark and mysterious corridors from which the calls of birds could be heard and guano droppings plummeted from the air such that all passengers were required to wear hard hats just in case of an impact. 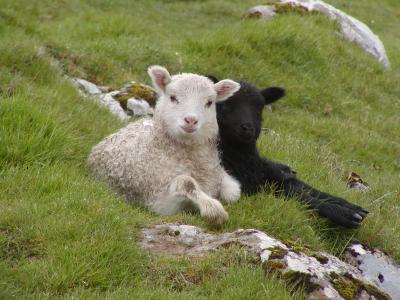 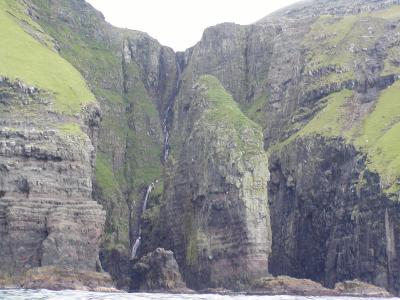 Can you believe that sheep are actually grazing along these cliffs, by Lynn Palmer 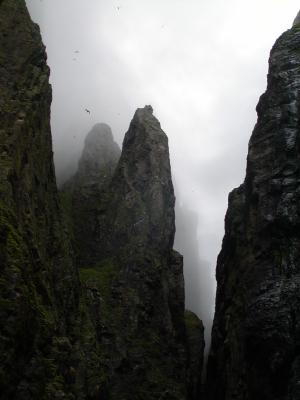 The towering cliffs at Vestmanna, by Lynn Palmer
Returning to Iceland we spent the rest of the trip here with the exception of a day tour to Greenland. Wow! How cool was that. A nearly cloudless day, smooth air and no delays. This was followed up by a surprise flightseeing around the fjords and mountains of Greenland in the vicinity of Kulusuk. 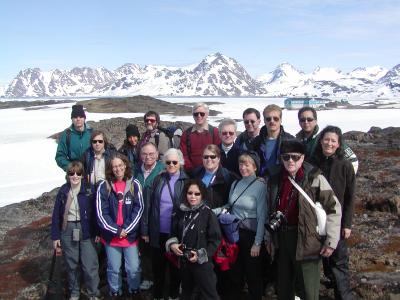 Group photo by Paul Maley, which is why I am not in the picture. 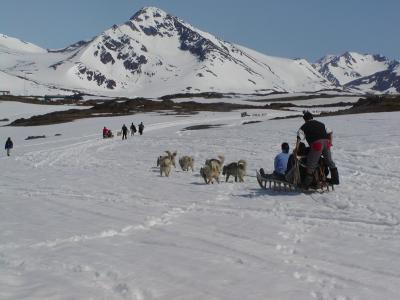 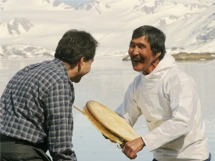 Ruben and the Greenlander in a faceoff by Howard Bruensteiner

While some of the group elected to take the easy route back via dog sled, some of us chose to hike the nearly 2 miles back through the snow. It was tought but memorable as was the drum dance provided by a native Greenlander. 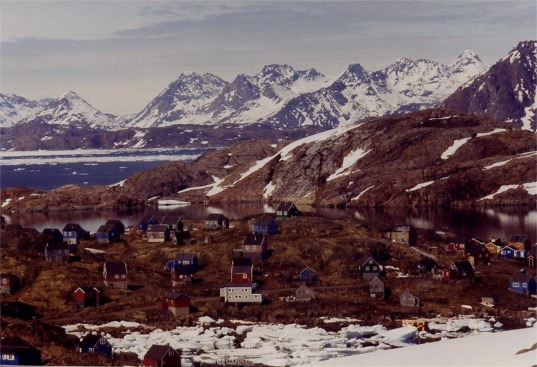 Kulusuk village by Richard Nugent
Iceland itself is a geological wonderland. Not an exaggeration—its a fact. Space does not permit showing all the photos. However, this one of the Strokkur geysir (the original Geysir for which the class is named is found just meters away but is nearly tapped out!) is shown in eruption which occurred 1 to 4 to 8 minutes apart depending on how you timed it. 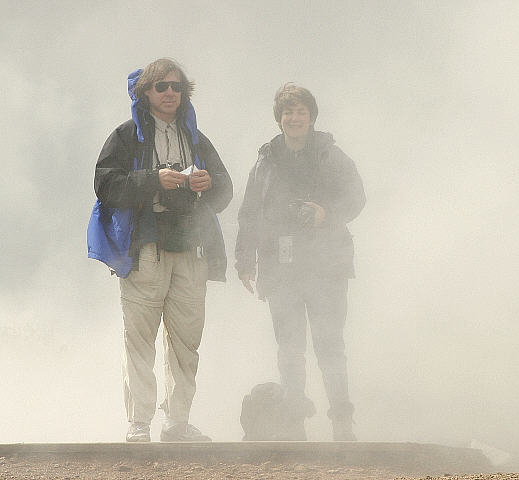 Matt and Debbie in the steam from Strokkur geysir, by Howard Bruensteiner 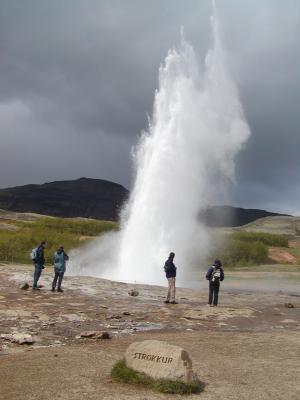 The Strokkur Geysir erupts with Lynn a few feet away, by Paul Maley
Another neat feature was a visit to the 18-inch telescope at Seltjarjarnes, the biggest instrument in all of Iceland. 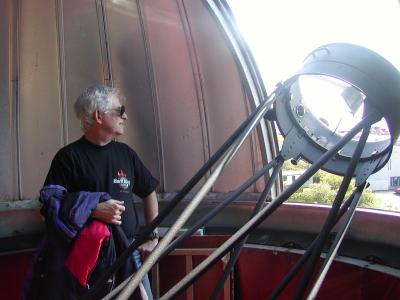 Inside the dome looking east, by Lynn Palmer
Now for the eclipse story. On E-day minus one we saw the weather forecast and it was a grim one. Nice bright sunny days were to give way to a complete overcast condition over all of Iceland. We were positioned that day at Myvatn in the north central part of the country. This was the first time we had allocated independent travel means to all participants. Two persons to a car, each team would have the chance to travel where and when they liked. Per the last weather forecast, prospects were given to be 10-30% of seeing the eclipse near Myvatn, 20% in the northwest fjords area and 50% in the north central portion. It was 0% elsewhere with rain predicted to cover the southern half. In fact it would be far worse than this. 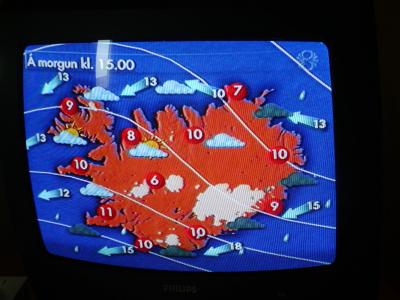 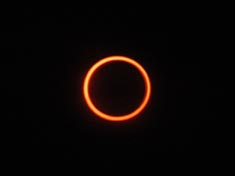 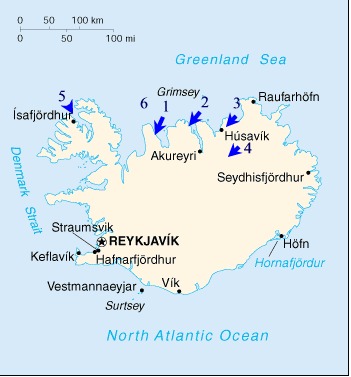 Leading the main group I stopped at Akureyri where it was obvious that the sky was gradually being lost the farther west we went from Myvatn. Taking some time to watch cloud movements, the cloud motion was west to east at high levels and barely a south to north motion. I led the group north along the east coast of the Trollaskagi penninsula. At the northern tip just before a tunnel leading to Olafsfjordur, I recommended the group remain on a bluff overlooking the fjord. At the mouth of the tunnel some 10 amateur astronomers had parked in the small lot next to the entrance and among them was Timo Karhula of Sweden. He reports that at eclipse time according to the newspaper Morgunbladid there were 4,000 spectators. Lynn and I drove through the tunnel hoping to increase overall chances of at least someone observing the eclipse by heading farther west. However, the moment we left the 3 km long tunnel we had a clear view of the west and it was solid cloud cover. Even though we were not far from the main group, the tunnel was essentially one way temporarily and it was difficult to return because of cars moving form east to west. A nice site overlooking the fjord was found at the west entrance to the tunnel and we stopped our car there. The temperature hovered in the low 40’s. We watched as the sun went down at 11:51pm and then rose at 2:37 am. I had calculated that a -6.7 magnitude Iridium flare would occur during central eclipse from a narrow georgraphical window. However, the cloud cover thwarted my plans to photograph the flare during annularity.

As we watched and waited, the clouds slowly crept eastward but still there was a small lateral gap allowing us to watch the sun nearly continually. 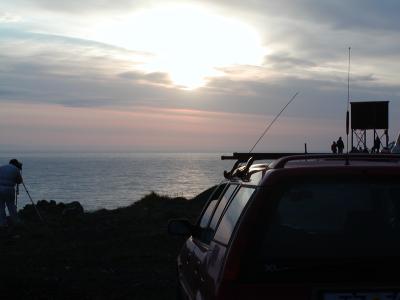 A view of the the fjord from the west side of the Olafsjordur tunnel, by Lynn Palmer 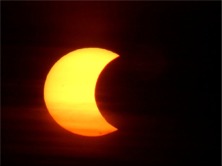 The clearest moment occurred during the partial phase. Note sunspots, by Howard Bruensteiner. Howard used a Canon 10D. But for the broader views of the sun were with a 70-200 f2.8 Canon zoom lens. He added a Canon 2X teleconverter for the closer views of the sun. No filter was used for any image due to the cloudcover.
As first contact approached at 3:07 UT (also 3:07am local time), local people from Akureyri began to drive up. A bus disgorged 30 walkers who set out for a steep climb two hundred feet above our heads. A policeman had stopped several times and led others to where we were set up. We then noticed he had his daughter in the front seat. Lynn noticed baskets on the ground in front of our car which were filled with spent shotgun shells. It seems that we set up at a shooting range. Other cars zoomed in and screeched to a halt. Students and their instructor from the University of Akureyri astrophsics class broke out binoculars and then compact discs and exposed film to use to watch the eclipse. I had never seen such a display of unsafe materials. Where could they have gotten their eclipse viewing advice? Lynn made a point of jogging during the partial eclipse to try to extend her running abilities, in addition to having participated in a 10k race in Reykjavik 3 days before the eclipse. 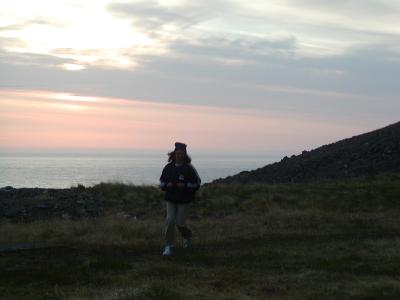 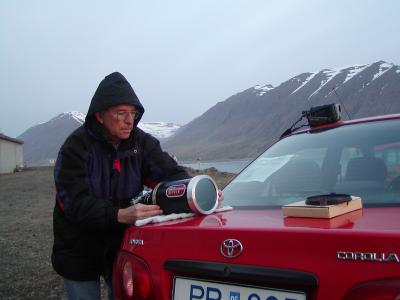 Paul using a towel to balance a C5 telephoto and Thousand Oaks Type II solar filter on the trunk of his rental car. Not the best combination but given the odds of seeing the eclipse…, by Lynn Palmer 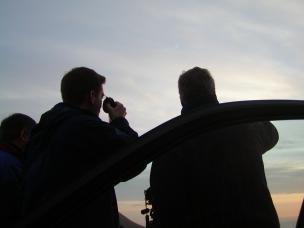 Danger! A spectator using a compact disc to view the sun by Lynn Palmer 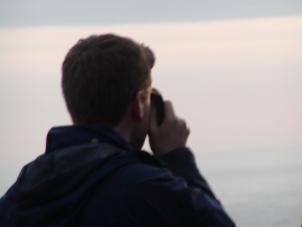 A dangerous use of exposed film, by Lynn Palmer
I had set up my Celestron 5 telephoto with ASA400 film and Olympus camera back; also a camcorder (see photo above). Since the sun was essentially near the horizon the whole time, the equipment was pointed horizontally. The university students and their instructor would periodically watch the eclipse and wander about between my camera and the sun, unaware of what they were doing. There was a 5 minute period where the partially eclipsed sun was completely unobscured by any clouds whatsoever. Three sailboats could be seen below us in the fjord no doubt with eclipse viewers on board pointed east but not moving.

At 3:52 the sun was blocked completely. But at 3:59 it was beginning to remerge! I switched between an ND5 filter and variable grade of mylar. As central eclipse approached there was always a thin cloud covering part of the annulus but in this digital photo from Howard Bruensteiner you can get a good idea of what we saw. 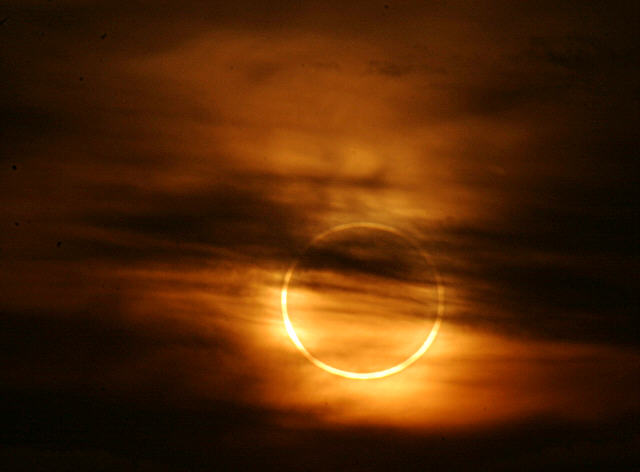 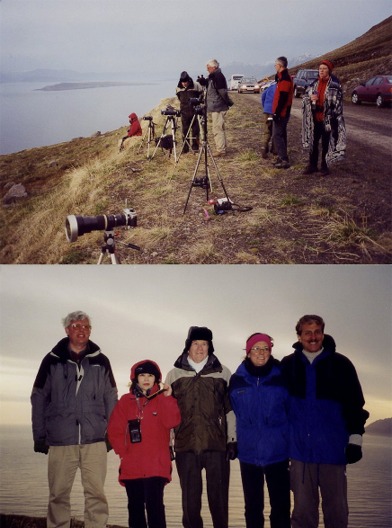 The site on the east side of Olafsfjordur with David, Emiko, Dick (Mischke), Maryann and Richard; by Richard Nugent 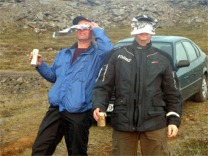 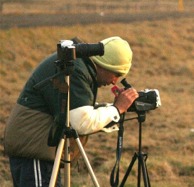 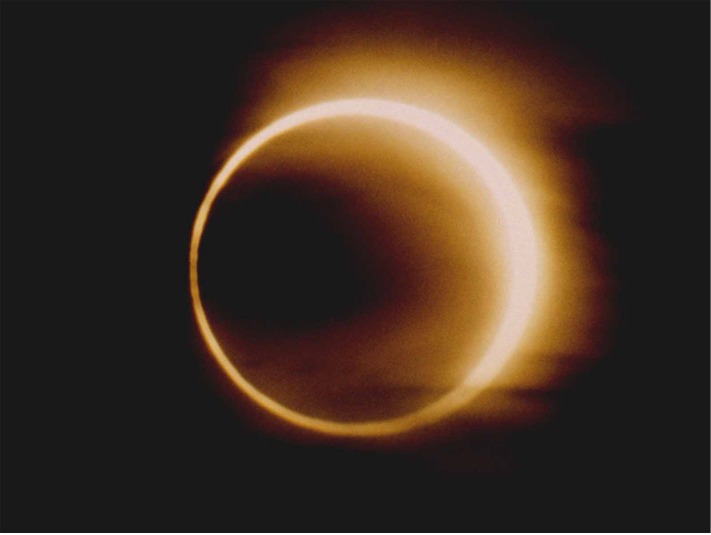 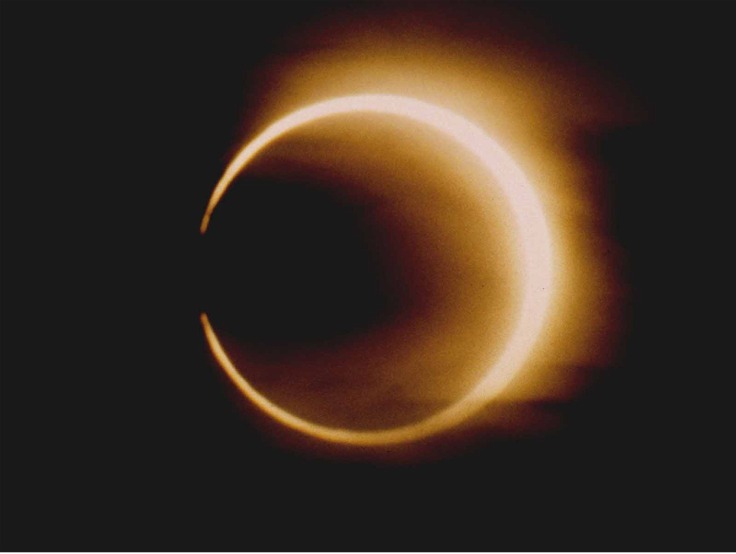 Here a couple of the beads are just showing, David Callender 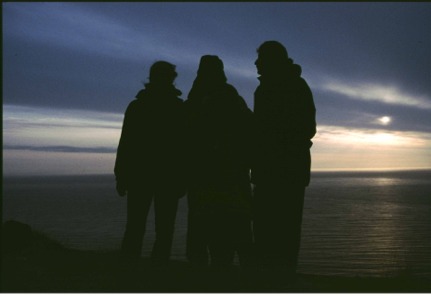 After annularity on the east side of the tunnel—it looked grim! Yes, Emiko is also somewhere in this photo, by David Callender
In David’s shots, note that Camera: Canon A1 using Kodak Elitechrome 400 ASA slide film, underdeveloped to give an effective speed of 200 ASA Shutter speed: 1/1000th sec; Lens: Sigma 400 mm at f22 with 2x convertor (effectively 800 mm at f45 – f50); Filter: None – the cloud cover and low elevation combined to make using an ND5 filter impractical. Note that since no filter was used, the lens was physically stopped down to reduce the light intensity and avoid damage to the camera metering system (not all cameras / lenses allow you to do this). Framing the shot was carried out using a co-aligned video camera so that he did not have to look through the camera viewfinder at any time. 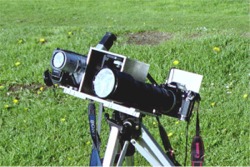 David’s convenient side by side setup

We were really lucky. We drove as far north as we could go without getting to the island of Grimsey which is on the Arctice Circle. Given the tight return flight connection, we packed up and left shortly after 3rd contact and began the nearly 7 hour trip back. The sky clouded over after 3rd contact, and almost all the other spectators also left about the same time. It would have taken us less time to reach Reykjavik, but we had to pull over to sleep for an hour since neither Lynn nor I had any rest in the previous 24-hours. We saw the stream of cars, usually endless at normal eclipses but subdued because it was an annular eclipse and not a total one. This eclipse was unusual since there had been virtually no publicity about it. Everyone I asked in all three countries responded with “what eclipse?” when asked about it. 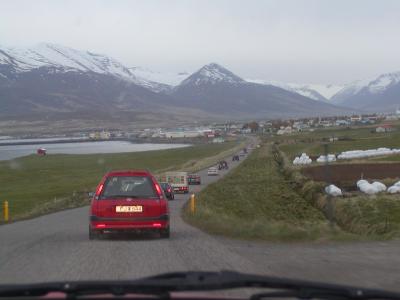 Driving back to Akureyri looking to the west. Solid overcast! Lynn Palmer shows her ability to drive and photograph at the same time.

Were we lucky or what? A look back to the east, by Chris Triessl
Most of the group except the four who remained for extra time in Iceland convened at Keflavik airport and swapped stories. Tired but happy, the trip was terrific not for only the eclipse and its tense moments, but also for the beautiful scenery and generally good weather. I wish to thank Snaevarr Gundmundsson for having helped us with logistical information, the Seltjarjarnes Astronomical Society for hosting us at their observatory, and most importantly, Susan Landon for giving the group motivational and informative presentations on the history and geology of Iceland.