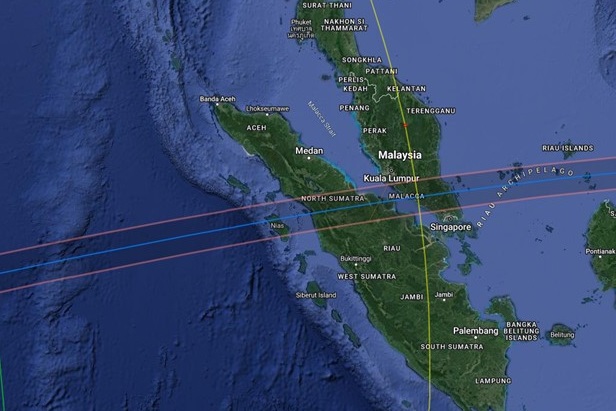 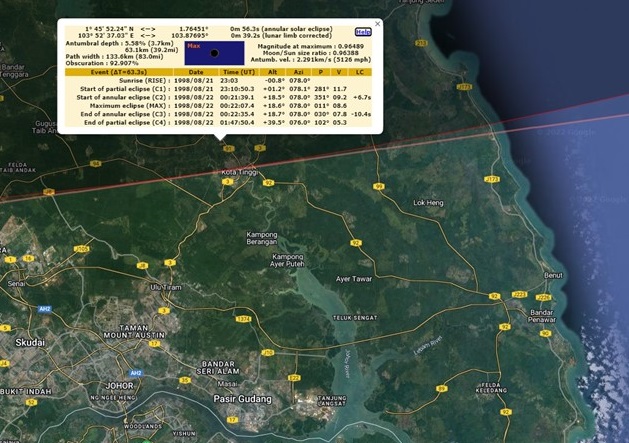 This RING OF FIRE EXPEDITIONS annular solar eclipse adventure of the NASA Johnson Space Center Astronomical Society observed the annular eclipse of the sun from two sites in Malaysia. Though I knew the weather prospects were not too promising, our primary task was to try to ensure that observations would be made at both eclipse limits in our continuing project to determine corrections to the solar radius. Two members (Derald and Denise Nye) flew to Vanutau, our original destination, to watch from the north edge of the eclipse path. But because no one else was planning to cover the south limit at the time, I changed our plans a couple of months earlier to complete the project goal. Lynn Palmer and I flew to Singapore on August 18. After 20 hours and 4 flights on United Airlines we arrived at 1am on August 20 to spend the next week at the Marriott Hotel in the middle of downtown Singapore. That afternoon I gave an invited lecture at the National Junior College on the eclipse process to about 40 students and teachers. The next morning we were ready to head for the eclipse site. We were picked up by our host Lee Wee Kiong, who runs a small scientific store in town. I had been in constant communication with him and others in the Malaysia Nature Society in preparation for the eclipse. Singapore was the gateway to the eclipse this time and it was only a 2 hour drive from our proposed observing location. We then collected Richard Nugent who had flown in the previous afternoon and traveled in two cars along with several other Singaporeans to small motel near the eastern side of Malaysia not far from the town of Kota Tinggi.

We passed through customs unimpeded even with all of our batteries, wires, and other hardware. The first thing we did upon arriving near Kota Tinggi was to conduct an impromptu site survey. I found that sites that Lee had surveyed on an earlier expedition using a Trimble Navigation GeoExplorer GPS receiver were too far north. The site also had horizon problems due to the expected low elevation of the sun at eclipse time. Unexpected difficulty with my GPS receiver resulted in two of three battery modes failing to work. However, after hooking it to a cigarette lighter plug, positional readings and navigation features activated properly. It took about four hours before more satisfactory sites could be located due to difficult terrain and few roads. 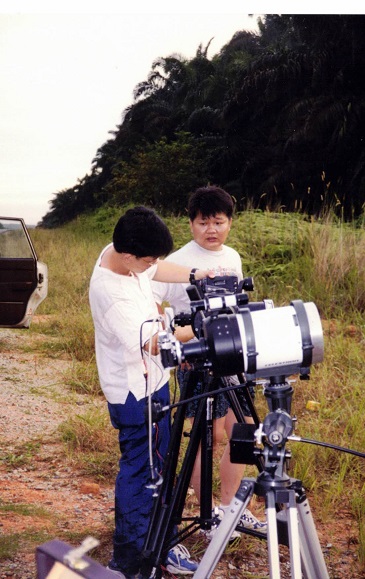 Local amateurs setting up their scopes near us.

On Friday evening August 21, we spent the night at the Mutiara Motor Lodge in little cabins on the beach which had primitive toilets, mosquitoes, and not much else. You know that things are a bit strange when your motel receipt states clearly that the motel used to be welding and spraying shop! August is normally a dry month, but this year due to El Nino the opposite was the case. It had rained every day, in some cases, the entire day in the two weeks preceding the eclipse. August 22, eclipse day, was finally here. We awoke to a thunderstorm off to our west and cloudy skies everywhere else. We drove off in a small convoy having been joined overnight by five Malaysian amateur astronomers. About 6:15am we arrived at our two sites situated at what was believed to be 0.0 and 0.4km south of the predicted southern edge of the eclipse path. We had planned to take video at both stations. Richard deployed his Meade 2045D telescope and I set up a Celestron 90. As the sun rose, the horizon was partially blocked by foliage but gradually we could spot the sun through minor breaks in the clouds. The maximum eclipse was predicted to occur at 8:22am with the sun only 18.8 degrees above the east northeast. 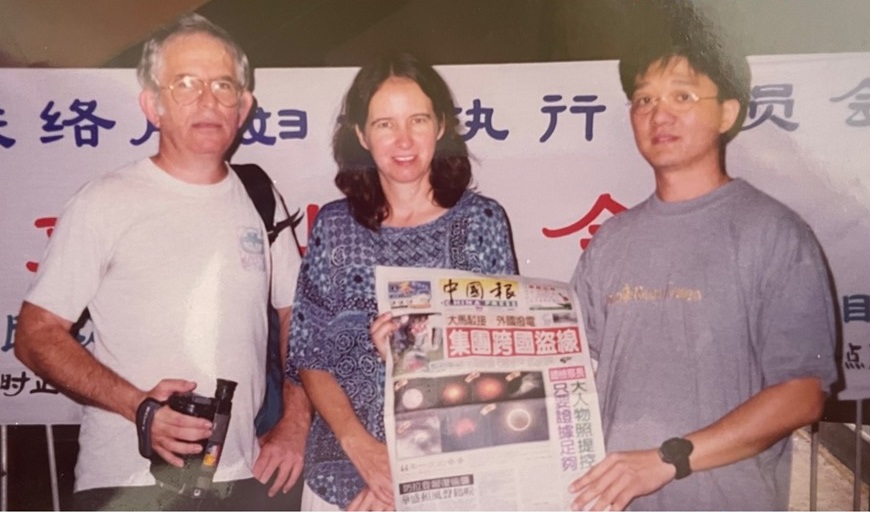 All equipment functioned properly except that with the clouds present, I decided to remove the ND5 solar filter protecting the video camera. Normally this can be quite hazardous, but with cloudy skies it can be a real benefit. I had accidentally discovered this little trick in Gabon in March 1987 during the one-second annular eclipse there and it worked quite well this time. As long as there was filtration by clouds, the TV could define the sun/moon crisply with the filter removed. As the time of central eclipse drew nearer, the clouds were more in front of the sun than away from it. I expected to spot Baily’s Beads, the elusive points of light poking out between lunar mountains, as early as ten minutes before central eclipse. But clouds were too thick. Then at 8:22am, the clouds parted and the eclipse was observed for about a minute. There were only two lunar mountain peaks that appeared to touch the edge of the solar disk. A near complete annulus (ring) was seen. This was a signal that our site was located too far north of the edge. Richard’s site never cleared. 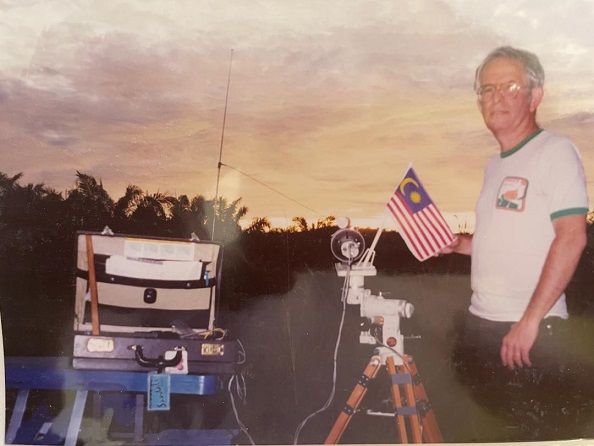 Even though this was not a total eclipse where the temperature can drop by 10 or more degrees, we felt the air temperature had definitely dropped during the eclipse process. Forty minutes later, the sky cleared up completely and the temperature began to climb rapidly. Because of the cloud situation we did not record temperature data this time and also did not attempt to see Venus. Our sites were located along a busy two lane road and trucks, cars and buses slowed to watch us observe. Vibrations from passing vehicles did not affect our observations nor did insects. There was jungle all around, so we were lucky in that respect. Lee had brought a small folding table and a Celestron 5 to which I had attached a 35mm camera. The C5 was borrowed from another of my email contacts, K.K.Looi who had trucked it down from the Malaysian capital city of Kuala Lumpur. Though the eclipse was somewhat disappointing, everyone posed for group photos anyway. At one point we had about 12 people at our site. I bought a Malaysian flag at a petrol station to fly at the site because I had left our Texas flag at home, and also we were told that it was politically incorrect to fly the Singaporean flag due to recent disputes over water between the two countries. Singapore is an island and depends totally on Malaysia for its water supply. But that is another story.

On Sunday, memories of the eclipse had faded a bit and we had a chance to relax and play tourist. Lee took us on a run of Singapore’s Chinatown market, a terrific experience if you want to see food of every description. This includes watching frogs getting their heads bashed in, a sumo wrestler vendor with the words “Be Patient” tattooed on his back, and every variety of fish imaginable. After this, we wandered through one of the big high-tech shopping malls, drove to Mt. Faber, and passed through Little India. We also found news accounts of the eclipse written in Chinese. Lee had already developed his photos and had scanned one of his eclipse video sequences and made an MPEG move on a floppy disc. That evening, Lynn and I set out on the modern Metro Rail system to find a ‘wayang’–a Chinese opera that was to be staged in several places throughout Singapore commemorating the start of the Festival of Hungry Ghosts. This festival happened to coincide with the day of the eclipse, August 22. We had earlier purchased some fake money from the Bank of Hell which is supposed to be burned during the festival. However, we could not find a place to burn it due to strict laws in the country: no tossing of trash, no spitting, no buying chewing gum and no looking through the wrong end of the telescope all will get you a $500. fine. Being caught with drugs in Malaysia, by the way, results in the death penalty (no options).

On Monday, it rained again but we managed to circulate to various shopping malls and restaurants. Although I had been to Singapore in 1983 on the way to observe the total solar eclipse in Indonesia, I was amazed to see how much the country had changed. Singapore boasts the best airport in the world and also scores highest on shopping for tourists. Everywhere you go there are modern, clean buildings; sometimes there are two McDonalds restaurants on the same block. Food is very cheap and one of the great joys of traveling here is the remarkable cleanliness and first rate look of parks, streets, and buildings. There are so many varieties of restaurants. Our meals seldom exceeded US$3.50 for both of us combined even though hotel prices are comparable with the USA and rental cars are the most expensive of any country I have been to. For great vegetarian food Lynn and I recommend Komala Villas. Singapore recently suffered a 20% currency devaluation which made it very economical for Americans. Our trip to Malaysia found its local currency depreciated by 40% this summer. Because the price of gasoline is half that of Singapore, most Singaporeans flood across to buy Malaysian gas; a new law requires that any driver going from Singapore to Malaysia must show 3/4 full tank of gas. This is designed to enable Singapore to collect as much gasoline tax as possible.

Monday night saw the rain stop and we were the only tourists to take the ZooPlus bus to the Night Safari–a first rate zoo park that is only exceeded by the San Diego Wildlife Park. My Sony camcorder was put into action and took excellent video of fruit bats, hyenas, axis deer, tigers, and other creatures. Singapore is now on our top picks list!

I usually scan the local news for information on eclipse related stories; this time there was a bizarre account of a local eclipse experiment featuring eggs that were found to stand upright only during the eclipse. A photo made the newspaper, but there was no discussion on the scientific basis for the claim. I now will view eggs with more reverence next time I see them in a supermarket.

Upon returning back to Houston on August 27 I found an email sent to me the day we had first departed Houston recommending our eclipse sites be shifted 1km to the south for best Baily’s Beads viewing. Unfortunately it did not arrive in time. We all agreed that the trip had been a lot of fun and I look forward to returning to Singapore some day. 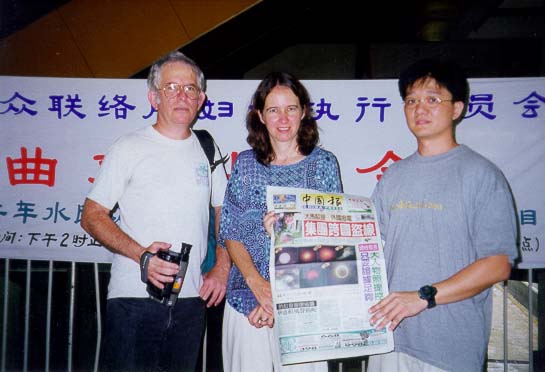 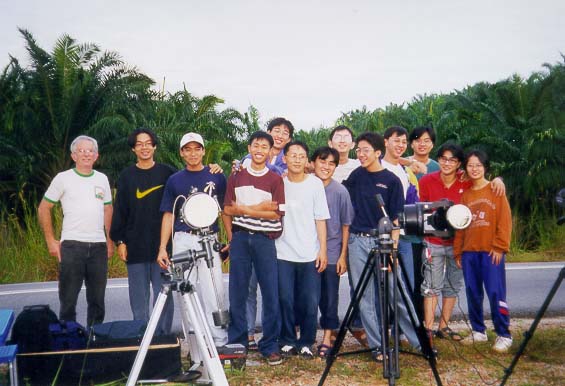