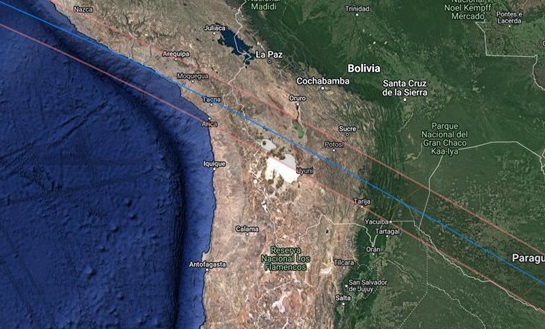 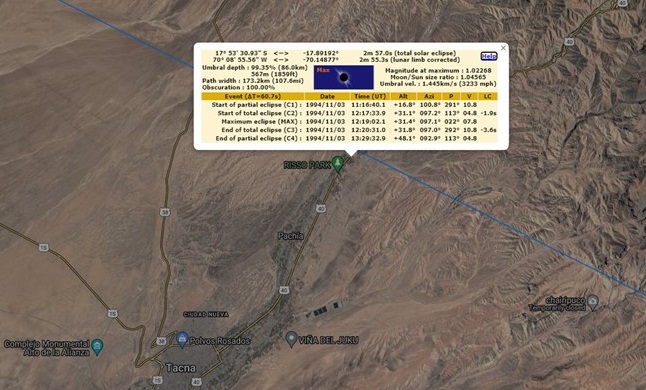 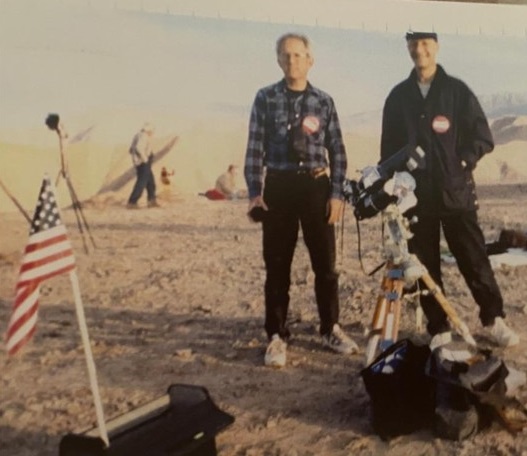 It was November 3,1994 and our group of 136 persons from 14 states and five countries landed in the cities of Arequipa and Tacna, Peru to began our 16th attempt at a solar eclipse. The local political situation was hot and there was some concern for political violence based on accounts in the US. However, the truth of the matter was that both Tacna and Arequipa were very quiet. I led the group in Tacna, a small town near the border of Peru and Chile and gave a pre-eclipse briefing and simulation. Only six hours remained until an 11pm wakeup call and midnight departure for the eclipse site, high in the mountains. Yet at 5pm a parade began outside the Hotel Camino Real one of our two resident properties. The parade, which went on for many hours, featured local people on floats, marching bands and general polite chaos. It commemorated both Halloween and the eclipse of the sun. The parade winded its way through Tacna’s narrow streets with lots of homemade floats one of which burned to the ground after catching fire. Costumed merrymakers were everywhere of all ages creating traffic jams and photo opportunities. It was along the parade route that Art Ciampi placed his bag down momentarily to take a picture, only to have it stolen (passports, money, camera body–all gone). Art had the unique distinction of being the only person to be robbed during the eclipse period, as documented in the next days’ local newspaper.

Despite this unpleasant start, the Tacna group of 69 persons traveled through the low cloud enshrouded skies that enveloped Tacna, a town situated at 1500 feet above sea level. I had anticipated this and had selected a observation site at 7,200 feet elevation some 39km north of Tacna. On eclipse morning a rarely seen high altitude cloud mass stretched over all of Peru. The day before and after it would be clear.

Departing our two hotels at staggered intervals, we arrived at our site only 45 minutes later, having broken through the fog level 23km from our destination. Using a rented pickup truck Jose Sancho, Larry Mitchell, Buster Wilson and myself drove up the road and found a backup site was also in the clear and it was decided to bring up the group in two buses along with six guards from the Peruvian Air Force.

I used a GPS receiver loaned again to us by Trimble Navigation of Sunnyvale CA to guide us to the sites. Arrangements had been made to declare our site a temporary military zone by the local Air Force Commander Col. Montedoro. The guards were armed with AK-47 assault rifles ensuring that outsiders did not bother our group. Prior to dawn the Southern Cross, Eta Carina and other celestial wonders were spotted. The observing was so good that five persons went out the following night and spent the entire evening observing. They declared it was the best site that they had been to in years. As dawn came at 5am, bands of cirrus of varying density moved across the sky in no apparent pattern. First contact occurred at 6:16am right on schedule. The moon began to bit into the sun; eclipse glasses were given out so that everybody including guides and guards could watch the partial phases. As totality got closer a car or bus would move down the road at high speed only to be flagged to slow down by the guards so a cloud of dust would not descend on the optical equipment.

Two portable toilets were set up by Mike Schramm, amateur astronomer and building contractor, and they were used effectively over the next five hours. Totality approached at 7:17am. Loretta Weiss (Los Alamos National Labs) blew the official whistle signaling that it was safe to look directly at the sun without mylar filters. The moon’s shadow could easily be seen looming overhead as it came onto shore from the Pacific Ocean. The sun, which had been immersed in cirrus, all of a sudden exploded into a white corona–the cirrus was extremely thin and allowed all of the spectacular eclipse features to be clearly seen. A brilliant diamond ring had preceded totality, followed by Baily’s Beads which only lasted the usual several seconds. The chromosphere then lit up the pink edge of the sun and a huge hedgegrow prominence followed. But to me, looking through the ground glass screen of an Olympus camera attached to a Celestron 5 telescope, the inner and middle corona resembled a 19th century drawing. Rays could be seen everywhere coming out of the moon, at the poles, mid latitudes, and equator. This was the best corona I had ever seen up to this time.

I shared a Takahashi mount with Shuttle astronaut Claude Nicollier who used about 70% of the 173 seconds of totality to photograph the eclipse. I was able to fire off 6 shots but in my haste forgot to refocus after removing the solar filter. However, I did manage to get one fairly good shot of the corona. 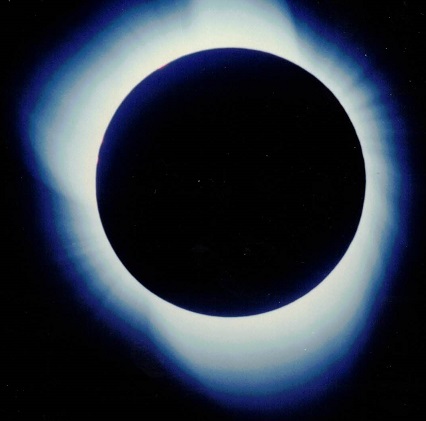 Totality. The blue tint is an artifact of processing. 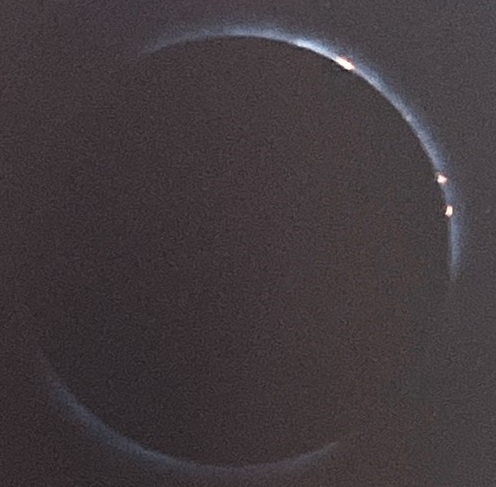 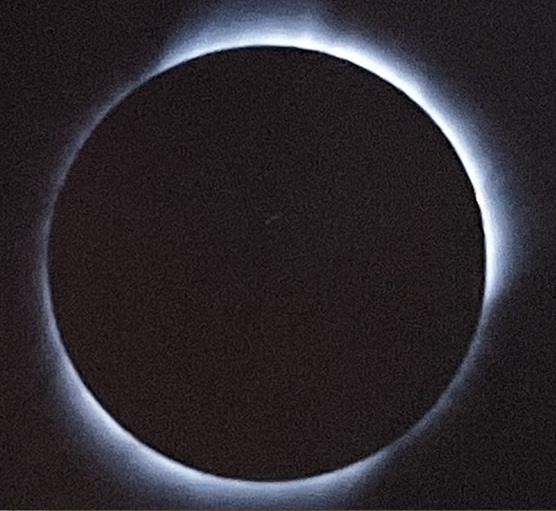 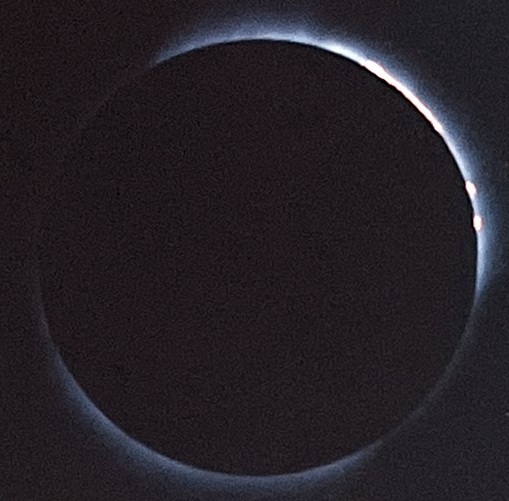 Some shots from the team.

The temperature was seen by Mary Schiflett and Bill Molinare to drop 15 deg. F. The ‘eclipse wind’ never appeared. One observer could easily read the smallest print on the eye chart used to gauge the brightness of the eclipse. This was then one of the brighter eclipses. In the west I could easily spot Sirius; just above and to the right of the sun was Venus. Clouds covered much of the sky but others along the coast reported seeing the southern cross stars. All around the horizon were sunset colors. The clouds negated the shadow bands, as none were reported. But my friend Juan Carlos Valer did see them from a site at 12,000 feet altitude in Bolivia. 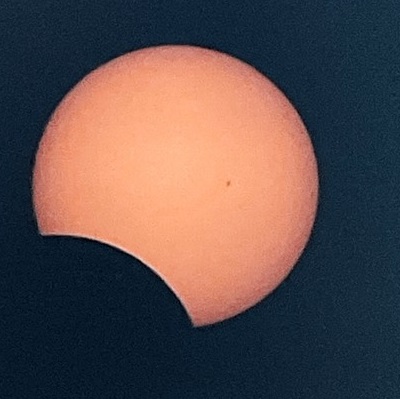 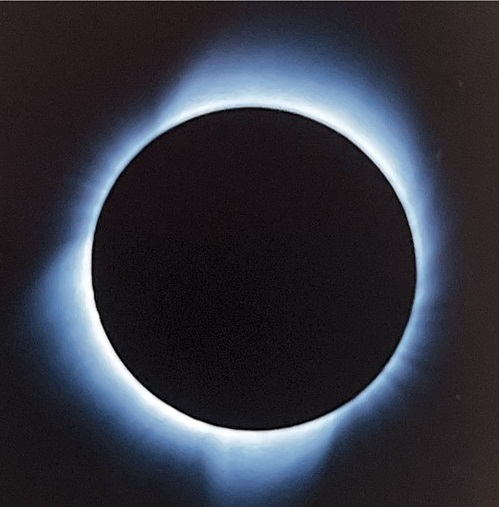 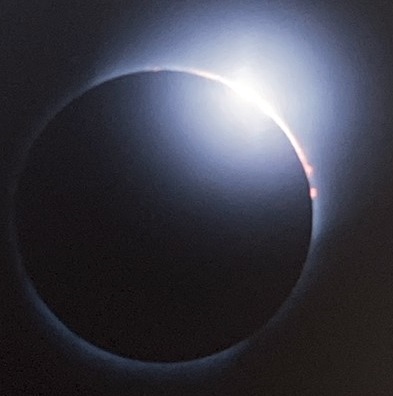 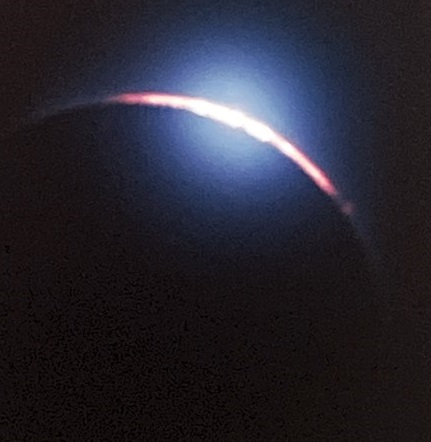 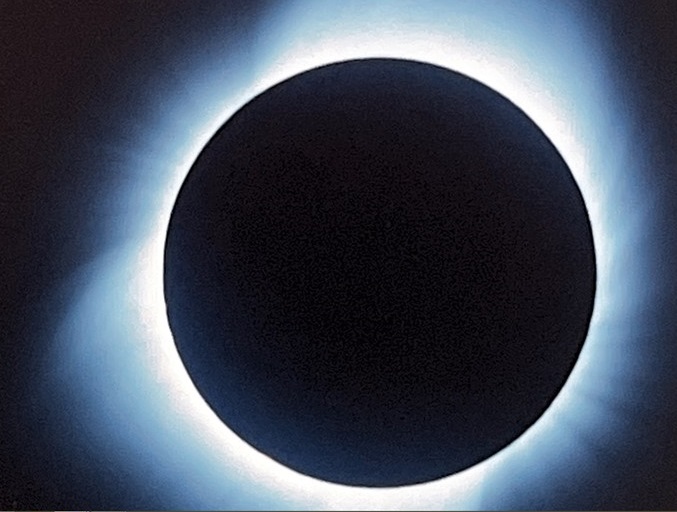 Additional photos not in sequence.

Almost as soon as it had begun the whistle blew again heralding the return of the sun. Another diamond ring emerged and then the solar crescent claimed the sky as its own. We had seen the eclipse! Six colleagues from Japan were particularly elated, though Dick Dietz from Colorado suffered a total failure of his electrical system which he claims to have simplified from his experience with the previous solar eclipse. Art Ciampi, who had been so dejected after his experience with Peruvian thieves, got his long sought after eclipse photos–more valuable than passports or money. At least one person neglected to remove a solar filter during totality and obtained no video. But most everyone else obtained something. Not a single flash camera erupted even though 14 person were seeing the eclipse for the very first time. A small Honda had been allowed onto the edge of our site and it was only later that I found out it was owned by a Peruvian general who outranked all the military personnel at our site. Following the eclipse, sandwiches were distributed; dozens remained uneaten due to the long night and the excitement over the eclipse. The toilets were left on the mountain top and we suspect that they will be rediscovered in future years and mistaken for a primitive worship site. 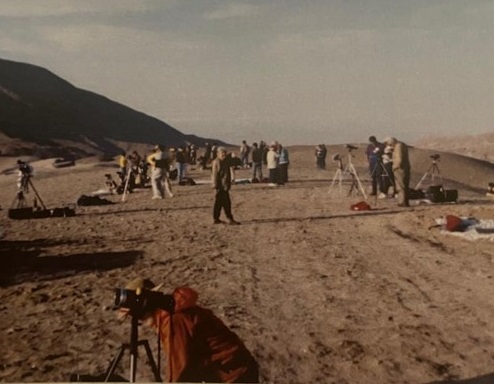 Our flat site in the Andes with armed guards (not shown).

Up the coast, the second JSCAS group led by astronaut Jeff Hoffman and Space Physicist Pat Reiff encountered thicker clouds. They decided to separate into three groups. One went north and was completely socked in. A second went south toward the coast, which had always been fogged in–except on eclipse day. The third group had larger telescopes which could not be moved. The coastal group made two mad dashes following patches of sunlight on nearby hills to denote where the best skies might be. They observed the eclipse very well in spite of thin cirrus. It included a special metaphysical visionaries group which I had organized to see the eclipse as a unique earthly experience—no cameras or telescopes here. The group was especially moved by the positive energy process generated by the eclipse. The third group also observed totality through some cloud.

The science team measuring Bailys’ Beads looked at the eclipse from stations 1.6 and 3.3km south of the northern limit. They also encountered clouds. Richard Nugent, Isao Sato and Gary Nealis all were unable to secure good bead images mainly because they kept their ND5 filters on during the bead phase. However, Chuck Herold removed his solar filter from a Celestron 5 and successfully videotaped about 30 seconds of Baily’s Beads. This was phenomenal for Chuck who has had a legendary black cloud following him from eclipse to eclipse. I suspect this was his most uplifting experience except for being mistaken for a living god by warriors at a Masai village in Kenya following the total solar eclipse in 1980. Chuck Gilbert from Trimble Navigation recorded GPS data on a laptop computer in Arequipa for use in correlating with other measurements of Baily’s Beads being taken in Bolivia and Chile.

In Peru there was a great deal of publicity about how to safely see the eclipse. Yet the newspaper reported 50 cases of eye damage. Eclipse souvenirs were rare. One T-shirt vendor appeared at our post eclipse dinner and ran out of T-shirts within one minute! Following our departure from Tacna, I was allowed to sit in the jump seat of the Faucett Airlines Boeing 737 through the landing phase in Arequipa and then again upon take off from Arequipa where we collected the rest of our group. The Sabancaya volcano which has been active now for the last four years was the final feature of our eclipse tour. I was able to direct the pilot for two 360 degree loops around the summit of Sabancaya and was allowed to use the PA system for commentary. Everyone had outstanding views on this remarkably clear early morning pass. You could literally gaze directly into the steaming throat of this mountain where locations of numerous steam fumaroles could be seen. During totality it was reported that Sabancaya could be seen from one of our eclipse sites vigorously emitting steam plumes. 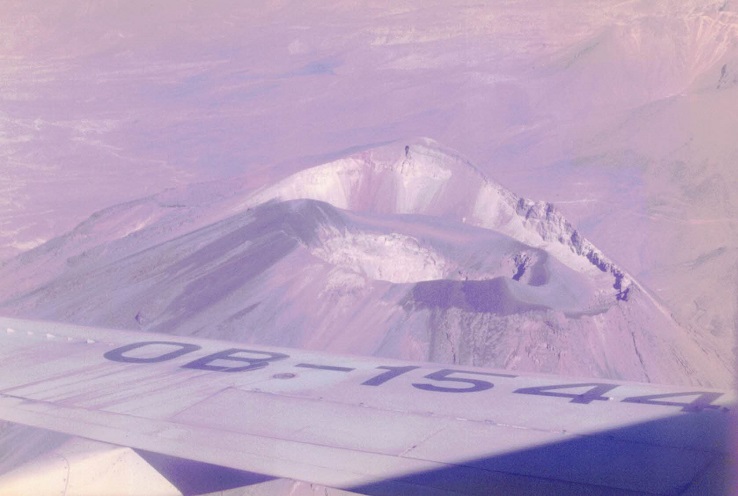 We got really close to the summit of Sabancaya after I requested the pilot to deviate. This was likely a one time event.

It was on this trip that I met my current wife Lynn Palmer who remained behind an extra day, as did I. We began to talk in the airport waiting room and have been together ever since. So, while the eclipse itself was memorable, I got much more than I had planned in making this trip to Peru.