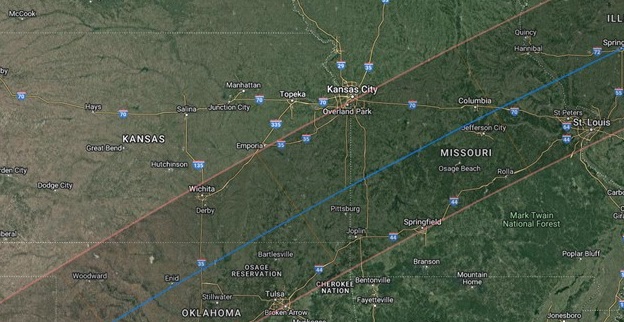 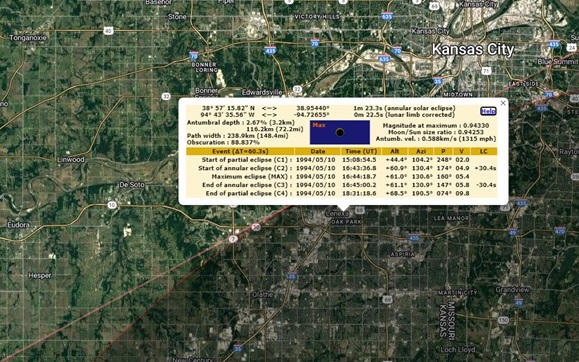 The first of four solar eclipses separated by 6 months was kicked off May 10 with the annular eclipse that was witnessed from Mexico to Maine. The RING OF FIRE EXPEDITIONS NASA Johnson Space Center Astronomical Society science effort was divided into three separate expeditions. Weather over much of the Texas-Oklahoma region had been predicted to be iffy at best and cloudy with thunderstorms at worst. On Monday May 9 at 11am I decided to fly to Kansas City, Kansas while Gary Nealis elected to drive to Tulsa, OK, and Richard Nugent vectored to El Paso. All three of us were to record Baily’s Beads data at the annular eclipse edge as part of our continuing program to measure small changes in the solar radius.

On May 9, I arrived at Houston’s Hobby airport and waited an hour before boarding a Southwest Airlines flight. Lesson learned: never tell a security official when seeing a telescope under the X-ray machine, that ‘the snakes have never yet escaped from this special container and this time I did bring anti-venom”. We took off at 4pm and arrived in Kansas City at 5:30. The eclipse was set for 11:43am the next day. The view was cloudy from Houston all the way to the Kansas border where it finally broke into clear skies. I rented a car and drove the 45 miles into downtown Kansas City where I found a room at the Radisson Hotel. There, after consuming a Subway sandwich, I followed the Weather Channel for the next hour while working on procedures for entering waypoints into a Global Positioning System (GPS) receiver that was loaned to me by Trimble Navigation of Sunnyvale, CA for the purposes of obtaining exact site coordinates. After watching an abominable movie on HBO the waypoints (latitudes/longitudes describing the north edge of the eclipse path where Baily’s Beads were expected) were finally completed.

At 3am I awoke and could not get back to sleep. Peering out the 8th floor of the hotel, I could easily make out stars—it remained very clear. Between 5:00 and 5:30 I began repacking and checked out of the hotel. I placed the GPS antenna on the roof of the rented Ford Escort and began to wend my way southwest on Highway 35 toward the town of Olatha. I had no topographic maps. Getting into freeway traffic I found it impossible to even check the rental car map and find my way about. Instead I switched on the GPS and had it navigate to the nearest waypoints. The readout showed exactly how far the car was from the imaginary line defining the northern limit. I needed to be located within 1 or 2 miles crosstrack distance of this line to the south. It was amazing to simply watch the readout and the freeway and not have to touch a map. Now I knew why cruise missiles, also operating with GPS, were so effective in the recent war against Iraq.

As the sun rose, I could see thick cirrus in the south and southwest extending up from the horizon to about 5 degrees elevation. I began to get concerned. The closer I drove to Olatha, the higher the clouds seemed to rise. As they reached 10 degrees, I still had not reached the limit line. So, I turned of at the suburb of Lenexa and began to aimlessly circle through residential and warehouse and office park areas searching for a good site. I finally settled on a Veterans of Foreign Wars Lodge next to station #2 of the Lenexa Fire Dept. This seemed like an out of the way spot and at 7am I began to deploy my telescope and video equipment. 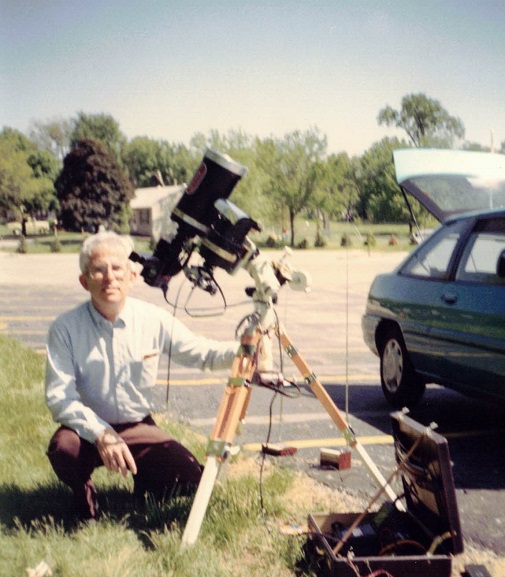 My site near an industrial park. Celestron 90 and Celestron 5 with video camera mounted in tandem.

Within an hour I was visited by two men pulling a boat who just wanted to say; that they were going fishing during the eclipse. Shortly afterward another guy in a pickup truck with a barking beagle pulled up to let me know that his dog would be doing a bit of running about and would not bother me. By 8:45 I was all set. The clouds which had seemingly gotten a little higher in the sky, now began to diminish. At 9:40am I began to record GPS positions at the site. Then another person walked up to me and wanted to know if I was observing the eclipse. He lived 100 yards away; his wife, who notices everything, told him to check me out. I gave him a piece of mylar and instructed him how to view the eclipse. At 10:09 a bit was missing out of the sun. Twenty minutes later, the lighting around the sky was noticeably subdued. 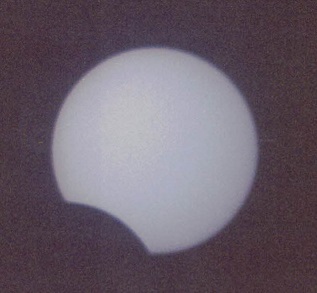 At 10:45 I could see crescent images on the ground beneath the leaves of overhanging trees. I began to take a second set of GPS readings at 10:45 and noticed that all the receiver memory had filled up. This was one thing I had not expected. However, the good news is that all I need was a few minutes of data for precision post eclipse differential correction. In fact, I had recorded fully 15 minutes worth of positions.

It was 11:00am, and it was then I saw 8 men in fireman’s uniforms charging over a nearby rise toward me. They had waited until 45minutes before central eclipse to come over and see what was going on. They said that for some unexplained reason that fires never break out during an eclipse.

Shortly after this encounter I noticed that my clock drive was not tracking properly due to an imbalanced load on the telescope mount. I began to manually correct in Right Ascension and Declination–something you don’t ever want to do in an eclipse. At 11:14 I noticed a coupler began to come loose. Where were my tiny tools when I needed them? The man who I had given a piece of mylar to returned from across the street and offered to find me a small screwdriver. He actually found one the right size and within 5 minutes I was back in business.

Then a small bolt holding my C90 and 35mm camera began to twist slightly. The correct Allen wrench to fix this problem had been left behind in Houston. One of the firemen ran back to the station and came back with an Ace Hardware box of wrenches, a collection so large even I had to admire it. I grabbed the correct one and the bolt was tightened. (Another lesson: never tell a fireman “here is what happens when I focus the sun onto a piece of paper” and it bursts into flames right in front of him. I am still drying out from that one).

At 11:40am, I began to record video. The small 4-inch monitor could now be more easily seen in the dimmed light, but the overloading proved harder to control. The movement of the sun high in the sky was causing the crescent sun to rotate through the narrow field of view of the Celestron 5 from which the video was being made. I could only see one cusp, not both. This made it impossible to know how close the cusps were closing in as the moment of tangency approached. I was at the eclipse edge where both cusps literally collide revealing Baily’s Beads at the point of tangency.

Time signals boomed in loud and clear for the first minute or two and then faded out completely. As the Baily’s Beads dissipated, WWV returned on 5 Mhz. I stopped recording and played back the Beads to the firefighting audience who were all very elated and impressed. They provided me with a souvenir Lenexa Fire Dept. patch. I had earlier suggested that they use the official department binoculars to project the sun’s image onto a white surface. Some back at the station had done exactly that and got a great but safe view of the partial phases.

Quite by accident one fireman who saw the GPS receiver told me that the Garmin GPS factory was only two blocks away. This was interesting because Ken Willcox, who had a Garmin receiver, could not achieve better than 100m accuracy because Garmin had not been able to demonstrate differential correction with his data. Differential correction is a high accuracy position (perhaps down to 3 feet or more) achieved with two receivers. The Trimble company had a base station in Kansas which was later asked to download data so that my data could be corrected properly. This would be the first time we have been able to achieve such a level of accuracy on an amateur astronomical expedition.

By 1:00pm I was back on the road toward the Kansas City airport still under clear skies. (Lesson learned: never drive 75mph with a Subway sandwich full of vinegar and oil in one hand in a Ford Escort! Those stains just won’t come out.) Upon arrival back in Houston I learned that both Gary and Richard were successful also. This was another excellent success on the record books.