by Paul D. Maley (with great help reconstructing the trip after 30 years from Richard Nugent and Debbie Moran)

In 1991 I approached the Institute of Volcanology and Seismology in Petropavlovsk, Kamchatski about the possibility to do a cooperative expedition to one of the active volcanoes in the area. They selected the Karymski volcano in order to help them map the magnetic field using GPS receivers to plot locations of areas of research interest. To make this work required a small team of people to work in conjunction with the Russian vulcanologists in the field. The entire trip from conception to return became a bizarre and complicated exercise but turned out to be completely successful.  This was at a time after the collapse of the Soviet Union when the Russian Far East was part of their “wild wild west”.

Russia’s Kamchatka Peninsula is the site of no less than 29 active volcanoes, including 7 snow-capped stratocones that tower more than 10,000 ft./3,000 m high. Every year there are several volcanic eruptions in Kamchatka that create ash clouds that threaten the safety of international air travel across the North Pacific, including travel between the United States and Russia and Japan. The trip participants included myself, Richard Nugent, Debbie Moran, Matt Delavoryas, Jim Cromie, Mary Maxwell, Bob Hyde, and Pat Hyde.

The first step had to do with establishing a ground operator (Alpha Tour) in Siberia that could be trusted to coordinate and assure our ground arrangements. With the collapse of the old Soviet Union businesses were evolving at a rapid pace with little knowledge on our side of whether such a trip could be put together and work out. Cost was the big thing. We had to work with a fixed budget and itinerary as well as inclusions including flights from the US to the Kamchatka peninsula, a helicopter out to the volcano and a return flight sequence back to the US. All of this had to be done not knowing whether the word of our local operator could be trusted.

The second step involved payment up front. This was a huge risk but the operator insisted on meeting me at the Anchorage, Alaska airport and handing over a wad of US dollars. Back then security was not as tight as it is today and so transporting money was not a problem. I met my contact a few months prior to the start of our trip in the arrivals area at the airport and slipped him an envelope with thousands of dollars in $100 bills per the agreement. I then returned to Houston not knowing if this was going to turn out to be a scam or if he would come through for us.

Then it was time for us to travel from Houston to Petropavlovsk.

In the figure above we went from Houston to Seattle to Anchorage where we got on a charter flight to Magadan, Russia as a refueling stop, finally ending in Petropavlovsk. No problems so far. Once there we were met and transferred to our hotel. The next day we met our colleagues from the Institute and began to plan the daily activities. The idea was to take helicopter to the volcano since there are no roads in that remote part of Siberia. 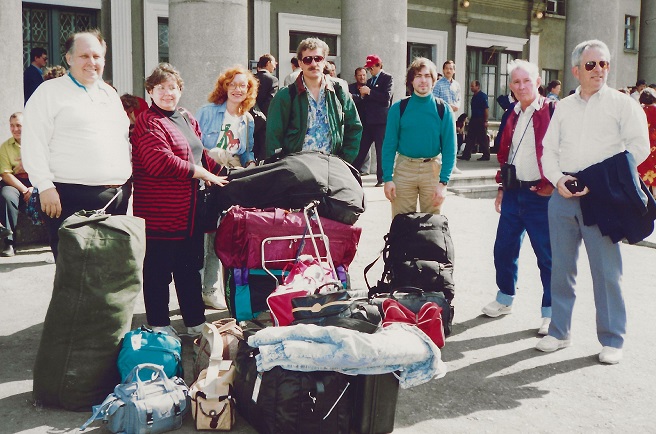 Karymski is the most active volcano on the east side of the peninsula standing a mere 5,000 ft./1536m high. It is about 122 km/76mi from Petropavlovsk and since there are no runways anywhere nearby the helicopter was the best solution.

The Russian helicopter looked as rickety as you can imagine, and LOUD. Having earplugs was a great help. The pilots apparently looked comfortable and used to flying and so we had to hold on tight and hoped that it would get us there safely.  There was an entire fleet of them at the Petropavlovsk airport. 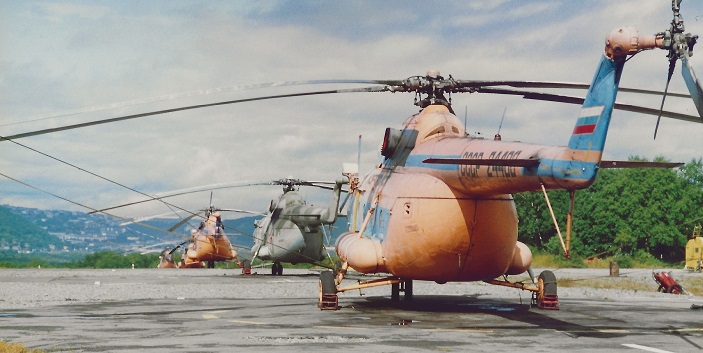 Much of the time during our stay Karymski was shrouded by cloud but when it cleared the volcano took on a really pleasing appearance as in the following image.

Why Karymski since there are many volcanoes there? Our colleagues at the Institute wanted to do sample collection as well as to measure the magnetic deviations and anomalies near the base of the volcano. Betwen 1970 and 1982 mild to moderate explosive eruptions took place and lava flows were emitted from the summit crater during that time too. During our time at the volcano there was no eruption but when   it does spring to live it usually generates ash and smoke as opposed to fountains of fire. 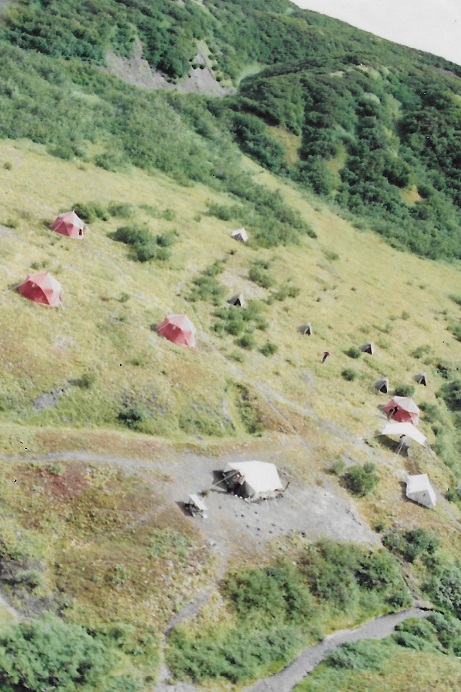 Our tented camp as seen from the helicopter.  Richard Nugent photo. 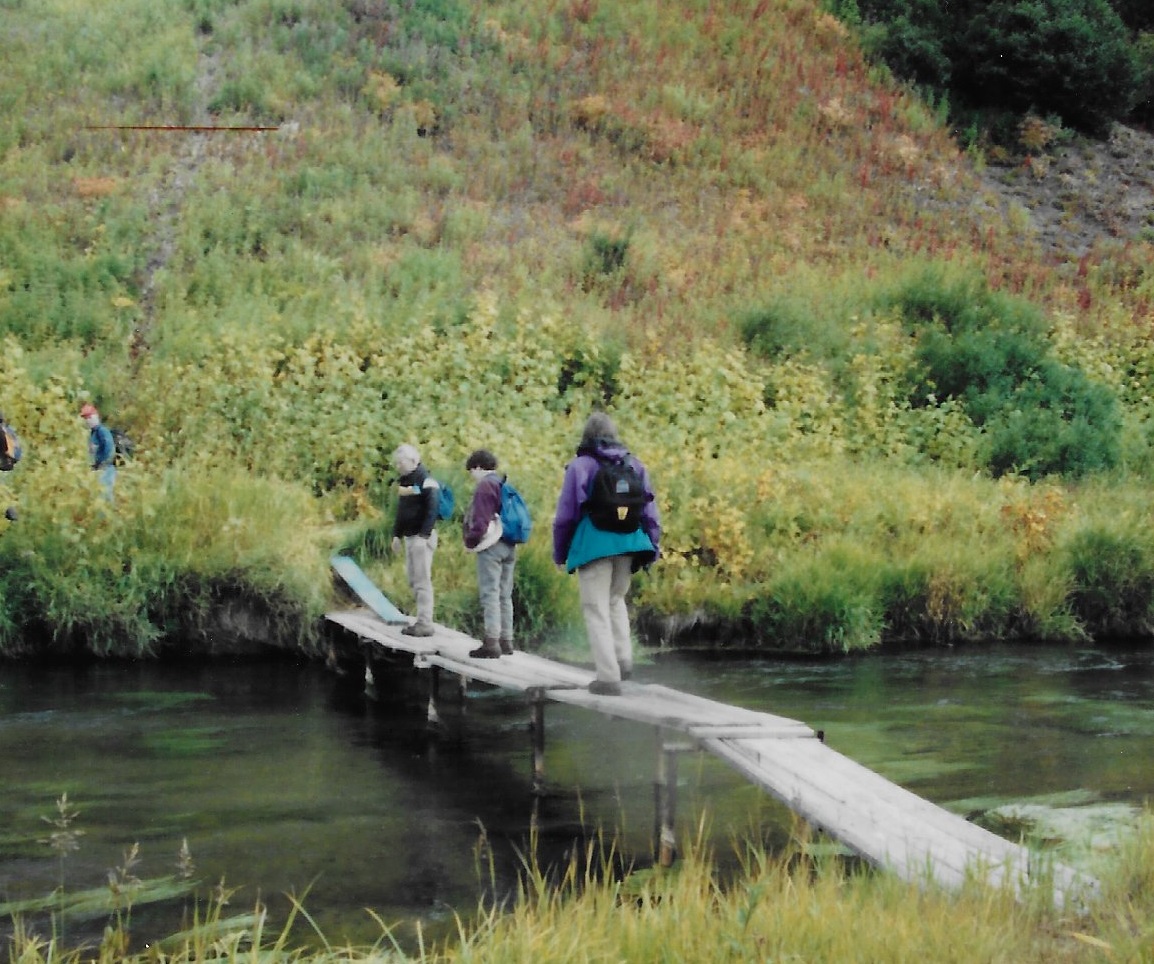 Hills and streams had to be crossed; right to left Matt, Debbie, Paul. Richard Nugent photo. 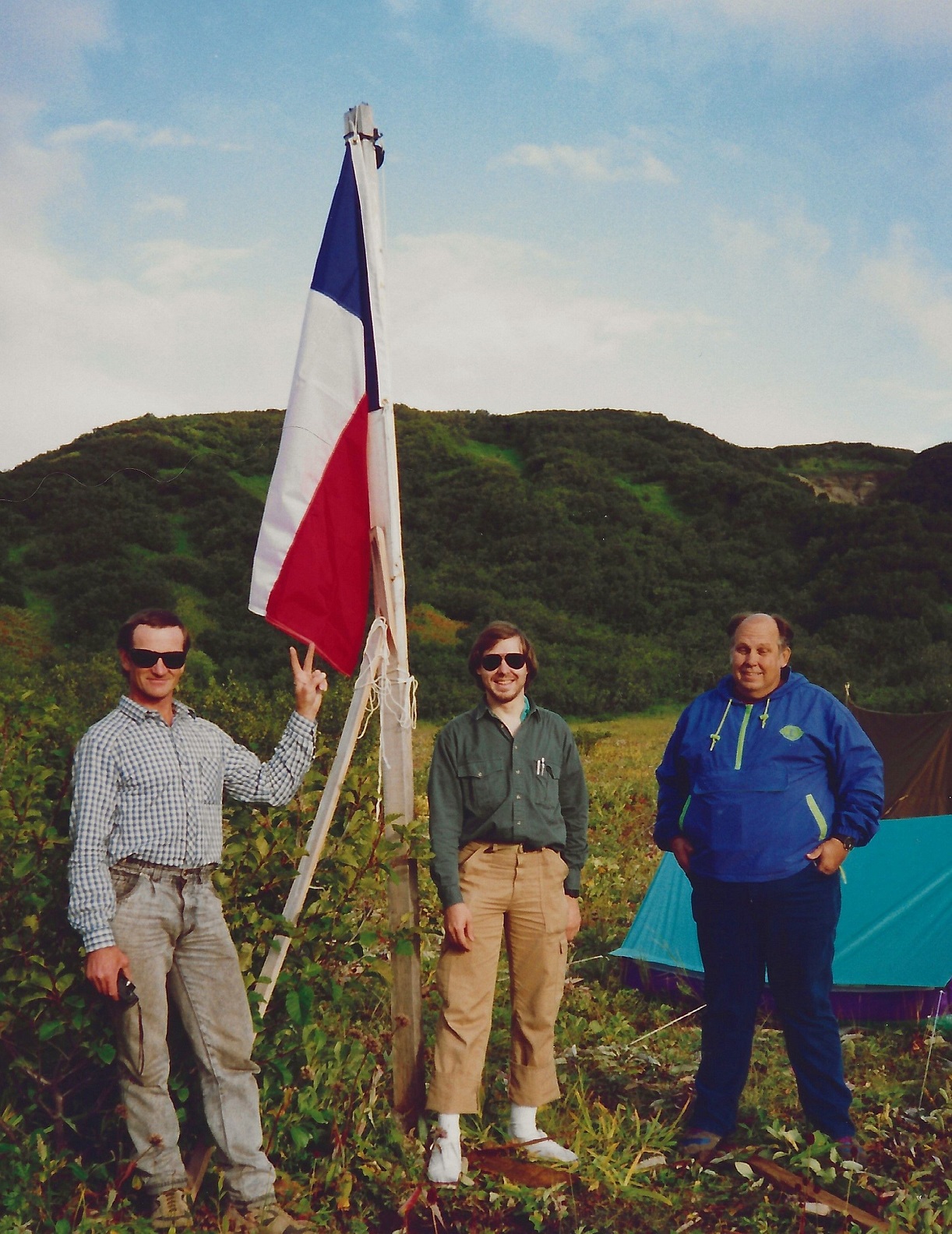 The Texas flag set up in camp. Debbie Moran photo. 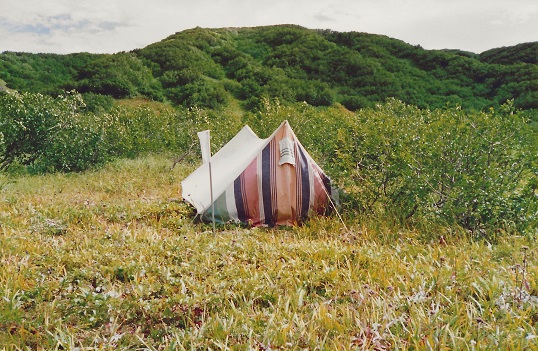 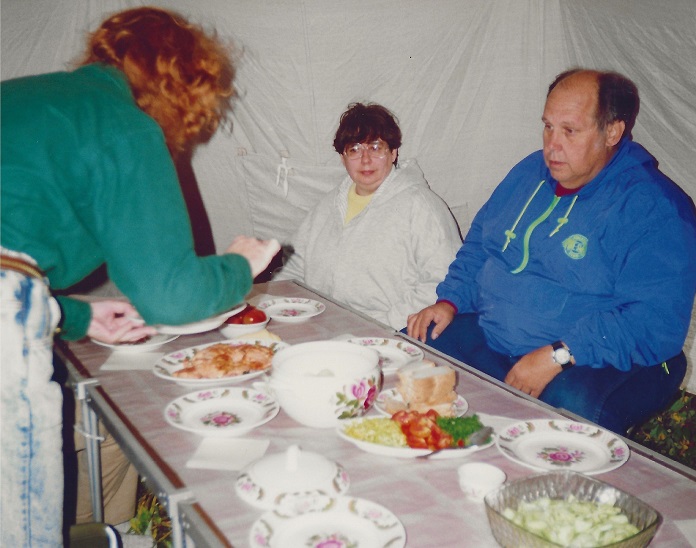 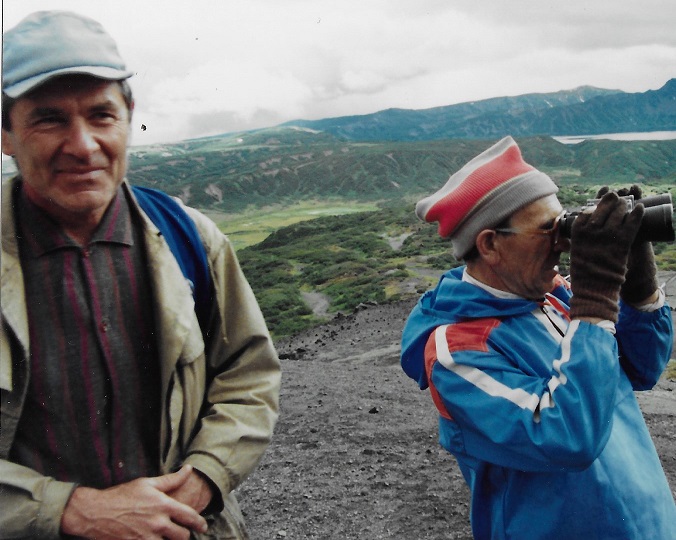 Two of the Russian researchers from the Institute. Richard Nugent photo.

Traversing the fields at the base of the volcano. Left to right: Paul, Jim, Pat, Mary.  Richard Nugent photo. 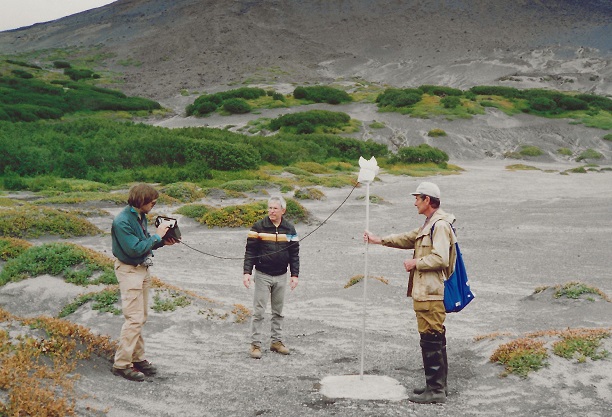 More measuring at the volcano base by Matt, Paul and a Russian volcanologist. Debbie Moran photo.

The helicopter let us off at the field station near the volcano and we had planned to spend a couple of days helping the Russians in this study. Spending any length of time outside involved dealing with hordes of hungry mosquitoes in certain locations. We had to wear special hats with dense netting and gloves as well as long sleeves and long pants just to coexist with these insects.

The final day of the trip when we were supposed to fly home resulted in a scary and unwelcome surprise. We arrived at the Petropavlovsk airport and were told that no aircraft were being allowed to leave due to a major declared “fuel shortage”. There was a long line outside as well as inside the airport with angry local people wanting to travel. It was not clear if there was any chance other than being stuck without hope of traveling home! Frantic discussions ensued between our ground operator and the airport director. 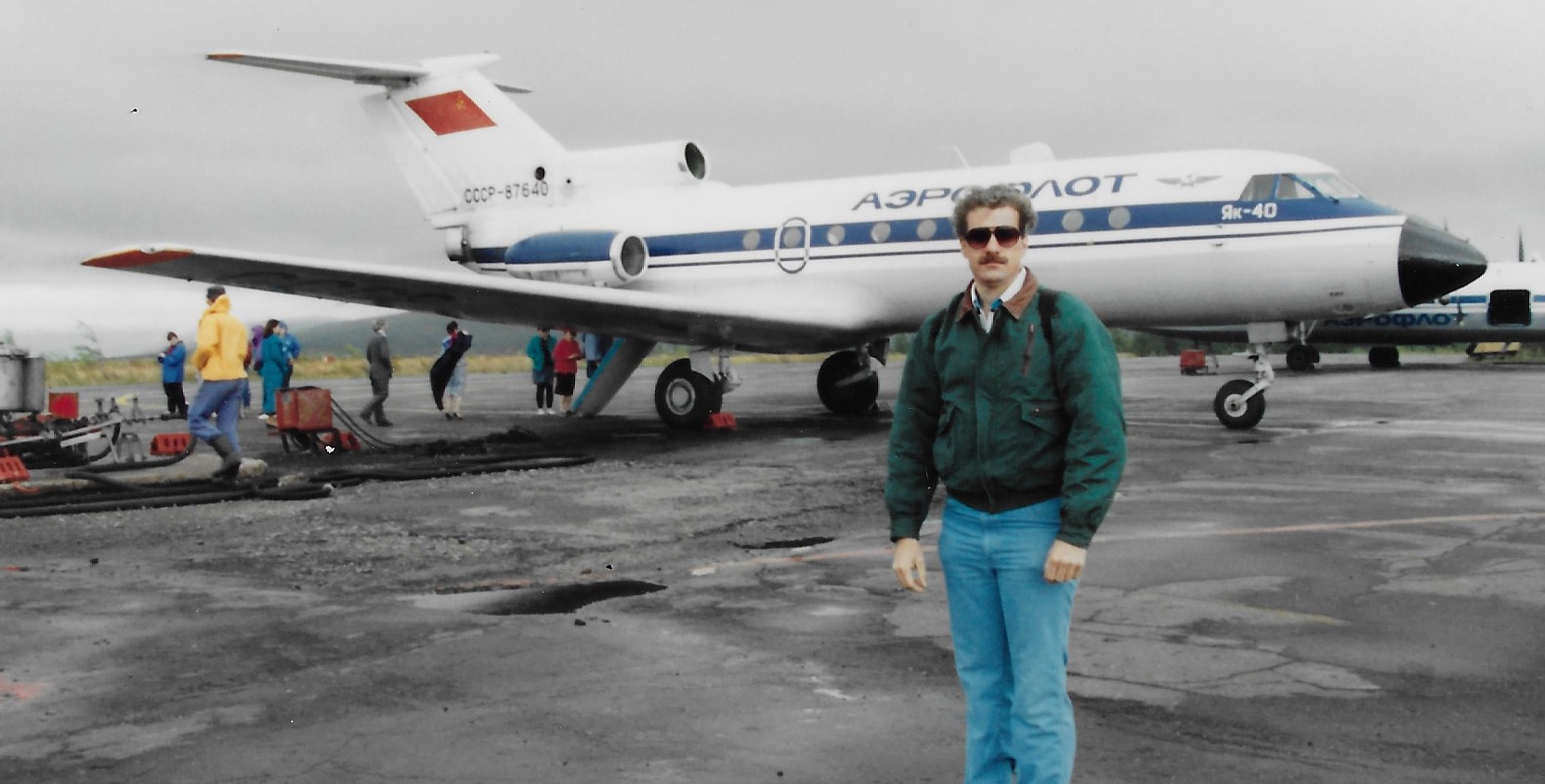 Russian YAK-40 that we used to escape Petropavlovsk

A deal was unbelievably struck that involved paying a significant bribe to charter a small aircraft to fly to Magadan. Additionally, we were told we had to take 2 of the director’s relatives with us. 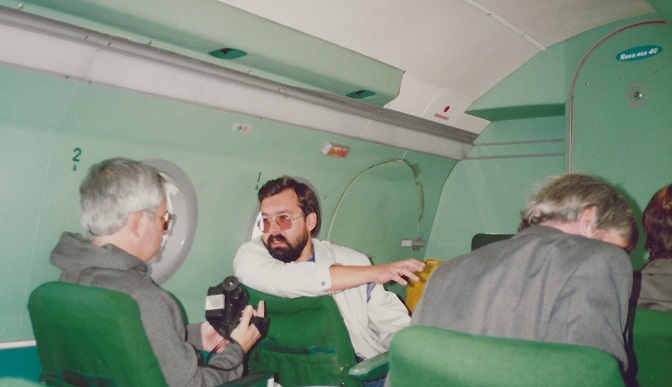 The interior of the YAK-4o.  Debbie Moran photo.

Luckily, that was all we had to do since there were only 2 free seats on the small plane outside of our group. We went around the line outside the airport, through security and past a lot of envious, glaring and upset people who would not be going anywhere. They could see that we foreigners were being given special passage; a lot of shouting occurred as we moved past. Somehow we made it to the plane and into our seats unsure if we would be allowed to take off. After a wait of some period of time we got to the runway and headed out to Magadan where we changed planes and left for Anchorage and finally home!