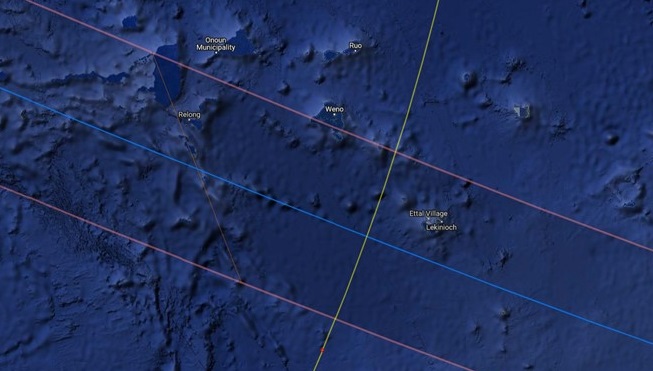 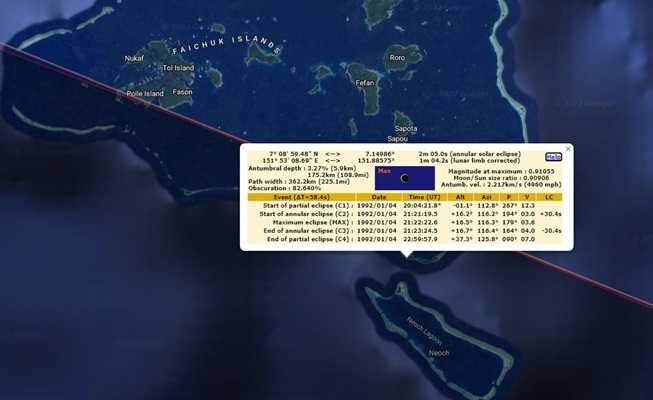 This expedition was part of an IOTA effort to capture Baily’s Beads at the northern edge of this annular solar eclipse path. Beginning in 1973 I had made a number of attempts to avoid going to the center line of certain total and annular eclipses to try to capture such data either with video or still photos. The following were on this trip: Richard Nugent, Derald and Denise Nye, Glenn and Dot Roark, Paul Maley.

It involved flying into Weno, the main airport of the Federated States of Micronesia, overnighting and then taking a motorboat before dawn to get to Otta (Ocha) Island at the edge of the reef.

The object was to make it to the south edge of the reef where we were far enough south of the northern limit of the eclipse so that we would be able to see a prolonged set of Baily’s Beads.

The partial eclipse would begin before local sunrise (6.06am) with the main event occurring at maximum eclipse at 7.23am. Therefore we had to traverse open water, dock the boat, unload everyone, and have enough time to get set up for video and photography.

Since boat travel was slow we left before sunrise while the sky was still dark. The most interesting feature of the boat trip (besides being partly soaked with sea spray) was seeing the biological organisms lighting up the water with blue light. It was a fascinating sight.

Derald and Denise Nye set up their gear on the sand which proved to be stable. Although there was wind we were basically unaffected by this for data collection.

Otta proved to be completely vegetation covered with a small area of beach around the island with a dock and small pier at one location. It was there that we were able to tie down the boat, though it was moving quite a bit in the surf and that impacted unloading and loading.

As the leader of the group I had to insure not only the safety of everyone but to try to maximize the chance of success. In the above photo there are some clouds in the background but generally we were able to capture much of the eclipse including the critical maximum.

In the end this was a highly successful solar eclipse expedition to a very remote location with no other observers or tourists to be seen.