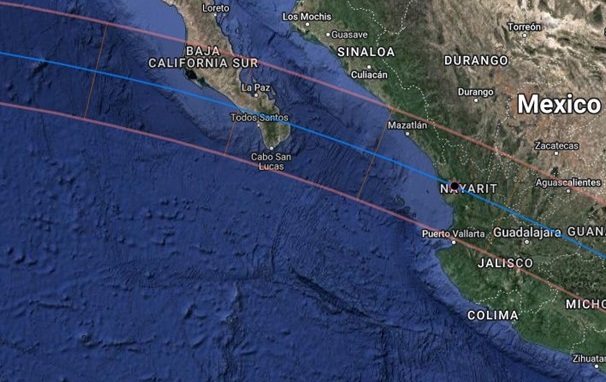 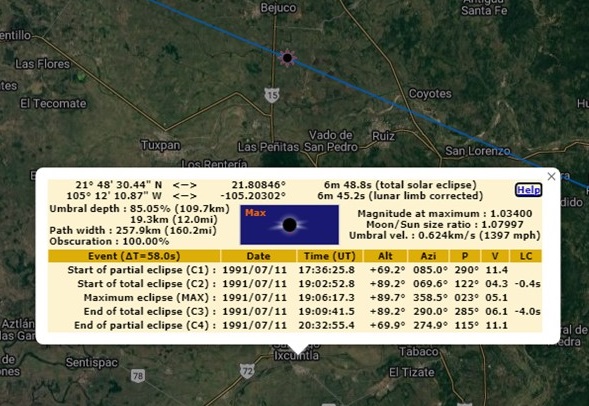 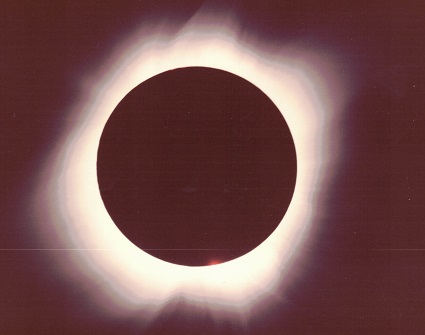 Approximately 320 persons joined the 10th RING OF FIRE EXPEDITIONS total solar eclipse venture to Mexico organized by Paul Maley. The initial group of 140 flew to Puerto Vallarta and traveled 3.5 hours by; bus toward the centerline. A second group of 151 persons flew to Mazatlan on the west coast of Mexico and set up sites on the beach; a third group of 29 went to the inland city of Guadalajara and then drove to Mazatlan on eclipse day.

Weather in all areas had been poor in previous days, but gradually improved as July 11 drew closer. In Puerto Vallarta, none of the congestion that accompanied observers in Hawaii or Baja California–the top two sites for the eclipse–was evident. STS-35 astronaut Dr. Jeff Hoffman and European Space Agency astronaut Claude Nicollier and their wives assisted the Puerto Vallarta group. Claude flew his private plane with Jeff aboard over the centerline area the day before the eclipse in an airborne reconnaissance. Even though they had never seen the region before, their site recommendations based on this overflight was coincidentally the same location chosen by Paul one year earlier.

Ward Booth, an independent film maker under contract to KUHT Channel 8 in Houston, and 6 colleagues met up with the JSCAS group and followed them to the centerline. A satellite receiver which Ward was able to get donated free of charge, was picked up at Houston Intercontinental Airport the day of departure. It was tough to operate but was able to produce two decent images the day before the eclipse. The operator had become ill and never made it to the eclipse site with the receiver.

A planned ham radio link operated by Houstonian Joe Staples was organized with Rob Peterson, who used a hand held receiver to pick up short-wave transmissions while on the highway. Two complete forecasts were received from NOAA meteorologists interpreting cloud cover at the Johnson Space Center. A list of 9 towns were assigned code names and forecasters identified which would have the highest priority of being clear. Rob cycled through several sets of frequencies before ending up with one that could be monitored in real-time on the bus. The forecast showed that the nominal site, locate at a small airport in Santiago Ixcuintla, was looking good. With 3.5 hours to spare, four bus loads spread out along the tarmac at the aerodrome. Skies were partly cloudy but in the direction of the fishing town of San Blas, the skies looked totally clear. 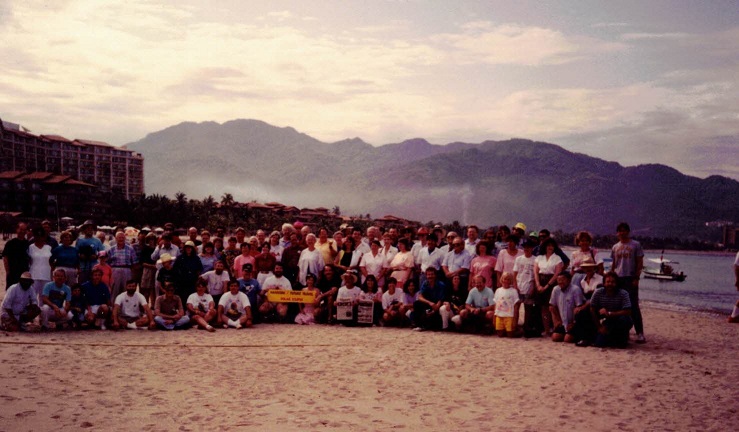 Part of our massive eclipse team on the beach.

During the final weather check forecasters recommended San Blas as the best site. At the two hour point prior to 1st contact, Paul made the decision to split the group because of the appearance of high, low and some middle clouds beginning to spread into the area. Two bus loads sped to San Blas and set up on the shoreline. With one hour to go, a thunderstorm north of Puerto Vallarta and east of San Blas was seen to be growing rapidly by those at Santiago Ixcuintla. It was moving toward San Blas. At the 30 minute point, high clouds, which were lingering near the sun had moved away, leaving the sun unobscured.

Up to this point, three airplanes had landed unexpectedly on the runway at Santiago Ixcuintla just as totality was nearly upon us. Fortunately all the observers had been moved off the runway itself. one Mexican police helicopter appeared, flew past, but did not land. A shadow band experiment setup by Carolyn Peterson, was primed to look for the fleeting bands as they crossed a white Wal-Mart shower curtain. The traditional Texas flag stirred slightly in the small amount of wind felt at the airport. 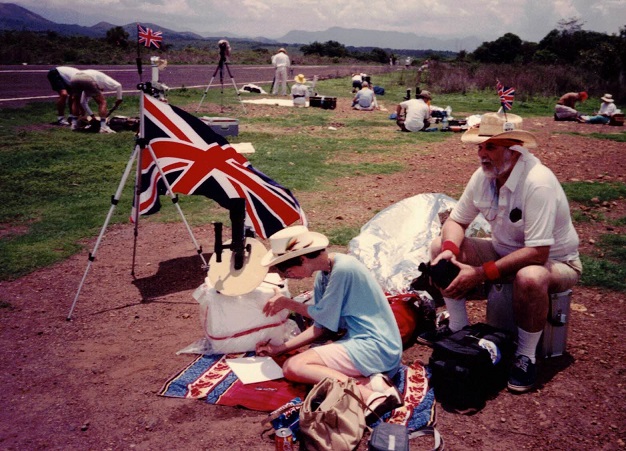 Members of our group representing the UK

Mosquitoes became very active during totality and attacked ecliptophiles vigorously. Local Mexican people standing around the airport seemed basically undeterred by the events. One enterprising individual carried soda around for sale on a bicycle. During totality one of the vendors was actually cycling along the airport runway. Illumination from the sun decreased gradually during the partial phases, then almost instantaneously dropped to zero as second contact occurred. You could read a digital watch in the moon’s umbra. 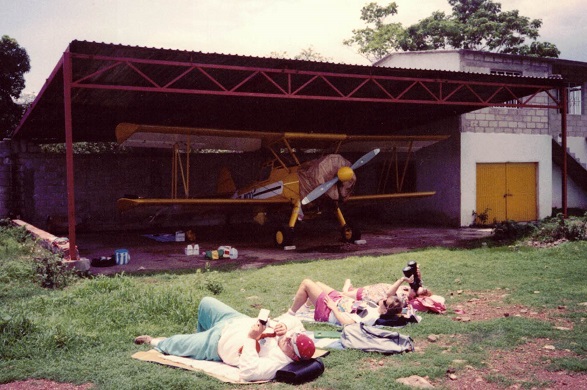 Jerry Dommerman, observing adjacent to a Mexican military encampment at San Blas lay down on a sheet to have a more comfortable view of the sun, which was positioned straight overhead. He recalled that the sheet collected about 100 sand burrs on it during totality. Low in the western horizon he found the sky appeared orange in color while the remainder of the sky unobscured by clouds seemed purple-blue. Jerry heard roosters crow during totality but they also did the same thing when the sun was 40% covered. At San Blas, thin clouds became thicker during totality yet observers got views and pictures of the corona and prominences despite these problems.

Those who chose to stay the Mazatlan eclipse site in front of the El Cid Hotel found that a hole in the clouds opened up during totality allowing them to view the corona and prominences. Observers who walked anywhere from 1 to 5 miles away in different directions were clouded out. Roger Rafler went to the top of the hotel and videotaped the darkening process with views of automobile headlights coming on in the traffic below. He only chose to photograph the sun for 10 seconds during the 5 minutes 30 seconds of totality and used the rest of the time to shoot around the horizon. As Roger panned his camera south, he commented on the one complete area which turned out to be directly above our other RING OF FIRE EXPEDITIONS group at Santiago Ixcuintla. Phil Muhm noted a vortex of sea birds swirling in from the ocean during totality, and he heard roosting noises from many other birds in nearby trees.

Back at Santiago Ixcuintla, a rocket was fired from the vicinity by the Spaceport Florida Authority; however, its payload failed to collect data on the solar eclipse. The vehicle called VIPER, carried an imaging radiometer. The sound of thunder heard by some observers was likely due to a nearby thunder storm rather than the rocket launch. 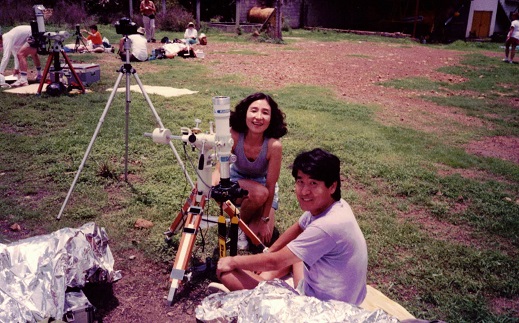 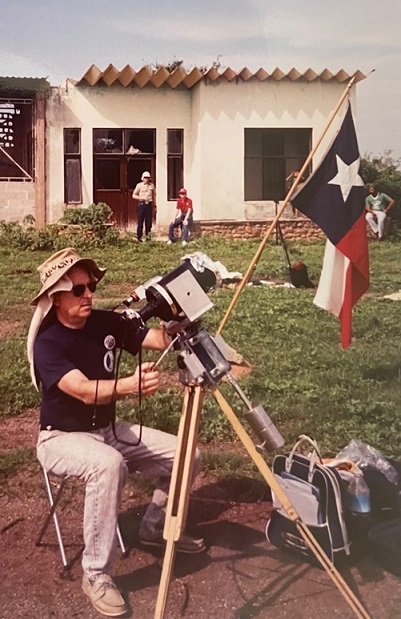 Paul Maley and Andy Saulietis shared time on a single telescope mount so each could both observe and eclipse and get good photos: a rarity during the eclipse mania. Takao Doi, a backup payload specialist on the Spacelab J Shuttle mission scheduled for a 1992 launch, attended his very first eclipse. He kept glued to his telescope and would not leave the site until after the end of 4th contact. Despite the simulation exercise conducted the day before, at least two observers failed to remove their solar filters during totality and, of course, got nothing on their photos. Brian States had come all the way from England only to have his video camera battery deplete just prior to the eclipse.

All-sky video taken by Andy Saulietis, showed darkening and return to light on a grand scale as the moon’s shadow swept over the airport. Another all-sky garden globe was photographed by Gail Schneider and videotaped by Jeff Hoffman. The still photos failed to reveal any zodiacal light due to the very thin cirrus clouds near the sun but no doubt also due to the bright sky. Stars to magnitude 1.5 were reportedly seen with the unaided eye. Venus shown brilliantly at magnitude -4.8. 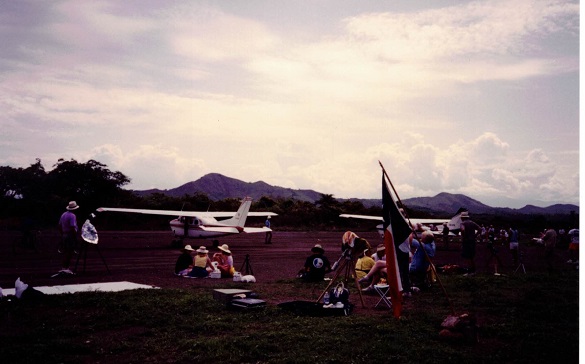 A view just before totality of airplanes/observers. 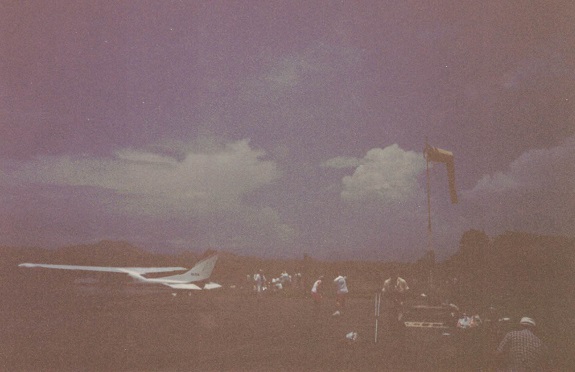 The same airplane during totality

The corona visually went out to 2 solar diameters, though the distance varied according to each observer. One outstanding prominence with the shape of a horse head intrigued everyone while two smaller ones appeared at the opposing limb. The moon’s diameter was so large that the prominences were slowly revealed instead of being observed around the moon’s circumference simultaneously. Nice diamond rings were spotted at both 2nd and 3rd contacts. The pink chromosphere was clearly visible along with Baily’s Beads at the end of totality. Brush strokes in the corona added to the magnificence of the sight. Coronal holes were also prevalent since a uniformly circular corona was expected but not seen. Several observers commented on the three-dimensional appearance of the outer corona. 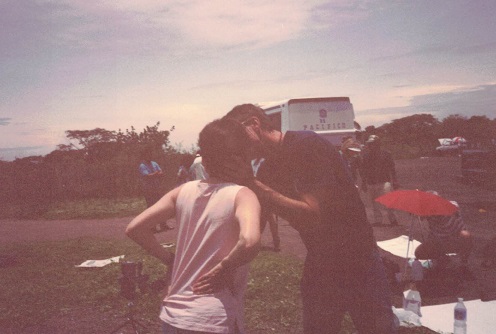 Emotions ran high as the eclipse proceeded and ended, with many declaring it to be the shortest seven minutes of totality ever. At least two couples were seen in emotional embraces after 3rd contact in celebration of a successful and remarkable experience. Carolyn Peterson did not notice shadow bands until after 3rd contact ended and called people over to look at the sight. They were clearly visible, shooting across the ground using averted vision. They flitted across like an apparition from the movie “Ghost Busters”. The bands provided an exciting end to the eclipse process. Two bus drivers managed to sleep completely through totality; hordes of flies migrated into the buses while their occupants were on the tarmac. 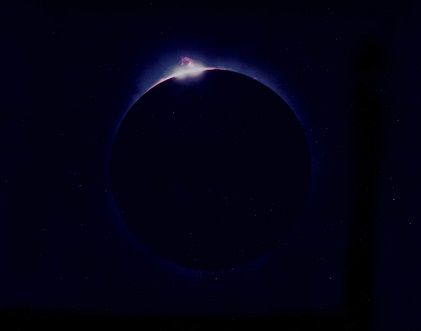 After the eclipse newspapers were examined for accounts of the eclipse. Battles between government forces and guerrillas in El Salvador were reported to have occurred during totality; 5 children and 2 adults in Honduras experienced eye injury as a result of unsafe practices observing the partial phases. 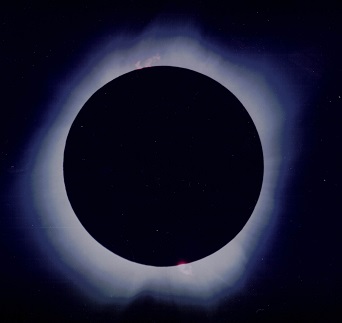 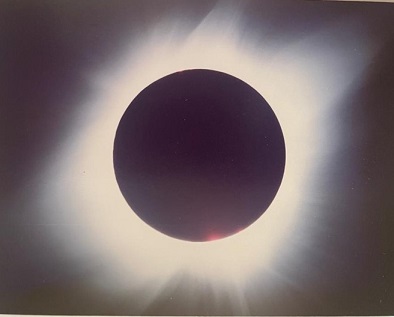 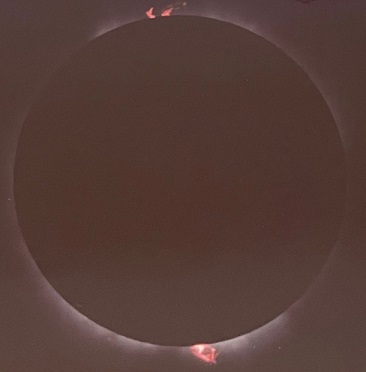 Prominences on both sides of the Sun. Paul Maley photo. 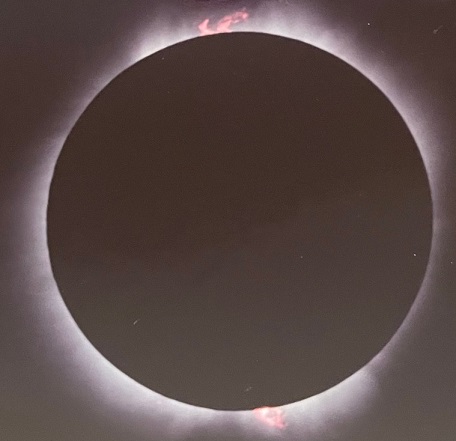 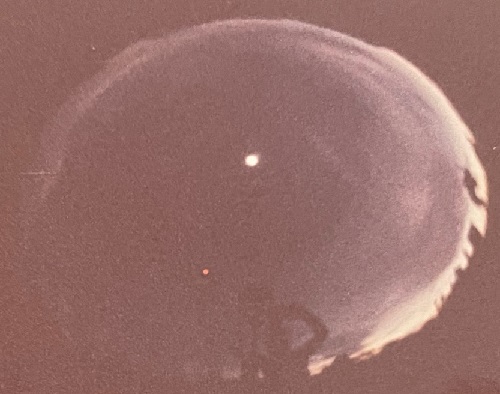 Fish eye lens taken during totality by Gail Schneider. Note the light area around the horizon where totality has not occurred. The Moon’s shadow is directly overhead here. 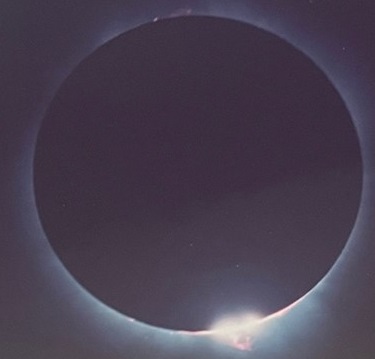 Prominence on one side disappears while the one on the other side prepares to be overwhelmed by a Diamond Ring. Paul Maley photo.

Some sample comments on the total solar eclipse were:

“A lot of tension in the air, not knowing whether we would see the eclipse or not. It was nerve racking”–Phil Muhm

“Totally mind-blowing. I was expecting something spectacular, but it was even more spectacular.”–Larry Mitchell

“Depressing! At the last minute, I took a cab to the lighthouse south of Mazatlan and was clouded over. I was feeling pretty good until I got back to the hotel and found that everyone who had stayed at the El Cid saw the eclipse!”–Perry Radoff

“The eclipse was the most exotic experience I have had in 20 years of observing.”–Paul Peterson