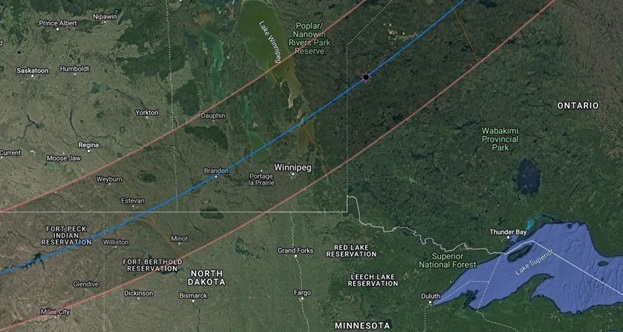 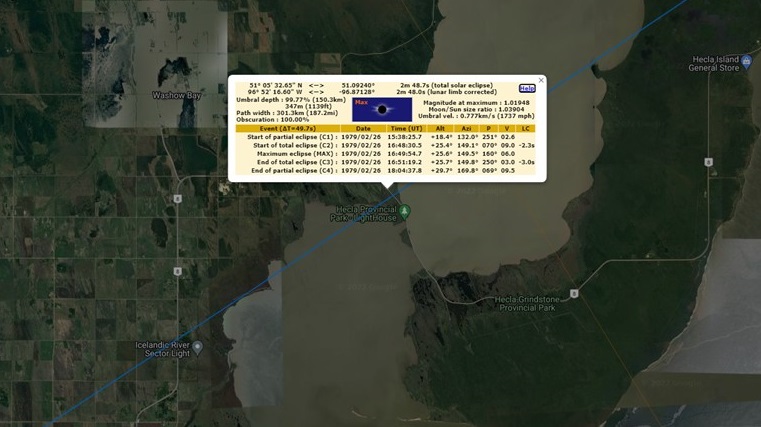 When you are in the path of the Moon’s shadow, a total solar eclipse doesn’t just happen–it happens to you.  Forty JSCAS team members and thousands of others found their senses overwhelmed by the drama of the Februray 26, 1979 total eclipse.  Lined up along the frozen shore of Lake Winnipeg under a crystal clear sky, members of the Johnson Space Center Astronomical Society joined Ring of Fire Expeditions’ latest eclipse trip to witness the movingly beautiful mid-morning darkness.  for some it was their first eclipse while for others it was their 6th or 7th. 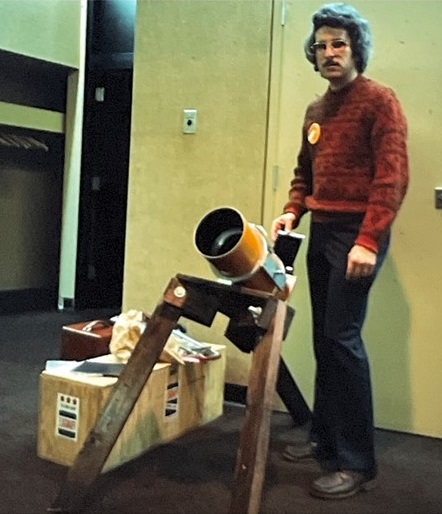 Setting up a wood camera mount after unpacking in the hotel.

Close to 11:00 am local time the shining white, snow-covered lake took on an eerie, steel gray color.  Excitement and anticipation grew to an inner frenzy as the world changed swiftly and unnaturally.  The view of the waning crescent of the Sun as the Moon moved in front of it was remarkable, but it did not give the first clue to the mesmerizing and overpowering splendor of totality.  As people began murmuring about the darkness rays of shadow-bands began streaming across the  snow. I did not notice them. These wavy, rippling shadows cued the main event.

People shouted when it happened. Normally eloquent adults were reduced to reactions like “wow!” while many became misty-eyed.  Heads were raised as one when the island was bathed in a blue darkness.  There was ice fog about but it did not impact photos. 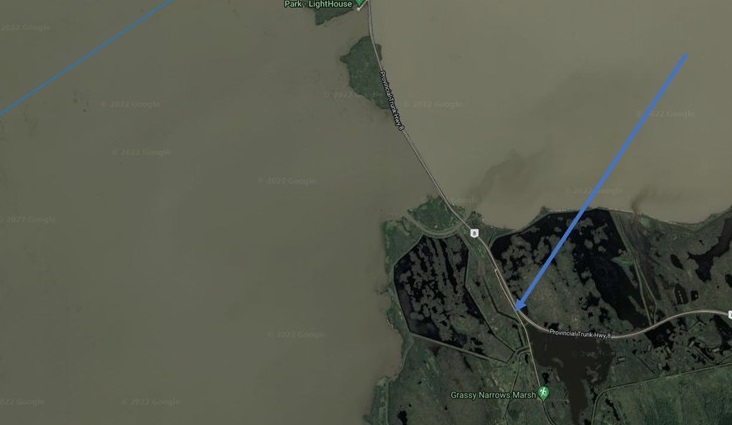 Estimated location of our group. Center line is the faint blue line in upper left.

The last point of sunlight was visible around one edge of the Moon as the glorious silvery-white corona was a halo to the burning black disc of the Moon called the Diamond Ring effect.  Small bright red beads made a ruby necklace around the Moon for a few seconds as recorded by some.  And then the Sun was completely gone. the corona blasted out and reddish orange solar prominences flared up on some spots along the edge.  Some planets and stars began to shine. Pink and peach tones washed the horizon like a 360 degree sunset.  Eyes widened, souls flew, shutters clicked and time stopped.

On Hecla Island where we were (north of Winnipeg) totality lasted 2 minutes 50 seconds.  But the experience produced an eternal indelible memory for the participants.  ” I count it among my five most precious memories” said Carlotta Wells who produces mini-transformers in Houston. She also includes her wedding among those memories.  “Every place I looked it seemed like dawn was coming up,” she said.  Marilyn Blackmon helped in an experiment to measure the elusive shadow bands preceding totality.  “No wonder people were so frightened by it in the past”, she said while the eerie light was shaking the senses of the scientific and romantic alike. 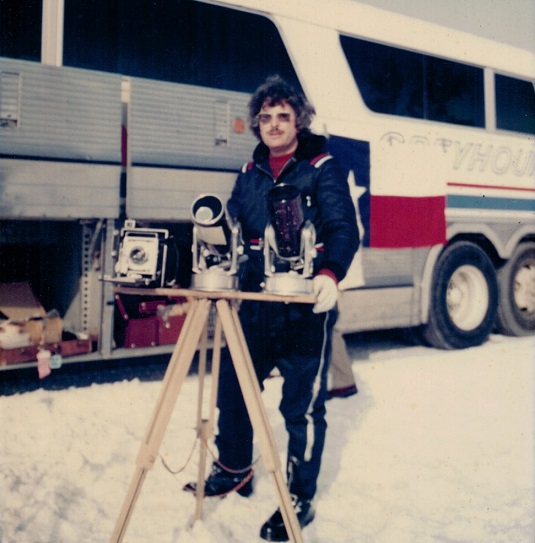 The author at the eclipse site with two Questar 3.5 inch scopes and a press camera.

“I’ve not seen anything as breathtaking except perhaps the first time I walked into the Astrodome”, said Stephen Smith of Houston.  Dorothy Steele of Austin watched the eclipse from her hotel room in Winnipeg. “I saw Winnipeg at night again, the buildings were lit up and there was a rose-colored horizon,” she said. This is exactly the reason our group bused out to Hecla—to avoid automatic lights coming on as darkness approached.

“I could see where you could get quite used to this,” said Alief astronomy and math teacher Ed Barton.  Along with a photographer friend he is planning to assemble an eclipse slide show for the Alief school district.  Dozens of scientific experiments were conducted along the path of totality.  It was my goal to take photos of the region around the Sun to see if I could detect a comet that might slide by during the eclipse, but none was noted.  Richard Rogan, NASA employee and JSCAS president took close up motion pictures of the total eclipse.  There were several science groups from around the US and Canada that rented aircraft to be sure they would not be clouded out of a good view.

Avid eclipse fans were strung along the path of totality from the coasts of Washington and Oregon to Greenland.   About 20,000 tourists went to the Winnipeg area (like us) where merchants capitalized on the solar event.  One could drink an eclipse cocktail, wear an eclipse t-shirt and eclipse buttons, paper a room with eclipse posters and get protection from the rain/snow with a special celestial umbrella.  A fried chicken restaurant offered special eclipse eye shields.  And a local chain saw company begged the wrath of many observers by flying an advertisement during the sacred moments of totality. 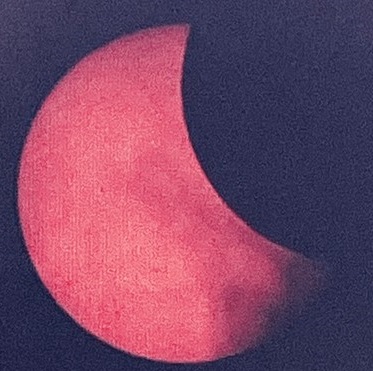 Clouds during the first half of the eclipse. 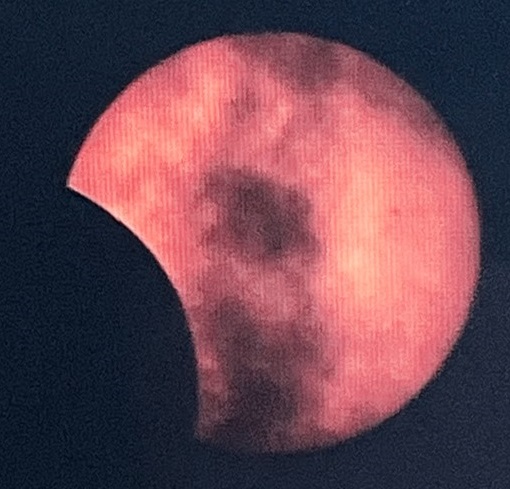 Cloud during the second half

The weather was ideal but as recently as 2:00am — nine hours before the total eclipse, weather predictions were not good.  Back in Houston where the eclipse was only partial, Houstonians sweated out the night praying for clear skies.  But luck was with the practiced and fair weather astronomers in Canada across the 175 mile wide path. Another successful trip for Ring of Fire Expeditions. 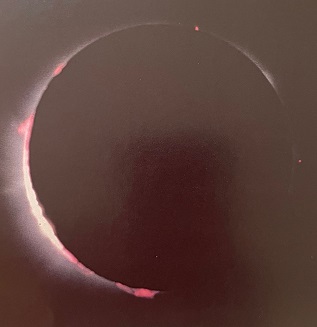 Photo of totality that I shot with a 3.5 inch Questar. Good enough to make the Questar brochure with the following commentary: 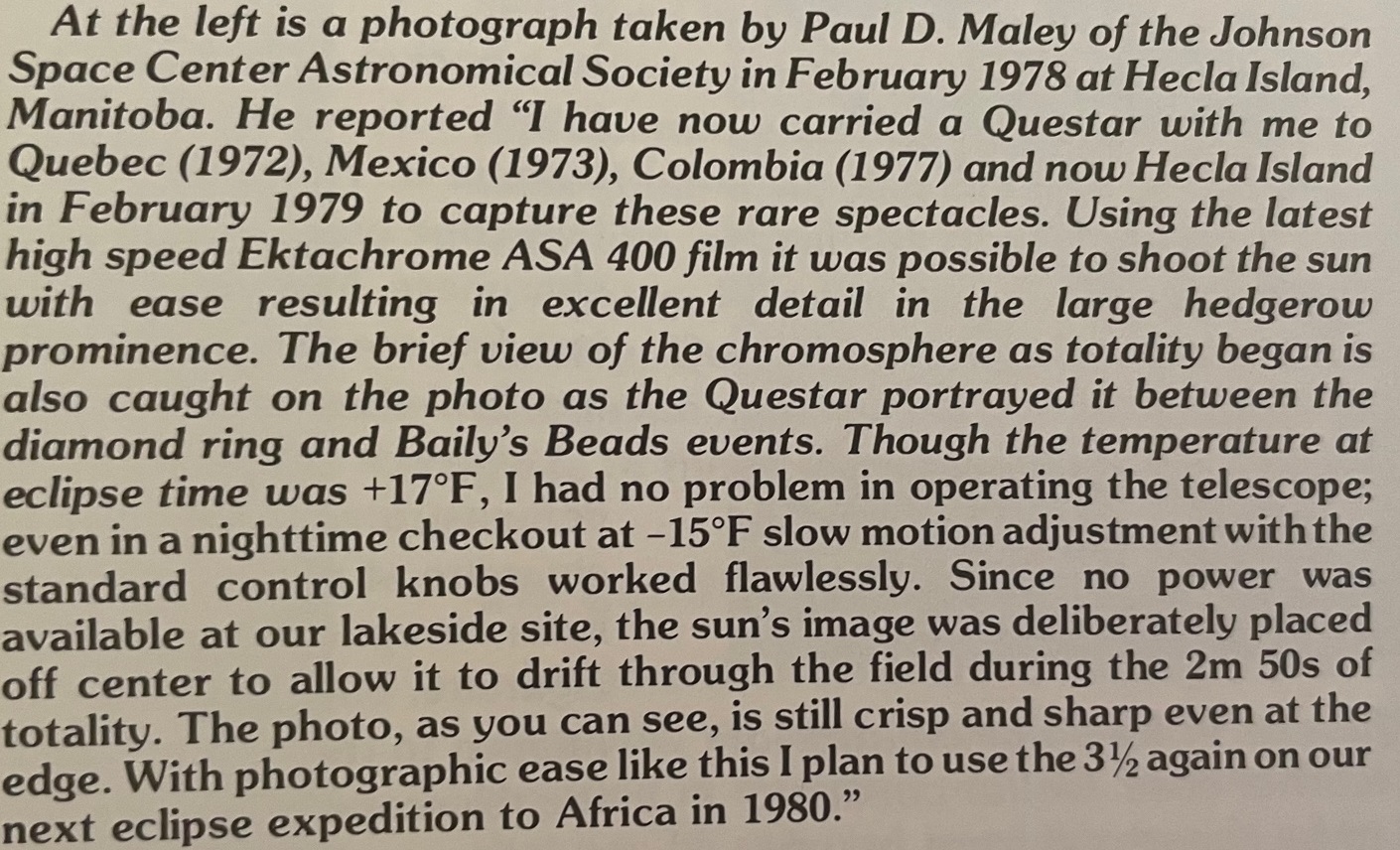