This total eclipse path occurred 2 years after my first expedition that resulted in being clouded out. I had higher hopes this time but noted that the path was severely constrained by the lack of roads and infrastructure in Quebec. There was one major road from Montreal to Quebec City and moving northeast along the coast of the Gaspe Peninsula. This being a rural area we had a very long drive from Houston, Texas to Cap Chat. We stopped along the way in Jackson, MS, Alexandria VA and Boston MA but after 3 days made it to the site area.

This time I was the one driving a yellow Datsun station wagon with an eclipse license plate and two others (Sallie McDonald and William Chanis) rode with me.

This eclipse occurred again on a Saturday and this time I had enough vacation time to arrive early and consider the possibilities in case bad weather approached. The options were not good. We chose not to go further northwest into Canada where weather prospects were equally variable and chose the most direct route to the path from Texas.

Once in the eclipse zone we drove about and inspected a number of professional sites that had been set up along the peninsula.

Our team posed for a photo prior to the eclipse. We picked up several other amateurs who joined us at our site.

At our small motel we ran into Roger Tuthill and several other amateur astronomers.

Paul Maley setting up a Maksutov 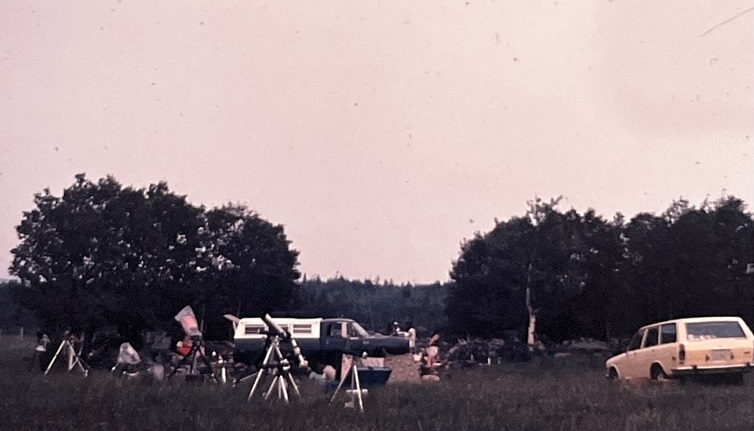 Our site in an overcast condition.

We set up at our selected site and waited to see if the weather would cooperate. It turned out that the cloud breaks failed to materialize at our location but we could see some open sky in other directions. 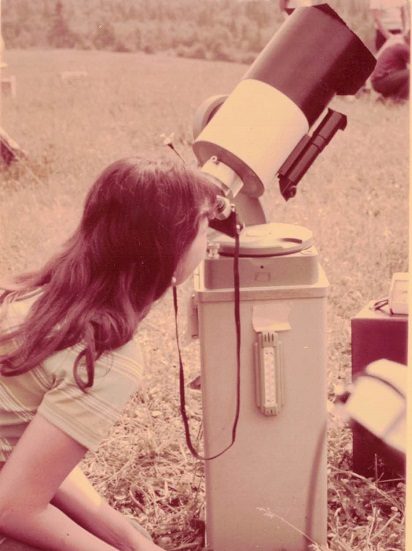 In the end the weather got us again; given the limited ability to move along the one road to Cap Chat there was no alternative location that we could have reached in time had we had enough certainty that it would be clear there.